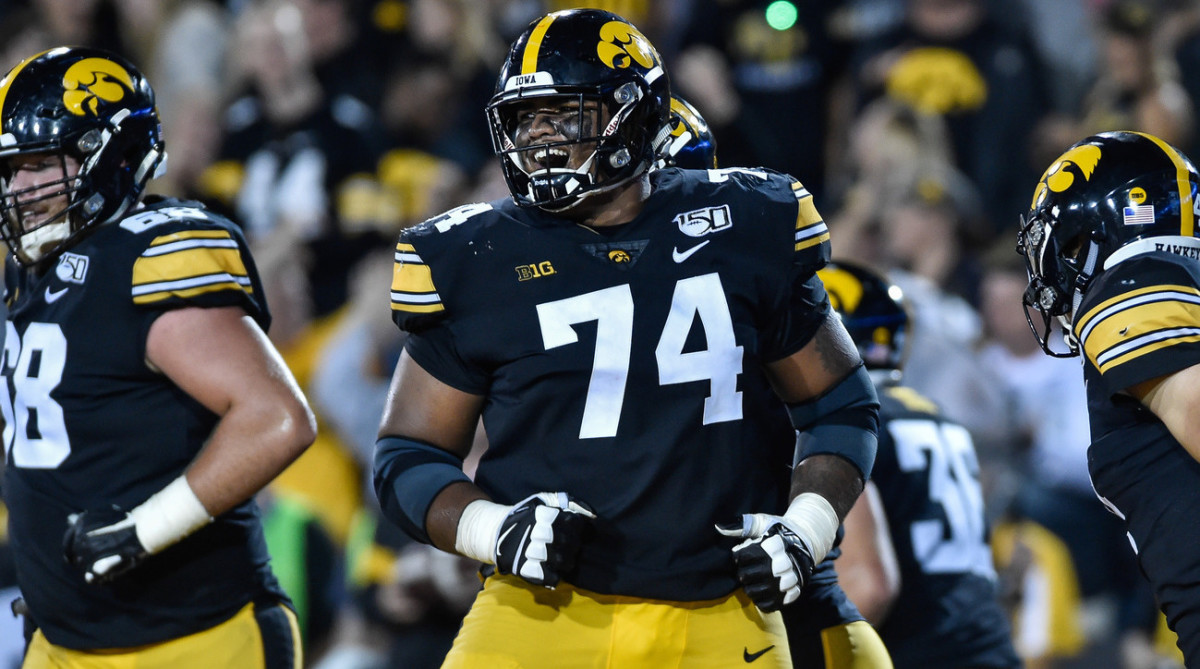 While big-name stars like Joe Burrow and Chase Young garner most of the headlines – let’s not forget about the unsung heroes in the trenches. From a tightly bunched group, several offensive linemen will be first-round picks when the 2020 NFL Draft begins on April 23 in Las Vegas, Nevada.

From a draft pool that’s brimming with talent, six offensive linemen have a legitimate shot at being taken during Round 1 of the draft. BetOnline has Tristan Wirfs, Mekhi Becton, and Jedrick Wills as close favorites to be the first lineman selected. Here are the top O-line draft prospects.

Following a three-year career in Iowa, Tristan Wirfs enters the 2020 NFL Draft as top chalk to be the first lineman selected. At 6-foot-5 and 322-pounds, Wirfs takes up a lot of space on the line plus he grades well in pass protection and run blocking. Boosting his draft stock, Wirfs was the top lineman during the NFL combine as he clocked the best time in the 40-yard dash plus finished first in the vertical and broad jump drills.

Another mountain of a man, standing 6’7” and weighing about 367 pounds, Mekhi Becton is right behind Wirfs as the second favorite. Becton played three seasons in Louisville and is a versatile lineman who can play at either tackle position. Along with his tremendous size, Becton has excellent athleticism, and he delivers punishing blows as an edge-protector. While his skill set needs some polishing, Becton is an NFL-ready prospect.

A next-level prospect after developing his skills at the NFL draft factory in Alabama, Jedrick Wills made 29 starts over three seasons. Wills is a solid pass blocker and he was the blindside protector for quarterback Tua Tagovailoa. He faced fierce competition in the Southeastern Conference. Wills plays with a mean streak. He plays aggressive at the snap and he delivers more blocks than he absorbs.

Beyond the top three favorites, Georgia tackle Andrew Thomas is a longshot to be the first lineman selected during the draft. The high price is somewhat surprising as Thomas helped D’Andre Swift, Nick Chubb, and Sony Michel rack up big rushing totals during his three years as a Georgia Bulldog. Thomas can play right or left tackle, and he is another NFL ready prospect that developed his skills against top-level competition.

Given the talent of the linemen listed above, the Field bet option is a longshot wager that should be avoided. Notable names in the field include Josh Jones from Houston, Austin Jackson out of USC, plus Boise State tackle Ezra Cleveland. While they will be taken at some point, all three players are second-tier prospects, and it’s doubtful any of them will be selected before the top four favorites.

There isn’t much separating the top three on this draft prop. Since pro-days are canceled, the NFL combine will be a lasting memory for scouts, and that gives Wirfs a slight edge. New York has the fourth overall pick and needs to get RB Saquon Barkley back on track. That makes longshot Thomas worth consideration as he returns a large reward on a small wager.