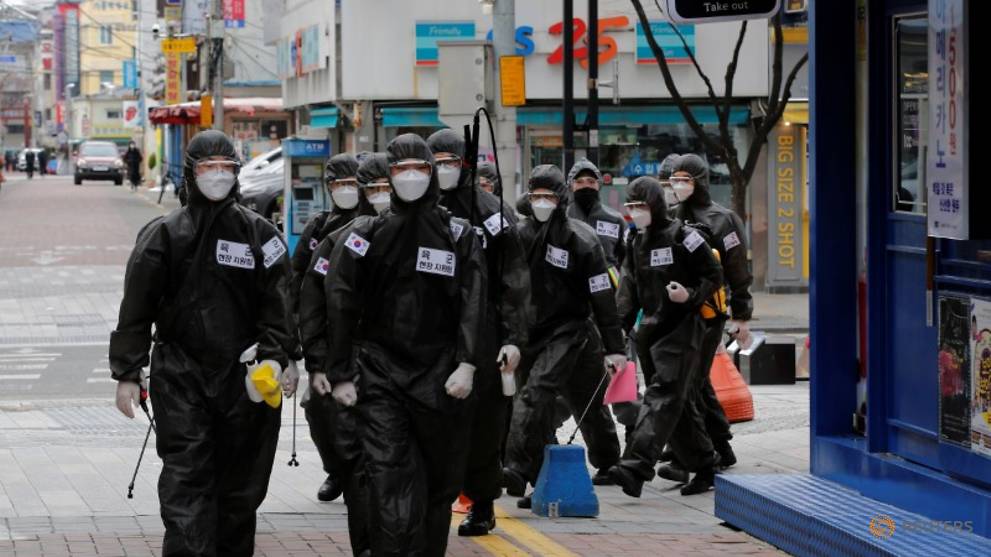 SEOUL: Members of a South Korean church scuffled with police on Sunday (Mar 22), media reported, as government restrictions on religious services and other gatherings due to the spread of the coronavirus took effect.

Authorities have urged South Koreans to stay home and maintain social distancing, as imported cases and new outbreaks around small clusters continued to emerge while an overall tally in new infections has been declining.

Restrictions on high-risk events such as religious, sports and entertainment gatherings took effect on Sunday, requiring facilities to ensure space between the attendees and allowing local governments to conduct on-site checks and issue fines.

“Our fight against the virus is a three-legged race,” President Moon Jae-in said on Sunday, referring to the need for the community to work in step with the government. “It doesn’t matter even if you are not sick and doing well by yourself.”

Most churches have turned to online services over the past few weeks, but local media said there were several that pushed ahead with physical gatherings on Sunday, prompting scuffles with police and protests by residents calling for disbanding.

A video uploaded by a purported member of the church on YouTube showed a woman lying on the ground while another was heard shouting “Why are you doing this? Is this North Korea?”

Yonhap quoted a city official as saying the church did not follow rules and ensure sufficient space among the attendees.

Reuters was not immediately able to reach the police or the Seoul city government for comment and calls to the church for comment were unanswered.

Elsewhere, Yonhap news photos showed a group of residents staging a rally in front of the Yonsei Central Baptist Church in Seoul, holding up a sign calling for a halt to services for the safety of neighbours.

More than half of South Korea’s cases were traced to a fringe Christian church in the hard-hit southeastern city of Daegu. This week, some 60 members of a Protestant church in Seongnam, south of Seoul, have also tested positive this week.

The daily tally marked the 11th day in a row the country has posted new infections of around 100, compared with the peak of 909 cases recorded on Feb 29.

The KCDC renewed caution for overseas travellers on Sunday, after the government toughened border checks and imposed a two-week mandatory quarantine for all long-term arrivals from Europe due to a spike in returnee cases.

At least 15 travellers tested positive on Saturday, the KCDC said, eight of them from Europe and three from the United States. Most of them were South Koreans.

“We’re implementing intensive social distancing over the next 15 days,” KCDC deputy director Kwon Jun-wook said at a briefing. “After that, we will open schools and return to a regular life cycle in the face of the battle on the coronavirus.”