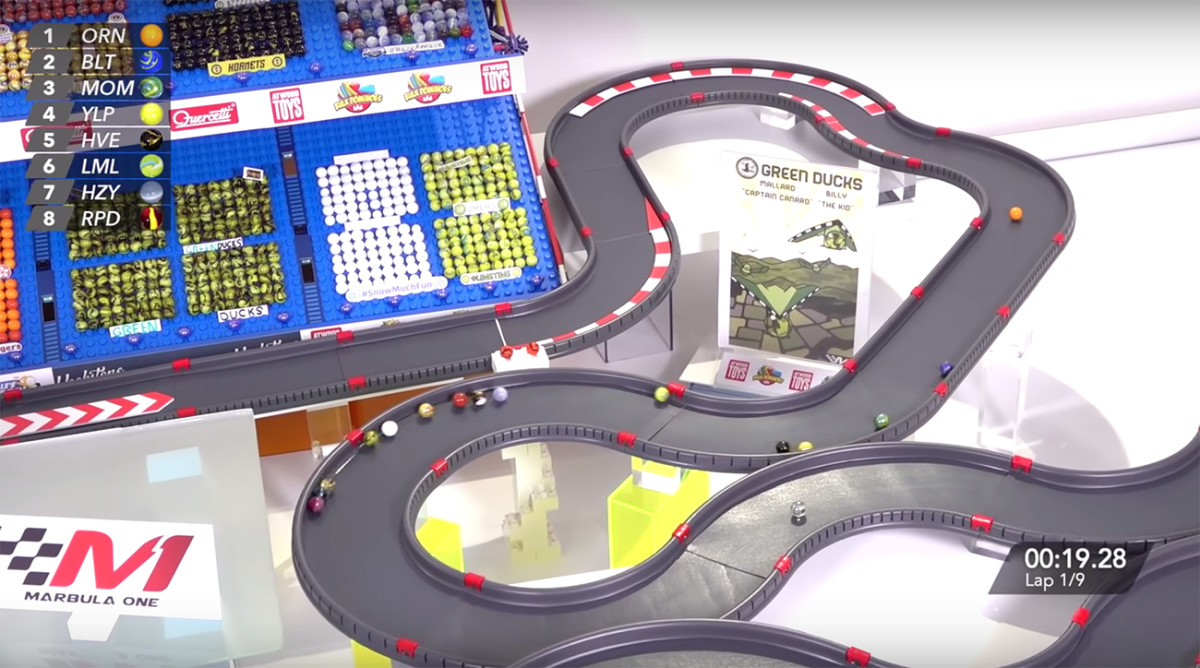 Greg Woods first stumbled across Jelle’s Marble Runs on Reddit, naturally. He clicked on a video link and watched a dozen or so marbles bounce off dirt walls and each other as they rolled down a sandy racecourse.

“This is just natural sound,” Woods thought to himself. “This would be kind of fun if I called it like it was a Formula One race or something, just for the heck of it.” That was the moment that Greg Woods, Marble Race Commentator was born.

Since 2015, millions of people have listened to Woods’ calm, compelling voice commentate events for Jelle’s Marble Runs, a popular YouTube channel dedicated to the sport (yes, sport) of marble racing. That number has grown exponentially in the past week, as the coronavirus pandemic forced sports leagues around the world to suspend their seasons and events for the foreseeable future, leaving fans yearning for competitive action.

Since March 16, Jelle’s Marble Runs subscribers have increased more than 999% and video views are up a remarkable 339% according to Front Office Sports. As the kids say: marble racing is having a moment. The sudden onslaught of marble racing enthusiasts seems to stem from a March 15th tweet, where a video from one of Jelle’s early YouTube races was ripped and posted with the caption: “Day 4 without sports: Marble1 racing is intense!” As of March 22, the tweet has more than 34 million views and 240k retweets.

“It really left this vacuum for people to try to find something to appease their appetite for sports,” says Woods of the pandemic. “And for whatever reason, [marble racing] seems to match up really well with the type of passion that a lot of people have, whether it is rooting for an underdog or a great comeback or an unexpected performance.”

If you don’t know how a marble can have breakout potential or win an event as a sleeper competitor, then you’ve never watched Jelle’s Marble Runs. Created by masterminds Jelle and Dion Bakker, the action rivals any sports league. It’s not surprising, considering Jelle estimates that he spends up to eight hours a day building tracks and inventing storylines for his marbles. Every marble has a name, like Bumblebee or Ghost Pearl, based on color and size. (I learned this the hard way, when I tweeted about one marble, calling it “blue marble” instead of by its appropriate name, Comet.) The marbles have personas and backstories, too. Fans follow along, picking teams and cheering on their favorite competitors (via the comment section), just as they would in any other sport. “The Green Ducks finally not only get on the podium but take the gold!” one fan commented. “Man, it is tough being a Snowballs fan,” another wrote.

Beyond the appeal of the competitors and races, it’s the expert commentary from Woods that truly makes the sport special. The wide world of marble racing goes beyond the Sand Marble Rally event, the outdoor sand track that Woods first saw on Reddit and the one that circulated on Twitter last week. Jelle’s Marble Runs feature multiple events, all depending on the sport’s calendar, which means Woods must adjust his commentary and maintain an understanding of the changing courses, surfaces and competitions.

March is Marbula1 season, which has an eight-race calendar with one race per week. The Marble League, formerly known as the MarbleLympics, will take place later this year around the same time that the human Olympics are set to begin late July in Tokyo. The MarbleLympics features more than a dozen Olympic-inspired events, such as high-jump, balance beam, slalom, sprinting and more, spread over two weeks. This year, Team Galactic is hosting MarbleLympics, so expect them to have slight home-court advantage. Just like the human Olympics, MarbeLympics has strict qualifiers and intense finals, all narrated by Woods. There’s even an Opening Ceremony. As one commenter wrote during last year’s MarbleLympics, “I’d rather watch this than the real Olympics.”

As the voice of marble racing, Woods faces constant challenges in bringing the tiny, colorful spheres to life. During speed events like the Sand Marble Rally, Woods rattles off lead changes like he’s Larry Collmus calling the Kentucky Derby. “A lot of it is trying to figure out what to say about things to describe them…especially when you get into the Marble League itself, where there are all these super random events,” he says. “How do you describe a marble doing a high jump or a balance beam or things like that?”

Because there really aren’t a lot of terms to describe the marbles during competition, Woods says it’s been a learning process, but he has improved over the years by watching how the marbles move and react to certain elements during each event. Woods has never met the masterminds behind Jelle’s Marble Runs. Jelle and Dioin live in the Netherlands, where they toil over intricately designed courses, churning out race after race to an online frenzy. Over the years, Jelle’s Marble Runs has expanded significantly, with sponsorships from Seat Geek, and fans who keep record of every event on Reddit and Wikipedia. There’s even a dedicated publication for the sport, titled Rollout Magazine.

Woods has watched in disbelief as celebrities, athletes, media outlets, and sports fans around the world have suddenly discovered a voracious appetite for marble racing. “Jabrill Peppers was one of them. Pete Wentz from Fall Out Boy was another one. It [all] kind of came out of nowhere,” Woods says.

Much in the way that golf can offer a comforting watch on a lazy Sunday, the smooth voice of marble racing’s Jim Nantz can do the same. “It carries those central tenants of sports along with this atmosphere,” Woods says. “I’ve never been a shouter—some commentators are really big in that—but I am a little bit more measured with things.”

Marble racing is mesmerizing, therapeutic, and most importantly, it requires no human contact. “The world that the marble sports takes place in is very measured in a lot of ways,” Woods says. “Yes, we’ve had fights in the stands. And we’ve had all these controversies, like a streaker going down the course every once in a while. But overall, it’s good natured.”

Marble racing is here to save us from a world without sports. The world-building that Jelle and Dion have invented is one that any tired, anxious or bored person can jump into and play around in—especially during a quarantine.

“I think it creates a little bit of escapism from the world that we’re currently in and the sports world that we’re used to,” Woods says. “What you see with this is what you get. There’s no drama behind the scenes or you know, unscrupulous things happening off camera and stuff. It’s athletes competing and you get sucked into it, even though it’s…marbles.”