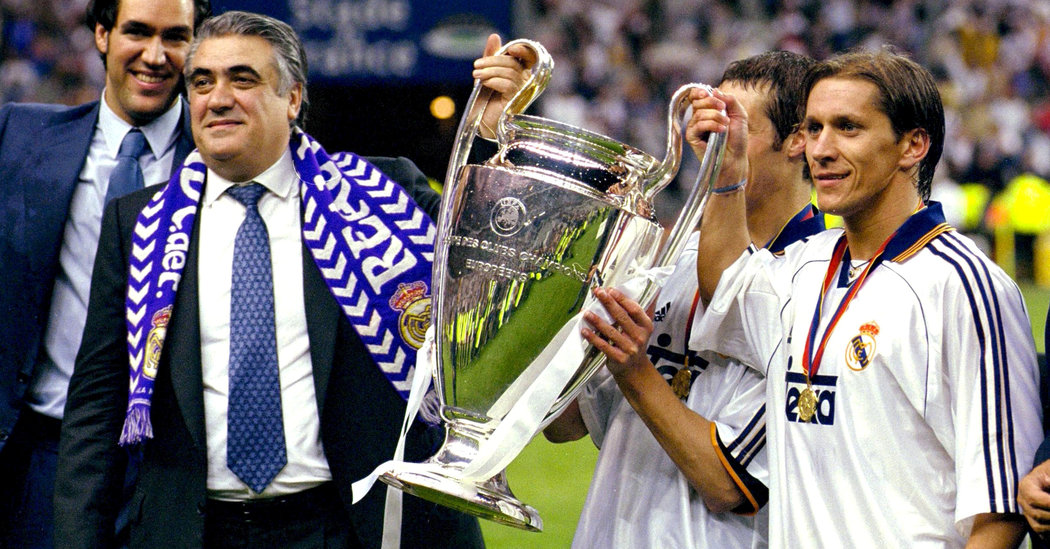 Lorenzo Sanz, the former president of Real Madrid who helped return the Spanish soccer club to victory in Europe’s top competition after more than three decades, died on Saturday in Madrid. He was 76.

The cause was the coronavirus, his family said.

Mr. Sanz entered a Madrid hospital on Tuesday with a fever. He tested positive for the virus and also had kidney failure, according to local news media reports. The Madrid region has been the epicenter of the coronavirus in Spain, accounting for about 60 percent of the 1,750 people who have died from the outbreak across the country.

Mr. Sanz was president of Real Madrid from 1995 to 2000 and is credited with ending the club’s 32-year wait for another victory in what is now the European Champions League, which Real Madrid won in 1998 by beating Juventus in the final in Amsterdam. Two years later, Real Madrid won the competition again, beating Valencia in Paris.

The team also won one league title, a Spanish Super Cup and an Intercontinental Cup under Mr. Sanz.

In 2000, Mr. Sanz narrowly lost an election battle and was replaced as the club’s president by Florentino Pérez, a construction tycoon who still leads the club.

In a message released by the club, Mr. Pérez lamented the loss of Mr. Sanz, as well as the fact that Spain’s lockdown to fight the coronavirus made it impossible for anybody to pay Mr. Sanz proper homage for the time being.

In reference to the 1998 European victory, Mr. Pérez said that Mr. Sanz would be remembered by Real Madrid’s fans as “the president who brought us back hope and joy.” By winning the European competition again only two years later, he added, “Real Madrid got back the place that belonged to it in history.”

Born on Aug. 9, 1943, in Madrid, Mr. Sanz played soccer in his youth as a goalkeeper and became a successful businessman, mainly by buying real estate around Madrid. In 1985, he was appointed a director of Real Madrid. A decade later, he took over a heavily indebted club from the president who had invited him to join the board, Ramón Mendoza.

During his five years as president, Real Madrid swapped coaches several times (the 1998 Champions League was won by Jupp Heynckes while that of 2000 was under Vicente del Bosque) and also reshuffled the squad significantly. Mr. Sanz also made some ambitious deals for players, including what was at the time the club’s record purchase of the French forward Nicolas Anelka from Arsenal in 1999, for about $34 million.

After the team won the Champions League in 2000, Mr. Sanz decided to hold an early election, but the move backfired. He was defeated by Mr. Pérez by just over 3,000 votes among the club’s 100,000 members, who pay an annual fee and hold the right to elect the club’s president.

He then tried unsuccessfully twice to regain the presidency, also failing in a bid to take over Parma, the Italian club that had been plunged into crisis by Parmalat, the dairy company that collapsed in one of Italy’s biggest fraud scandals.

Instead, in 2006, Mr. Sanz bought the Spanish club of Málaga, which he then sold four years later to a member of Qatar’s ruling family.

In recent years, Mr. Sanz ran into legal problems linked to his business deals and tax payments. In 2018, he was sentenced by a Madrid provincial court to three years in prison and a fine of 1.2 million euros for tax evasion. But his appeal dragged on and he did not go to jail.

Mr. Sanz is the most prominent person to have died from the coronavirus in Spain, which has been the European country worst hit after Italy. In an interview this week with the Cope radio station, his son Fernando said that his father had tried to battle the fever at home for eight days, before finally going to hospital, because he didn’t want to burden a Spanish health system already strained by the number of coronavirus patients.

In addition to his son Fernando, Mr. Sanz is survived by his wife, Mari Luz; his other sons Lorenzo and Francisco, and his daughters Diana and Malula, who is married to a former Spanish soccer star, Míchel Salgado.