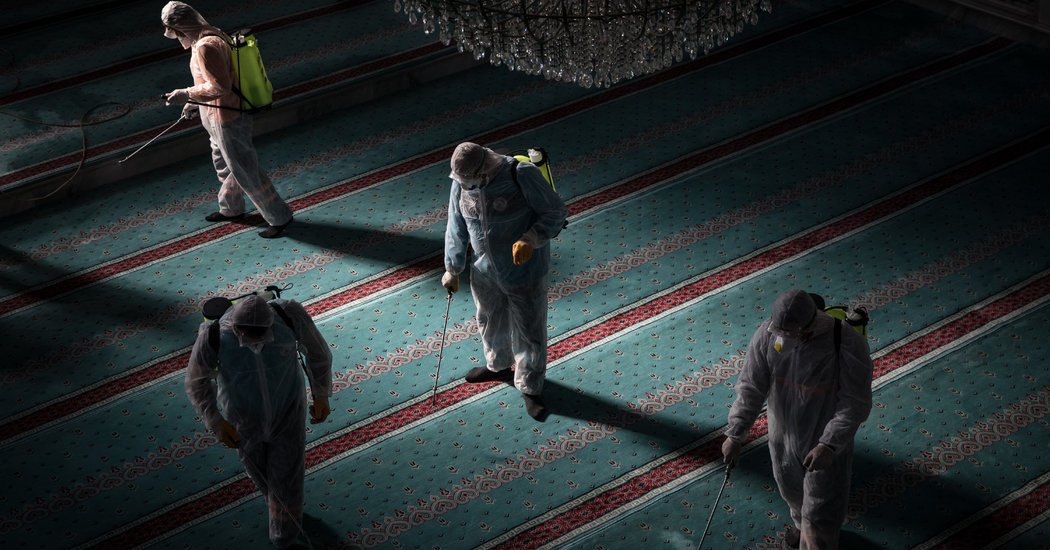 BEIRUT, Lebanon — Down on earth, the coronavirus outbreak was felling lives, livelihoods and normalcy. A nation-spanning blessing seemed called for. So up went a priest in a small airplane, rumbling overhead at an epidemiologically safe distance from the troubles below, wielding a sacred golden vessel from a cockpit-turned-pulpit.

Before his flight over Lebanon, a soldier at an airport checkpoint asked the Rev. Majdi Allawi if he had a mask and hand sanitizer.

“Jesus is my protection,” said Father Allawi, who belongs to the Maronite Catholic Church. “He is my sanitizer.”

Religion is the solace of first resort for billions of people grappling with a pandemic for which scientists, presidents and the secular world seem, so far, to have few answers. With both sanitizer and leadership in short supply, dread over the coronavirus has driven the globe’s faithful even closer to religion and ritual.

Believers worldwide are running afoul of public health authorities’ warnings that communal gatherings, the keystone of so much religious practice, must be limited to combat the virus’ spread. In some cases, religious fervor has led people toward cures that have no grounding in science; in others, it has drawn them to sacred places or rites that could increase the risk of infection.

In Myanmar, a prominent Buddhist monk announced that a dose of one lime and three palm seeds — no more, no less — would confer immunity. In Iran, a few pilgrims were filmed licking Shiite Muslim shrines to ward off infection. And in Texas, the preacher Kenneth Copeland braided televangelism with telemedicine, broadcasting himself, one trembling hand outstretched, as he claimed he could cure believers through their screens.

The anchors of religious practice have taken on a greater urgency just as religious authorities move to restrict them.

An Egyptian pharmacist, Ahmed Shaban, 31, traveled to Saudi Arabia this month to make a pilgrimage to Prophet Muhammad’s birthplace and tomb. Millions of Muslims throng the sites every year, many of them pausing to kiss the Kaaba, the black-and-gold cube in Mecca that is Islam’s most sacred shrine.

“In times of hardship, fear or panic,” Mr. Shaban said, “either you think, ‘How can God do this to us?’ or you run to him for protection and for guidance, to make it all make sense.”

The day Mr. Shaban’s visit was scheduled, the Saudi government suspended all pilgrimages to Mecca and Medina indefinitely. This month, Al Aqsa Mosque in Jerusalem closed for prayer, making it a clean sweep: Islam’s three holiest sites were now off-limits.

With good reason, at least from a medical standpoint: Coronavirus outbreaks have been linked to a South Korean church, a gathering of 16,000 faithful at a mosque in Malaysia and an Orthodox Jewish congregation in New Rochelle, N.Y.

But social distancing can leave the faithful feeling distant from God. How do you receive the body and blood of Christ when the communion cup might be a vector? How do you feel the warmth of communal prayer, the experience that draws the faithful to houses of worship around the world, in the cold blue light of a live-streamed service?

Rabbi David Lau, the Ashkenazi chief rabbi in Israel, called upon Jews to say 100 blessings daily, as King David did when confronted with a plague. The Sephardic chief rabbi, Yitzhak Yosef, urged Jews to “petition the Almighty to stop the epidemic and to leave his throne of judgment and sit instead on the throne of mercy.”

The Coptic patriarch of Egypt, Pope Tawadros II, said the pandemic was a wake-up call to repent. “If there are differences between people,” he said in a sermon, “this is the time for reconciliation.”

In a world where so many routines have been obliterated, it is the rites themselves that many cherish.

“I’m taking precautions in my life generally against the virus, but communion is the body and blood of God,” said Monica Medhat, 26, an executive at an Egyptian brewery who is a Coptic Christian. “It can’t get infected with anything.”

If anything, the times have strengthened her faith.

“I believe everyone dies when they’re destined to die,” she said. “It doesn’t matter if it’s from a virus or a car accident. God help us all.”

People may have already unknowingly spread the virus in the name of piety.

Despite New York’s recent bans on large gatherings, several large weddings went ahead in Brooklyn’s Hasidic Jewish communities, which have reported a spike in confirmed cases in recent days.

Iran is home both to one of the world’s worst outbreaks and to dozens of major Shiite Muslim shrines, which have remained open to crowds for weeks even as the coronavirus left the country shellshocked.

When the government finally heeded health officials’ pleas and shuttered two popular shrines in the cities of Mashhad and Qum on Monday, crowds of the faithful pushed in, Iranian state media reported, shouting, “The president is damn wrong to do that!”

India has so far refused to call off an annual festival that starts Wednesday in honor of the god Ram, also known as Rama. In normal times, it draws as many as a million people to Ayodha, which some believe to be the birthplace of Ram, in the northern state of Uttar Pradesh.

The state has asked devotees to celebrate at home this year. Organizers, however, are carrying on.

“People are getting the opportunity to have glimpses of Lord Rama,” said Vinod Bansal, a national spokesman for the group, Vishva Hindu Parishad. “It’s not appropriate to deprive them of this opportunity.”

Many faiths are adapting to the new reality.

Houses of worship are closed or empty. Holy water is splashed from individual bottles instead of a font. Friday Prayer has been canceled across the Middle East. Muezzins in the West Bank and Kuwait entreat the faithful to avoid the mosque and instead pray at home.

This will be the fourth week without Mass across Italy. But in the Sicilian city of Palermo, the mountain sanctuary of Saint Rosalia, who is believed to have saved Palermo from a plague in 1625, remains open.

Under current government restrictions, Italians are not supposed to leave home except for emergencies. But the Rev. Gaetano Ceravolo, the sanctuary’s chief caretaker, said around 40 pilgrims had nevertheless trekked up to the shrine last Sunday, praying briefly and far apart from one another.

“For us, she’s a friend, a point of reference,” said Francesco Tramuto, a member of the group that has carried the saint’s reliquary through Palermo yearly for three centuries. “Others may be devoted to the Virgin Mary, but for Palermo, she is the expert in plagues.”

In Israel, all three main Abrahamic faiths have sought to accommodate the faithful without endangering them.

The Western Wall’s plaza has been subdivided into smaller prayer areas to discourage large groups, and synagogues held services with smaller quorums and told the high-risk to stay home. West Bank churches were closed. On the Temple Mount in Jerusalem, known to Muslims as the Noble Sanctuary, Muslims were allowed to pray only outside.

The internet offered a sterile way to worship from home. The Pope’s Mass was live-streamed. So was a burning rite to dissipate the virus at the Kinpusen-ji Buddhist temple in Japan. South Korean churches offered YouTube-only services for the first time anyone could remember.

To the dismay of religious leaders in South Korea, whose congregations gathered through Japanese occupation and war, worship services have attracted unusual scrutiny there. A majority of South Korea’s 8,800 cases have been traced to a large, unconventional church in the southeastern city of Daegu.

“I am so sad that a place of prayer and solace has become a place of fear,” said Kim Jeong-ja, 58, a churchless churchgoer in Seoul. “I wonder how long this will last. Praying online watching YouTube is not like going to your church on Sunday.”

Amid the coronavirus anxiety, it was perhaps inevitable that some would interpret the pandemic as a divine missive. What it said was less clear.

Some Egyptian Muslims expressed certainty on social media that God was smiting non-Muslim countries by giving them the virus, apparently unaware that Egypt has registered nearly 200 cases and may have many more uncounted. Some Islamists, especially supporters of the banned Muslim Brotherhood, cast the outbreak as punishment for the Egyptian public’s support of the military takeover that brought the country’s authoritarian leader, President Abdel Fattah el-Sisi, to power in 2013.

Video emerged last week of Hindu activists in India drinking cow urine to stave off the coronavirus. At the Lebanese government hospital where infected patients are being treated, a woman recently arrived carrying a mixture of holy water and dirt dug from the mausoleum of Saint Charbel, who is revered among Lebanese Christians. Some Christians were said to be drinking similar solutions as a precaution.

Hospital administrators tested the soil and, finding it unlikely to cause harm, consented to keep it for any patients who might find it comforting. Who were they to judge? a hospital official said.

It was high time, in any case, for a miracle.