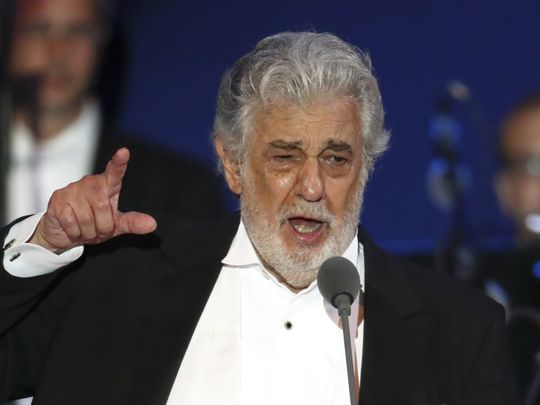 Superstar Placido Domingo has resigned from the US union that represents opera singers and will contribute $500,000 (Dh1.8 million) to sexual harassment eradication programmes and a fund that helps opera employees in crisis, the union said on Friday.

The development came weeks after investigations by the American Guild of Musical Artists and Los Angeles Opera found sexual harassment allegations against the famed tenor, now 79, to be credible.

The investigations were launched after the publication of Associated Press stories last year in which multiple women accused Domingo of harassment and abusing his power while he held management positions at LA Opera and Washington National Opera.

AGMA announced that its four-month investigation found Domingo had “engaged in inappropriate activity, ranging from flirtation to sexual advances, in and outside of the workplace.”

Details of the allegations were not released, but people familiar with the investigation who spoke to the AP on condition of anonymity said investigators found 27 people were sexually harassed or had witnessed inappropriate behaviour by Domingo in the 1990s and 2000s.

LA Opera said its investigators had received 10 accusations that Domingo engaged in “inappropriate conduct” with women between 1986 and 2019. Domingo helped found the LA Opera in the 1980s and led the company as general director from 2003 until last October, when he stepped down after the allegations surfaced.

In announcing Domingo’s resignation, AGMA also said the union had withdrawn disciplinary charges filed against singer as a result of its investigation. Disciplinary action could have ranged from fines to expulsion.

Union officials contacted by the AP said they had no additional comment, and Domingo’s representative did not immediately respond to a request for comment.

The opera world has effectively been shut by the coronavirus pandemic, which has halted travel and led companies across the globe to close theatres indefinitely, leaving much of the industry unemployed.

The union has encouraged members affected by the crisis to apply for financial assistance to its relief fund.