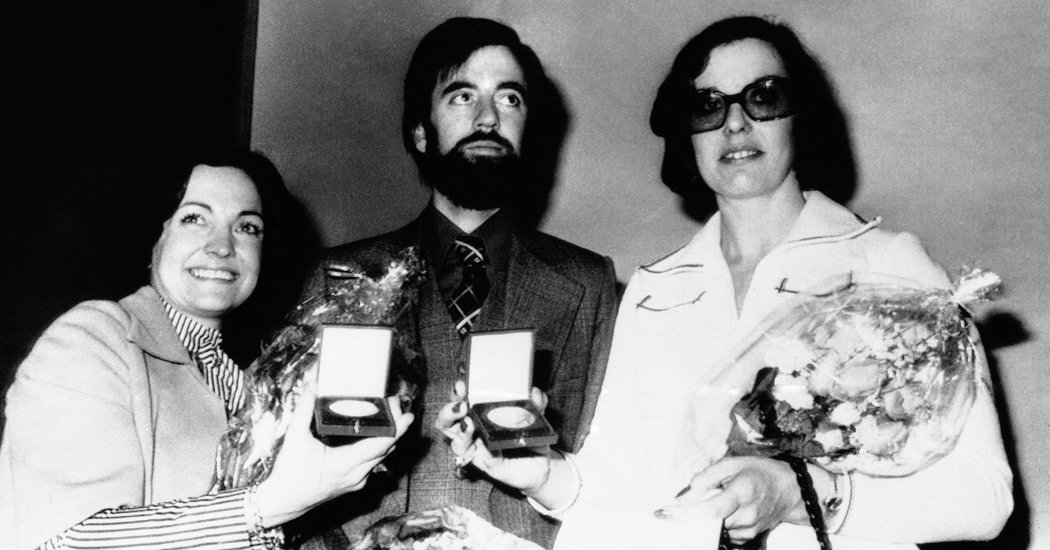 Betty Williams, a grass-roots activist who shared the 1976 Nobel Peace Prize as a founder of a protest movement that mobilized tens of thousands of people to demand an end to the sectarian violence in Northern Ireland known as the Troubles, died on Tuesday. She was 76.

Her death was announced on the Nobel Peace Prize website, which provided no further details.

An office receptionist from West Belfast, Ms. Williams witnessed an incident on Aug. 10, 1976, in which an Irish Republican Army gunman swerved his car onto a pavement, killing three children from one family and seriously injuring their mother, who later took her own life. The gunman had himself just been shot, fatally, by pursuing British soldiers.

Shocked, Ms. Williams quickly organized a petition to protest the continuing violence, collecting thousands of signatures in her district, Andersonstown. Days later, she joined with the dead children’s aunt, Mairead Corrigan, and the journalist Ciaran McKeown to form a mass protest movement, initially known as the Peace Women and later called the Peace People. (Mr. McKeown died in September.)

Their grass-roots movement galvanized mass protests in Northern Ireland and Britain demanding an end to the violence, between mainly Roman Catholic republican militants, who wanted a united Ireland, and soldiers and police forces defending Northern Ireland’s membership in the United Kingdom. Protestant militants also contributed to the conflict, which claimed at least 3,500 lives from 1968 to 1998, when a peace agreement was signed by Britain, Ireland and Northern Irish parties.

Although the Troubles were to drag on for 22 years after the founding of the movement, the Peace People were the first sign of mass public resistance to paramilitary violence in Northern Ireland, uniting members of the Catholic and Protestant communities. Many believed that it contributed to a sharp reduction in the number of killings in Northern Ireland after 1976.

Ms. Williams and Ms. Corrigan were jointly awarded the Nobel Prize. Mr. McKeown was not recognized by the Nobel committee (though many thought he should have been), perhaps because the Peace People had originally been perceived as a women’s movement.

In her acceptance speech, Ms. Williams said that “the deaths of those four young people in one terrible moment of violence caused that frustration to explode, and create the possibility of a real peace movement.”

“As far as we are concerned,” she continued, “every single death in the last eight years, and every death in every war that was ever fought, represents life needlessly wasted, a mother’s labor spurned.”

The Peace People initially faced down violent opposition by the I.R.A. — participants in the first Peace Women march in Belfast were assaulted, accused of collaborating with the British — but the momentum behind the movement ebbed, and there were disagreements among the three leaders over strategy and funding. Since the late 1970s the organization has had little presence in Northern Ireland.

Ms. Williams, who was criticized for not donating all of her share of the Nobel Prize money to the cause, left the Peace People in 1980 and emigrated to the United States, settling in Florida. She returned to live in the Republic of Ireland in 2004.

Like Ms. Corrigan, Ms. Williams used her profile as a Nobel laureate to campaign on international issues, including children’s welfare and global peace. She lectured widely in the United States.

Relations with Ms. Corrigan, which had become strained as the Peace People flagged, were mended after Ms. Williams’s return to Ireland. In 2006, they joined four other female Nobel laureates to found the Nobel Women’s Initiative, promoting peace, women’s rights and other causes. After a visit to Iraq that same year, Ms. Williams caused controversy when she told a children’s seminar in Australia that she didn’t believe that she was nonviolent.

“Right now, I would love to kill George Bush,” she said, referring to President George W. Bush. “I don’t know how I ever got a Nobel Peace Prize, because when I see children die, the anger in me is just beyond belief. It’s our duty as human beings, whatever age we are, to become the protectors of human life.”

After Ms. Williams’s death, Ms. Corrigan put out a statement of condolence on the Peace People website, saying in part, “Betty was a woman of great courage with a passion for peace and a love and compassion for all children.”

Ms. Williams often attributed her religious tolerance and her role as a community activist to her mixed Protestant-Catholic heritage.

Elizabeth Smyth was born on May 22, 1943, in Belfast. Her father, a Protestant, was a butcher; her mother, a Roman Catholic, was a homemaker. The family lived in the mainly Catholic West Belfast section.

In 1961 she married Ralph Williams, a Protestant marine engineer, with whom she had two children, Paul and Deborah. The marriage ended in divorce. She later married James T. Perkins, an educator, with whom she moved to Florida in 1982.

Information on survivors was not immediately available.

President Michael D. Higgins of Ireland paid tribute to Ms. Williams after her death, saying that her fight for peace carried “a commitment she brought with her to the end.”

There were no such public declarations, however, after Ms. Williams and Ms. Corrigan returned to Belfast, and the Troubles, from the Nobel ceremony, greeted by what was said to be a disappointing crowd of only about 2,500 people. Not a single member of the city’s 52‐member council attended the rally.

As The New York Times reported at the time, “It was a bittersweet welcome home for the women whose work among Protestants and Catholics in Northern Ireland won them the 1976 prize.”

The dispatch continued: “For a while there were kisses and hugs as the two women walked Belfast’s main street. But there was no civic reception organized for them, and they even had to submit to searches at security barriers in the street.”