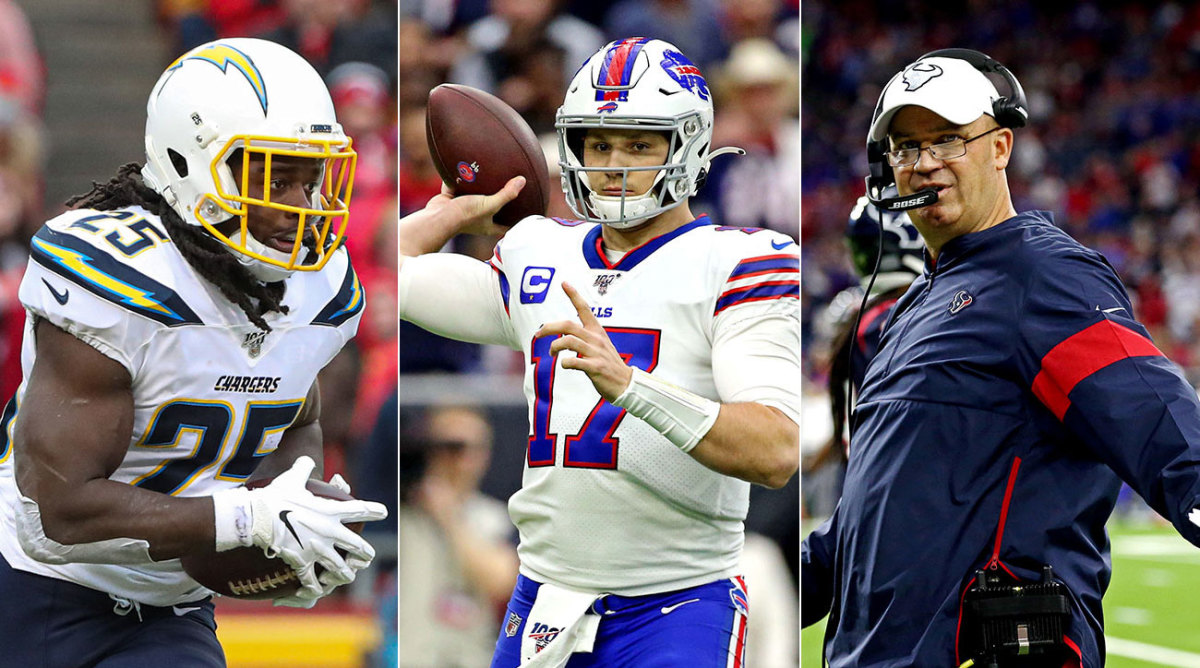 The first wave of free agency has ended and we have some thoughts. Most of the signings will not matter to us in two or three years, but that doesn’t mean consequential actions were not taken over the last week or so.

That’s mostly what we’re here to look at. When considering the big picture at play, who and what actually won Wave One of free agency? Who lost?

Whether it was the idea that there would be a mad chase for Tom Brady, that Brady would become a flytrap for high-profile free agents or that this was purely a football move, this was a good spring for smoke and mirrors. This is not meant to criticize the reporters who have passed along this information; I legitimately believe that important people in the league thought this, or wanted us to think this. We live in a world where nothing is completely what it seems. Are tax cuts actually tax cuts or do we just call them tax cuts? But I think we would all benefit from a slice of the truth. There did not seem to be a robust market for Tom Brady. The perpetually irrelevant Buccaneers will benefit wildly from this signing, win or lose, because they are going to charge you more for season tickets and hats and shirts and jerseys. If Antonio Brown, Josh Gordon and Devonta Freeman flock to Tampa Bay in order to play with Tom Brady, that is not the formulation of a super team. That is a few names that we recognize without opportunities elsewhere hoping to save their careers.

Quarterbacks who may have appeared on Jon Gruden’s QB Camp

Chances are, if you have become available as a passer over the last three years and were once seated opposite Jon Gruden for his ESPN QB camp series, you are now on the Raiders’ depth chart which, at the moment, looks like this:

Gruden is hoarding remember-that-guy quarterbacks like they’re commemorative stamps, but we bring this up not to bash the Raiders’ head coach but to pay him a compliment. Throughout the winter it seemed Las Vegas was lukewarm on Derek Carr at best, despite him displaying traits of a top 10 passer. There was a legitimate belief around the league that Gruden would make a play for Tom Brady. Remembering, too, that veteran quarterbacks with a track record of success are Gruden catnip, it’s a bit remarkable that he opted to stick with the smart (and relatively affordable!) option behind center instead of the flashy one.

Foles has been bit Forrest Gump-ian throughout his career, as he’s stumbled upon some of the better offensive flashpoints in recent history (and also played for Jeff Fisher). Being traded to Chicago assures that the legend continues to grow. He is, by all accounts, a good person and quarterback with a feel for locker rooms. He’s also walking into a familiar offensive situation. He is a slight upgrade over Mitch Trubisky and can both give Trubisky a run for his money during training camp and adequately enter a game should Trubisky struggle. Foles has had a pretty incredible career to this point.

I think the fact that Belichick was able to reportedly stick to a price range and finally run the quarterback position as economically as he does the rest of his roster was a true testament to the power he’s cultivated in Foxborough. This is not to suggest that he’s happy Brady is gone—I think both parties will probably realize what they miss about one another during the season—but it was likely getting more difficult for Belichick to run the operation the way he saw fit with a quarterback desiring a larger portion of the cap and demanding a better weapon set. Reading about and observing Belichick over the years, 2020 seems like the kind of stimulating challenge he was bred for. The chance to remake the offense as he sees fit has to be enticing.

This was a weird spring for quarterbacks, but the moment the new CBA was ratified, Tannehill was signed to a four-year contract that puts him within striking distance of some of the highest paid quarterbacks in football. Derrick Henry is also back on the franchise tag. If nothing else, Tannehill was able to reclaim his career after a mercurial start in Miami and find an offense that suits his strengths. The speed at which he resigned in Tennessee also gives the impression that there was not much heat from Brady.

I was wrong in assuming that the Chargers were going to spend themselves into a black hole this spring, given the pressures associated with moving into a new stadium with zero fan base. This is a tremendous show of faith in both head coach Anthony Lynn and general manager Tom Telesco. There is a good chance the Chargers unveil their team with Tyrod Taylor under center and a relatively anonymous set of offensive playmakers. Their additions in free agency—Bryan Bulaga, Linval Joseph and Chris Harris—have all been financially reasonable with a tremendous upside. It would not be surprising to see the Chargers back in the playoff conversation much sooner than we initially thought.

This is part of a two-sided point, but Allen now has a legitimate No. 1 playmaker on offense—Stefon Diggs—at which to direct his cannon. Last year was a victory for scheme design in Buffalo, which allowed Allen to take a statistical leap forward. Just take a look at his 2018 and 2019 ratios in intended air yards per pass and actual air yards. This past year, the offense broke in a way that allowed him to find the target with a much higher upside without the risk. The completion percentage goes up, the interceptions go down and the quarterback rating rises to “OK we can win with this.”

I know I cannot articulate this any better than colleague Jenny Vrentas, who led our podcast with a pinpoint takedown of the league’s decision to barrel ahead with free agency (it also made for an excellent column). There’s a lot of truly horrific stuff happening in the world right now, so forging ahead with your intended programming and scooping up quarantined eyeballs is going to look less evil by comparison. Perhaps that is all the league was aiming for. But many coaches, agents and general managers have voiced legitimate concerns about the mechanics of free agency during the COVID-19 pandemic, not to mention the optics of football players cashing fistfuls of money at a time when an emergency stimulus is needed just to help people survive the rigors of a massive health crisis. I think in 20 years when people look back at this moment, we will divide the response between those who could do something about it and did, and those who considered the economics before taking a plunge.

What a brutal statistic from ESPN Stats and Info on Friday: 22 running backs were selected in the 2015 draft. Now that Todd Gurley is in Atlanta, none of them remain on the same team. The Ezekiel Elliott deal is about half a season away from also looking like a major sunken cost. The running back resurgence is dead and teams looking for a competitive advantage will continue to find ways to squeeze one of the most replaceable positions in the league. It’s crazy to think about where we were two years ago when the Rams and Gurley agreed to their record extension. This was finally a vehicle for running backs to be paid like the versatile playmakers they are. Now, the market will likely recoil as the positional bubble pops.

Players with an injury history

Another group adversely affected by starting free agency on time: players with a serious medical issue or a past history of medical issues, who are being shut out of the process. Jadeveon Clowney is still unsigned. Cam Newton may have to wait until after the draft to find a team. And that doesn’t take into account the dozens of other players who may have medical issues that teams want to check out personally who could use a game check more than Clowney or Newton. The haphazard nature by which this was launched is startling given how many sane plans were later floated on social media that could have been cemented by the league after a long meeting or two.

O’Brien logged one of the worst trades in recent NFL history this past week, dealing DeAndre Hopkins to the Cardinals for David Johnson and a handful of non-first-round picks. His potential reasons for doing so, while downplayed by Hopkins, were also possibly aired by Michael Irvin. This was made worse by the fact that the Vikings got a better return for Stefon Diggs.

Fellow Belichick understudy Matt Patricia also struggled this week, getting crushed by Darius Slay on Slay’s way out of town (Slay was not the only one who decided to speak up either).

It is moments like these where I’m amazed that people continue to talk about the creation of a culture without any idea what that means. There are coaches who can go places and create a winning atmosphere out of the existing talent (i.e. good coaches). Then there are coaches who go places and gut the roster, acquiring people who are just like them.

Maybe in a normal offseason, Winston achieves a soft landing. A team interested in his upside could take a flier and spend the spring and summer seeing if the raw talent was salvageable. That isn’t happening right now. As of this column’s publishing, Winston is still available in free agency while his former team has pivoted into the full-time Tom Brady experience. While his current predicament is largely his own doing, Winston has gone through the offensive coordinator car wash that has negatively affected quarterback after quarterback in the NFL (though if Bruce Arians cannot fix him, there may not be a ton of faith that other coaches can do so in a condensed time frame).

Here’s the other side of the coin for Allen, listed as both a winner and loser. Should he flounder this season, it may be an indication that his time is coming to an end in Buffalo. I know that sounds drastic, but coaches are becoming less and less patient with draft picks. The stigma associated with moving on from high draft choices has largely dissipated thanks to the Cardinals and Josh Rosen. Allen now has a legitimately good coordinator and legitimately good surrounding pieces. The leap from year two to year three must be more significant than year one to year two.

Another downside to the Diggs trade: Are we sure it is a good idea to pair Diggs, a receiver who has been vocal about his target share in the past, with a quarterback who has the fifth-worst completion percentage above expectation rating? Could anything go wrong there?