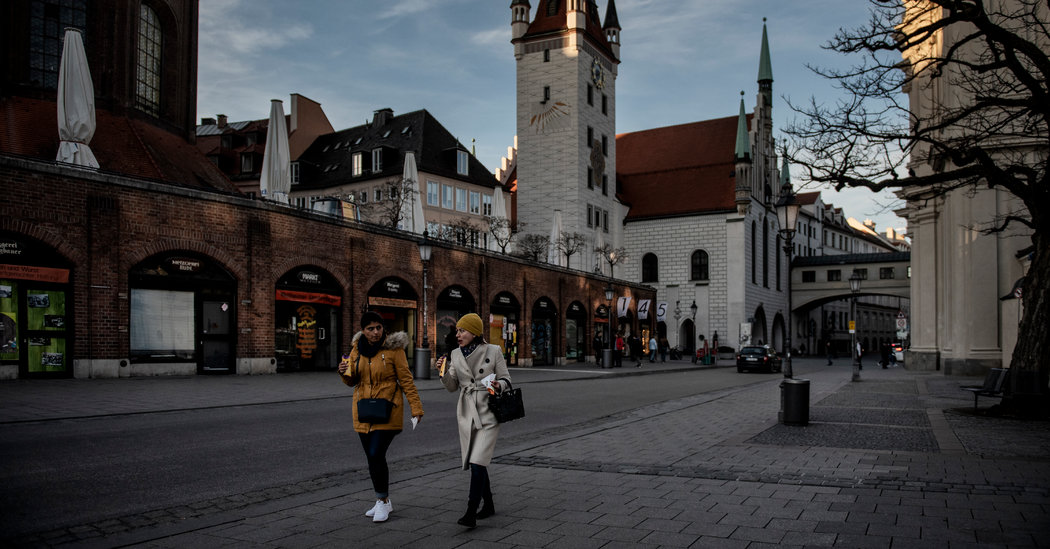 Don’t worry about government deficits so much and start spending. Get ready to use the “big bazooka” by issuing eurobonds. Drop cash from the sky.

As Europe’s policymakers race to prop up the economy while the coronavirus rips through the continent, everything is on the table.

“Extraordinary times require extraordinary action,” Christine Lagarde, the president of the European Central Bank, said on Twitter as she announced plans this week to overwhelm debt markets with cash to keep the borrowing costs of countries like Italy from spinning out of control.

“There are no limits to our commitment to the euro,” she said.

But was the dramatic announcement enough?

“The E.C.B.’s action yesterday was important,” but it may not be sufficient if the eurozone is facing perhaps a 10 percent drop in growth, said Mujtaba Rahman, who leads the Europe practice at the Eurasia Group, a consulting firm.

“European Union leaders are not off the hook and will need to keep thinking creatively about collective measures they can take to help member states,” he added.

The 27 countries in the European Union have collectively deployed more than 200 billion euros (about $219 billion) to finance a raft of measures, like cutting taxes and extending unemployment benefits. That figure already seems set to grow.

The European Union has identified more than €70 billion in funding that it can quickly funnel to countries and companies that urgently need it. And the European Central Bank’s €750 billion bond-buying program will make it easier for even the worst-hit countries to borrow money.

But as the pandemic accelerates through the continent, sending weakened economies toward recession, European policymakers still have some additional tools they can deploy.

To be helpful, the European Union and its institutions must first stop being unhelpful. This will mean waiving rules meant to ensure that countries don’t overspend and that governments don’t unfairly assist companies.

Stringent fiscal rules that set caps on the size of deficits European Union countries are allowed to run (3 percent of their annual economic output) will soon be out the window.

Those rules have often been loosely carried out, but in the case of countries, like Greece, that suffered the worst of the eurozone crisis of the 2010s, their application led to deep cuts in spending that intensified downward economic spirals.

That would allow countries to run up deficits in excess of 3 percent and throw money at the fight against the virus and its financial toll.

Another set of rules that are about to be bent prohibit state aid to companies. For decades, European governments lavishly subsidized money-losing companies, like utilities and airlines.

The practice was phased out in a bid to create fair competition and let private companies into markets to help drive down prices.

But in the time of the coronavirus, state aid could make a comeback, and the European Commission is looking at ways to permit it. France has announced that it’s closely watching strategic industries for bailouts or even nationalizations — a word that has been anathema in contemporary European economic orthodoxy.

When it comes to financial disasters, military nomenclature is preferred by European economic policymakers.

“The big bazooka” was a catchy phrase used to describe some crucial measures that officials were prepared to take to curb the destructive nature of the eurozone crisis.

The term is very much on the table again, as some European officials are considering something unprecedented: issuing debt together to help fill gaping holes in countries’ budgets as they spend billions responding to the pandemic.

The idea of issuing so-called eurobonds — debt backed by all members of the bloc — was considered, and rejected, during the financial crisis as a way to help Italy with its enormous debt. Germany, the Netherlands and other countries opposed the idea, which they viewed as a way of shifting their wealth to a country with a history of irresponsible spending.

These days, Italy still has huge deficits and debt loads, but now it is also the European country hit hardest by the coronavirus.

Fear that Italy could provoke a financial crisis has revived talk of giving the European Union much broader powers to issue bonds that Rome (and others) could use to pay for health care and to stimulate its economy without making its government debt of €2.4 trillion even bigger.

Only now they’d be called “corona bonds,” in a marketing trick to allay fears that this is a repeat of the eurozone crisis.

And with Italy engulfed by a tragedy not of its own making, attitudes may change.

“This is not the time to look at the past and what Italy did wrong,” said Zsolt Darvas, a senior fellow at Bruegel, a research organization in Brussels. “If Italy goes bankrupt, the economic shock in the rest of Europe will be several factors larger” than the eurozone debt crisis that began in 2010, he said.

The European Stability Mechanism, a conservative but well-endowed fund that’s able to raise €410 billion on behalf of eurozone countries, could issue and guarantee these bonds. The European Investment Bank and the European Commission could, too.

In 1969, the Nobel-prize-winning economist Milton Friedman suggested half-whimsically that, in a severe crisis, central banks could print money and drop it from helicopters onto a grateful populace.

Now, amid serious talk in the United States of handing out cash gifts to help people get through the lockdowns, the idea is gaining supporters in Europe. After the European Central Bank announced plans to flood debt markets with €750 billion in cash, helicopter money would be about the only heavy weapon it had left.

True helicopter money would come not from the government but straight from central banks. They can create money that never needs to be paid back. A central bank giveaway would provide an immediate jolt to spending and confidence without creating a debt burden.

But there are several problems with helicopter money, and most economists still consider the idea far-fetched.

To begin with, giving away money equitably is not as easy as it sounds. Europe does not have a unified social security system that could be used as a conduit.

Helicopter money is also a blunt tool. It helps the rich as much as the needy and would not do much for businesses whose customers are staying home, like restaurants and hotels.

It makes more sense to funnel aid to the people and businesses that need it most, Mr. Darvas said. For example, the European Central Bank could issue cash to commercial banks with instructions that they write business loans due in 100 years — effectively a gift.

“You don’t need to give money to rich people,” Mr. Darvas said.