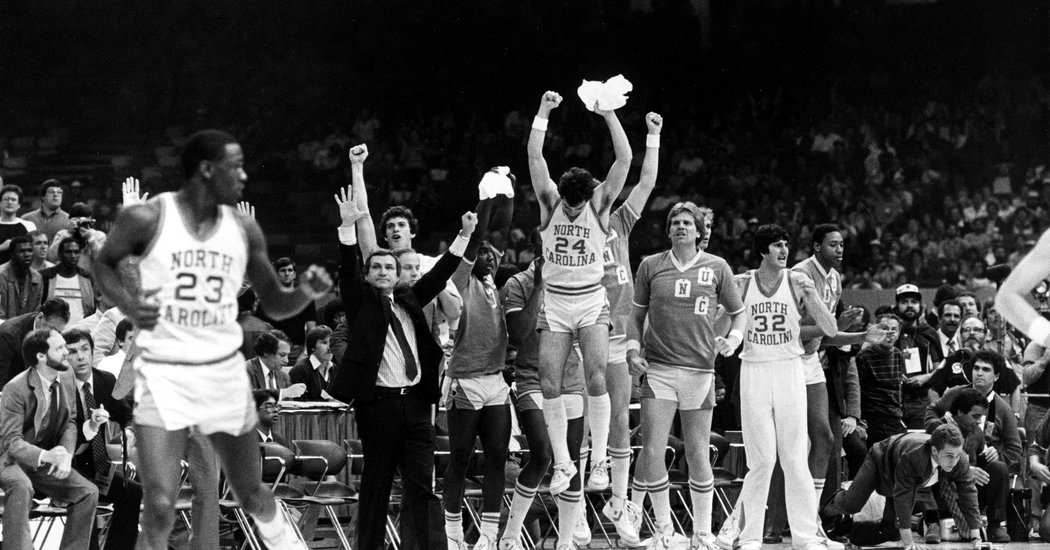 “I don’t know what to do with myself,” Dorothy Izzo said, according to her son. Her usual plans for March — watching college basketball — had collapsed.

We are all Dorothy Izzo.

The cancellations of the N.C.A.A.’s men’s and women’s basketball tournaments because of the coronavirus pandemic left millions of fans without the promise of hour after hour of live college basketball over the next several weeks. But a trove of games endures online, meaning a basketball fix is mere keystrokes away. This week, which was supposed to be the launch of both tournaments, we asked some of the most famous coaches in college basketball to tell us about their favorite March Madness games over the years.

Many of them confessed to feeling lost without the tournaments, even as they said they understood the N.C.A.A.’s decisions. But it had been decades, Tom Izzo said, since he had spent this time of year doing something besides preparing for games, coaching in them or watching from afar.

What he’d watch: 2012 national championship game between Kansas and Kentucky.

Why he’d watch it: Kentucky was far in front at halftime when Calipari heard his star freshman, Anthony Davis, make a startling announcement to his teammates.

“Look, I can’t make a shot,” Calipari remembered hearing from Davis, among the best players in the country that season, after he failed to hit a basket in the first half. “I’m done shooting.”

He’d play defense. He’d rebound. He wanted to do anything but take a shot.

“That moment kind of told me that wow, did we have something special,” Calipari said. But it took some late heroics for Kentucky to win it all as Kansas clawed its way back into contention — even on a night when Davis cobbled together 16 rebounds.

With 1:11 to play and Kentucky up by 6, Calipari called a timeout.

“I had to slow down the game earlier than I usually did to make sure we were going to get a great shot every time down,” he said. “They were making a run at us, and we didn’t want to give them momentum.”

The Kentucky staff had a hunch about what Kansas would do coming out of the timeout: a backdoor that would have Tyshawn Taylor challenging Michael Kidd-Gilchrist.

“Michael, they’re going run that backdoor to your side,” Calipari remembered saying. “Be aware. Be between your man and the basket.”

Taylor broke free, driving to the basket. Kidd-Gilchrist blocked his shot on the weak side, and Kansas turned the ball over seconds later. The sequence all but finished off the Jayhawks’ hopes.

“He came over and said: ‘I’m sorry, coach. I’m sorry, coach,’” Calipari said, recalling how Kidd-Gilchrist was upset with himself for allowing Taylor to get in position for a shot. “I said: ‘Are you crazy? You blocked it.’”

What he’d watch: Valparaiso vs. Mississippi in the 1998 tournament’s first round.

Why he’d watch it: Scott Drew was virtually certain he could see the future.

”I was 99.9 percent sure Ole Miss was going to win the game when they were shooting free throws with 4 seconds and were up 2,” said Drew, who was a Valparaiso assistant coach. Making matters worse, Ansu Sesay, the Southeastern Conference’s player of the year, was at the line.

Valparaiso was bound for another inauspicious end at the N.C.A.A. tournament. Two seasons earlier, Arizona had crushed Valpo in the first round. The Crusaders had played Boston College a little closer in the next year’s opening round but still lost.

Sesay missed both free throws, but Valparaiso got possession after the ball went out of bounds. Just 2.5 seconds remained in regulation when Valpo inbounded the ball, which quickly made its way to Bryce Drew, Scott Drew’s brother and a son of Homer Drew, the head coach.

Just seconds earlier, Bryce Drew had missed a 3-pointer that would have put the Crusaders in front. This time, he planted his feet, just for a moment and well behind the 3-point line, and launched a jumper in front of Valpo’s bench. It went in.

“It’s the only time ever in my life I’ve jumped on the pile,” Scott Drew said. “You got lost in the moment.”

What he’d watch: 1992 Elite Eight game between Duke and Kentucky.

Why he’d watch it: The last play was extraordinary: Duke trailed by a point with 2.1 seconds to go when Grant Hill inbounded the ball with a downcourt hurl to Christian Laettner.

Laettner, who was standing near the free-throw line and faced with two defenders, leapt to catch the pass, faked, dribbled and then twisted leftward for the jumper. Swish.

“You think about the pass, you think about the presence of mind to know the look and be able to take your time and lock in on it,” Grant said. “It was obviously something they had worked on and were prepared for, and the ability to execute under those circumstances is pretty impressive.”

But while the game is enshrined for Laettner’s shot, Grant and others noted how closely fought the game was in the lead-up to that dramatic moment.

“I just thought it was just a high-level competitive game,” Grant said. “You almost wished that both teams could win and advance. It was one of those games where you felt like there shouldn’t have been a winner and a loser.”

Why he’d watch it: The 1979 title showdown was appointment television, especially in the Midwest, for two reasons: Larry Bird and Magic Johnson.

The Boston Celtics had already drafted Bird, but he had put off his professional debut to play a final season at forward for Indiana State. Johnson was playing his last game for Michigan State before the Los Angeles Lakers selected him with the first pick of the 1979 draft.

Tens of millions of people were watching at home, and a young Tom Izzo, who had received a ticket from his former coach at Northern Michigan, was in the stands in Salt Lake City.

“It maybe wasn’t the greatest game, but it was two of the biggest stars that would lead their teams to something special,” Izzo said. “You think of Bird and Magic, and how does it get any better?”

And the game, in which Johnson soared and Bird was more contained than usual, was an indelible memory for Izzo.

Michigan State had already downed Duke, a No. 1 seed in the tournament, and Izzo was left to coach against Tubby Smith, a friend.

Michigan State led as the clock ticked down in regulation when Patrick Sparks, a guard for Kentucky, took one last shot: a 3-point attempt. The ball bounced around the rim and fell in as the buzzer sounded. Tie game.

But cue a debate: Did Sparks have his toe on the 3-point line? A five-minute review commenced.

“That thing took as long and lasted as long because it was for so much: It was not only a controversial shot, but it was sending someone to the Final Four,” Izzo said.

The referees allowed the Kentucky shot to stand, sending the game to overtime, and then, eventually, another. Michigan State prevailed. How the Spartans won is a bit fuzzy in Izzo’s mind. But he can still see the shot by Sparks.

“I don’t remember any other plays in that game,” he said, “but I remember that one.”

What she’d watch: Not a game but the HBO documentary, “Women of Troy,” featuring Cheryl Miller and the great Southern California women’s teams that won N.C.A.A. women’s titles in 1983 and 1984.

Why she’d watch: The documentary captures the advent of women’s N.C.A.A. women’s basketball. The first men’s N.C.A.A. tournament was held in 1939, but the association did not sponsor a tournament for women until 1982, a full decade after the passage of Title IX, the federal law that prohibited discrimination based on gender. Until then, the women’s tournament had been facilitated by the Association for Intercollegiate Athletics for Women.

Miller, from Riverside, Calif., was perhaps the first superstar in women’s college basketball. This was an era long before the W.N.B.A., when CBS was obligated to put women’s basketball on television so it could secure the rights to air men’s basketball. But the women’s game featured seminal players like Mulkey, Nancy Lieberman and Ann Meyers. At U.S.C., Miller, along with twin teammates Pam and Paula McGee, and Cynthia Cooper, played with verve and flair that, according to The Los Angeles Times, “mirrored what the Showtime Lakers were doing across the city.”

“The more people can learn about the players who came before the players today, the better it is,” said Mulkey, who also won national titles as a player for Louisiana Tech in 1981 and 1982. (The first was in the A.I.A.W. tournament, and the second came in the inaugural N.C.A.A. women’s tournament.)

One of the most memorable moments of the documentary for Mulkey involved a heartbreaking, decisive play that she was involved in. Late in the 1983 N.C.A.A. championship game between U.S.C. and Louisiana Tech, Mulkey stole the ball, passed to a teammate, got it back and drove toward the basket, attempting to tie the score. But Cooper slid into position and Mulkey was whistled for charging with 9 seconds left. U.S.C. survived to win, 69-67.

Through the years, Mulkey and Cooper have joked about the play, with Mulkey asserting that it was a block and Cooper saying, no, it was definitely a charge.

“On the documentary, you can see Cheryl say that’s probably the only charge Cooper took in her career,” Mulkey said with a chuckle.

Why he’d watch it: “I used to be the most superstitious coach in the world,” Williams said on Thursday morning. “I tried every superstition this year, and I got my tail kicked every time.”

But one of his tricks in 1982 was to eat a candy bar, usually a Snickers, before games. As tipoff approached in the Superdome in New Orleans, where the Tar Heels arrived with just two losses on the season, Williams went in search of his Snickers. He couldn’t find a concession stand with one and persuaded a security guard to let him run to a nearby store.

Of course, the guard had vanished when Williams, an assistant to Dean Smith, returned. Finally allowed back in, Williams recalled, “That was the first time I felt like I had done anything” for a team that included a freshman named Michael Jordan, but also Sam Perkins and James Worthy.

The game proved extraordinary. By the time Smith called a timeout with 32 seconds to play and Georgetown up by 1, the lead had changed 15 times and Williams’s season-long belief — that North Carolina had the best team in the country — was in peril. The team seemed shaken, too.

“We kneel down in the front of them, and Coach Smith said: ‘This is great. It’s our ball, so we’re going to determine who is going to win the national championship,’” Williams said. “When Coach Smith first started talking and saying we’re in great shape — I always believed everything the man said, but I sneaked a peek at the scoreboard because I thought we were down 1.”

Smith ran through a few basketball items — what they would run to inbound the ball, how he didn’t think Georgetown would be pressing, the backup plan in case a lob failed — and the session broke up.

To Williams, the mood had improved. As Jordan headed back toward the court, Williams said, Smith offered him an admonition: “If you get it, Michael, knock it in.”

U.N.C. passed the ball around for 17 seconds as Patrick Ewing, Georgetown’s center, hung around, ready to block. The ball reached Jordan, who launched into a jumper.