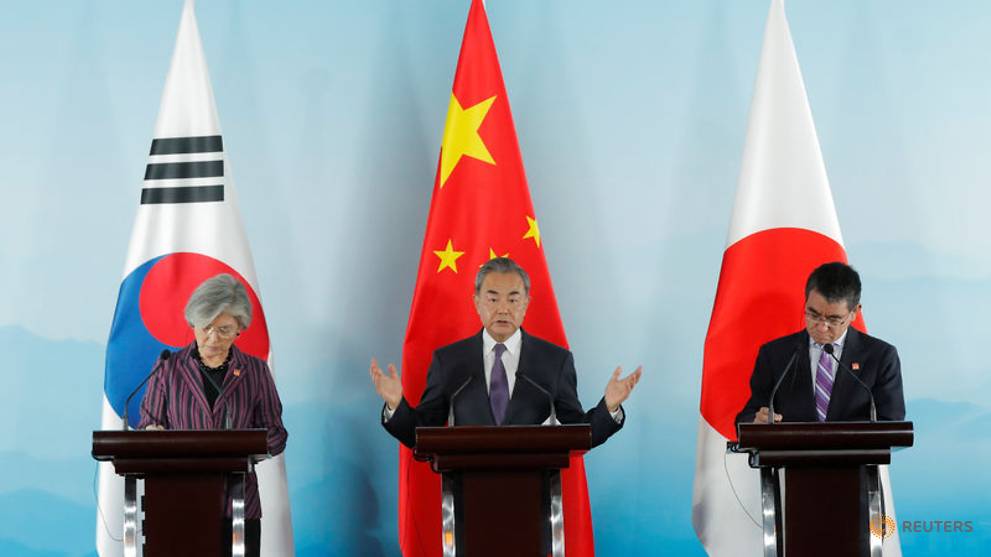 SEOUL: The foreign ministers of South Korea, China and Japan will hold a video conference on Friday (Mar 20) to discuss cooperation on the COVID-19 pandemic, Seoul’s foreign ministry said, amid growing concerns about a global spread and imported cases.

The ministers are expected to share information on the outbreaks in their countries and discuss ways to prevent the further spread of the virus while maintaining economic and people-to-people exchanges.

Historical and territorial tensions between the three countries have often overshadowed their diplomatic and economic cooperation.

Earlier this month, South Korea suspended visas and visa waivers for Japan in a tit-for-tat move to Tokyo’s own travel restrictions on Koreans, as fears over the coronavirus rekindled a feud between the neighbours dating back to before World War Two.

Chinese President Xi Jinping said China is prepared to “work with all other countries” to intensify the global fight against the deadly coronavirus pandemic, state media on Friday reported.

Both China, where COVID-19 first emerged, and South Korea, which suffered Asia’s biggest outbreak outside China, have seen a downward trend in locally transmitted transmissions but are grappling with a rising number of imported cases.

Mainland China reported zero locally transmitted cases of the coronavirus for the second straight day, while the daily tally for infections involving travellers arriving in the country rose to a new high, authorities announced on Friday.

China had 39 new confirmed cases on Thursday, the country’s National Health Commission said, all of which were imported cases.

The daily tally for new infections has been trending downward over the past week, despite a slight uptick on Thursday as small-scale outbreaks continued to emerge across the country.

Of the new cases, 34 were from the hardest-hit city of Daegu where dozens of patients at several nursing homes have tested positive for the virus this week, the KCDC data showed.