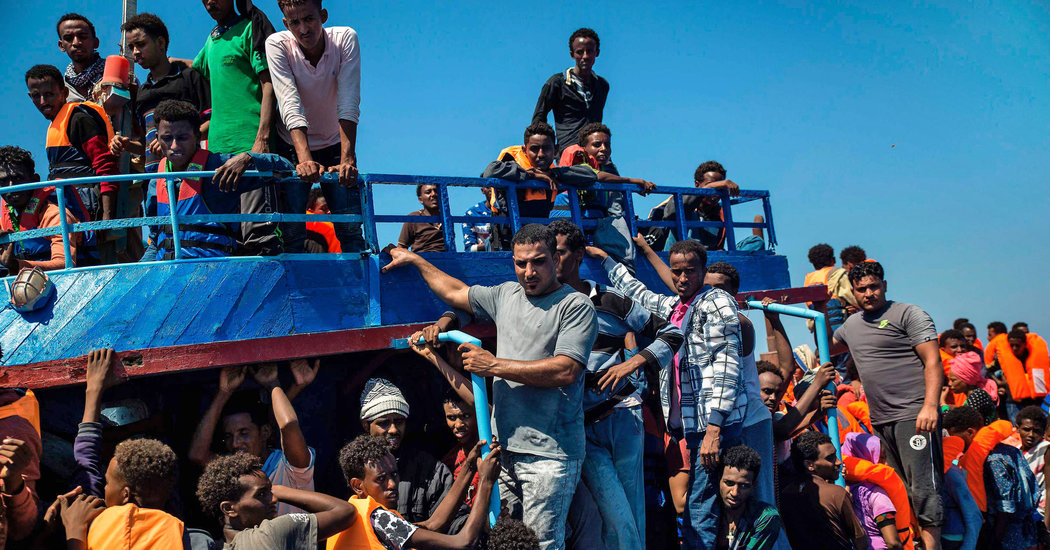 HAMBURG, Germany — The Panther, a German-owned merchant ship, is not in the business of sea rescues. But one day a few months ago the Libyan Coast Guard ordered it to divert course, rescue 68 migrants in distress in the Mediterranean and return them to Libya, which is embroiled in civil war.

The request, which the Panther was required to honor, was at least the third time that day, Jan. 11, that the Libyans had called on a merchant ship to assist migrants.

The Libyans could easily have alerted a nearby rescue ship run by a Spanish charity. The reason they did not goes to the core of how the European authorities have found a new way to thwart desperate African migrants trying to reach their shores from across the Mediterranean.

And some maritime lawyers think the new tactic is unlawful.

Humanitarian rescue ships, on the other hand, take the migrants to Europe, citing international refugee law, which forbids returning refugees to danger.

After the Panther arrived in Tripoli, Libyan soldiers boarded, forced the migrants ashore at gunpoint, and drove them to a detention camp in the besieged Libyan capital.

“We call them privatized pushbacks,” said Charles Heller, the director of Forensic Oceanography, a research group that investigates migrant rights abuses in the Mediterranean. “They occur when merchant ships are used to rescue and bring back migrants to a country in which their lives are at risk — such as Libya.”

The coronavirus crisis has made arguments about Mediterranean migration policy seem peripheral to the European moment, as governments focus on restricting not just external migration, but also the internal movement of their own citizens.

But long before the pandemic hit, European leaders were mainly consumed by preventing Mediterranean migration, hoping to avoid a repeat of the 2015 migration crisis. And that approach remains topical, with hundreds of migrants crossing the Mediterranean already this week, either oblivious to or unconcerned by the coronavirus outbreak.

Since the 2015 crisis, European governments have frequently stopped the nongovernmental rescue organizations that patrol the southern Mediterranean — like the Spanish ship, Open Arms — from taking rescued migrants to European ports.

European navies and coast guards have also largely withdrawn from the area, placing the Libyan Coast Guard in charge of search-and-rescue.

Now Europe has a new proxy: privately-owned commercial ships. And their deployment is contested by migrant rights watchdogs.

Although a 1979 international convention on search and rescue requires merchant ships to obey orders from a country’s Coast Guard forces, the agreement also does not permit those forces to pick and choose who helps during emergencies, as Libya’s did.

“That’s a blatantly illegal policy,” said Dr. Itamar Mann, an expert on maritime law at the University of Haifa in Israel.

But commercial shipowners say that after saving migrants from drowning, their legal duty is to do as they are told by the Libyan Coast Guard, as decreed by a separate convention on search-and-rescue signed in 1979.

“This is in accordance with international law,” said John Stawpert, a representative for the International Chamber of Shipping, a global shipowners’ association.

Between 2011 and 2018, only one commercial ship returned migrants to Libya, according to research by Forensic Oceanography.

Since 2018 there have been about 30 such returns, involving roughly 1,800 migrants, in which merchant ships have either returned migrants to Libyan ports or transferred them to Libyan Coast Guard vessels, according to data collated by The New York Times and Forensic Oceanography.

The real number is likely to be higher.

During the height of the crisis, ships like the Panther would have transferred rescued migrants to the Italian Coast Guard or humanitarian organizations.

But in 2017, Italy gradually relinquished responsibility for search-and-rescue coordination in the southern Mediterranean to the Libyan Coast Guard, neatly absolving Italy of the legal obligation to rescue and admit every migrant entering international waters north of Libya.

The next year, merchant ship crews began to return migrants to the Libyan authorities, which had been persuaded to take on the role by the promise of more equipment and international legitimacy.

“All the ships who work in search-and-rescue have to follow this code of conduct,” Commodore Masoud Abdal Samad, the Libyan Coast Guard commander, said by telephone.

Consequently, only the Panther was considered an “acceptable” rescue vessel on Jan. 11, he added.

The pattern of using commercial ships has increased in recent months, said Anabel Montes Mier, the head of mission aboard the Open Arms that day.

“These commercial ships follow the orders,” Ms. Montes Mier said. “We refuse to return people to places that are unsafe.”

The number of people reaching Italy has dropped by more than 90 percent since 2017, while the death-toll in the southern Mediterranean has roughly halved in the same period.

But the number of people drowning, as a proportion of those trying to cross, has sharply risen — from roughly 1 in 50 in 2017, to 1 in 20 in 2019, according to data compiled by the International Organization for Migration.

The forcible return of the migrants, a practice known as refoulement, has also put many of them in lethal danger on land, because of Libya’s civil war.

In February, an airstrike hit the dock used by the Panther to disembark migrants in Tripoli. Once ashore, migrants are imprisoned in detention camps run by an assortment of militias. Often, these lie in areas under attack. Last July, one camp was bombed, killing 53 prisoners.

In a lawless land that provides few rights to foreign laborers, migrants are often tortured, raped, held for ransom, or treated as modern-day slaves.

Steven, a 20-year-old from South Sudan, described being shot and beaten by Libyan officials after he was returned to Libya by a commercial ship in November 2018.

“Why did they rescue us and take us back to Libya?” said Steven, who asked to be identified only by his first name for fear of legal repercussions. “It was better to die in the ship.”

The question of culpability is complex.

Since 1951, international refugee law has stipulated that migrants should not be returned without due process to the countries they fled. But in cases involving merchant ships, migrants are often rescued in international waters, before reaching Europe’s maritime borders.

The authorities in Italy and European Union say they should therefore be returned to Libya, since Libya coordinates search-and-rescue operations in these international waters.

Critics argue that Italy and its European allies still bear responsibility. In the view of humanitarian monitoring groups, the Europeans never relinquished their role in orchestrating search-and-rescue missions — undermining the rationale for surrendering control to Libya.

During at least part of 2019, Italian navy officers aboard an Italian vessel docked in Tripoli’s harbor oversaw rescues on behalf of the Libyans, according to documents published during a court case in Sicily last March.

“They coordinated the rescue activities,” Matteo Salvini, Italy’s interior minister at the time, said in an interview with the Times.

In one instance in November 2018, logbooks show how Italian Coast Guard officers contacted a cargo ship, the Nivin, “on behalf of” their Libyan counterparts. But the logs also reveal that the Nivin’s captain could only reach the Libyan authorities by contacting the Italian Coast Guard.

And though European navies have withdrawn from the area, their planes still direct the Libyan Coast Guard to migrant vessels, recordings published by The Guardian show.

In March last year, one such military plane ordered a merchant vessel to return a boatload of rescued migrants to Tripoli, without any intervention from the Libyan Coast Guard, according to recordings reported in The Atavist, a digital magazine.

One of the most recent instances, he said, was the weekend in January when the Panther rescued 68 migrants from the southern Mediterranean.