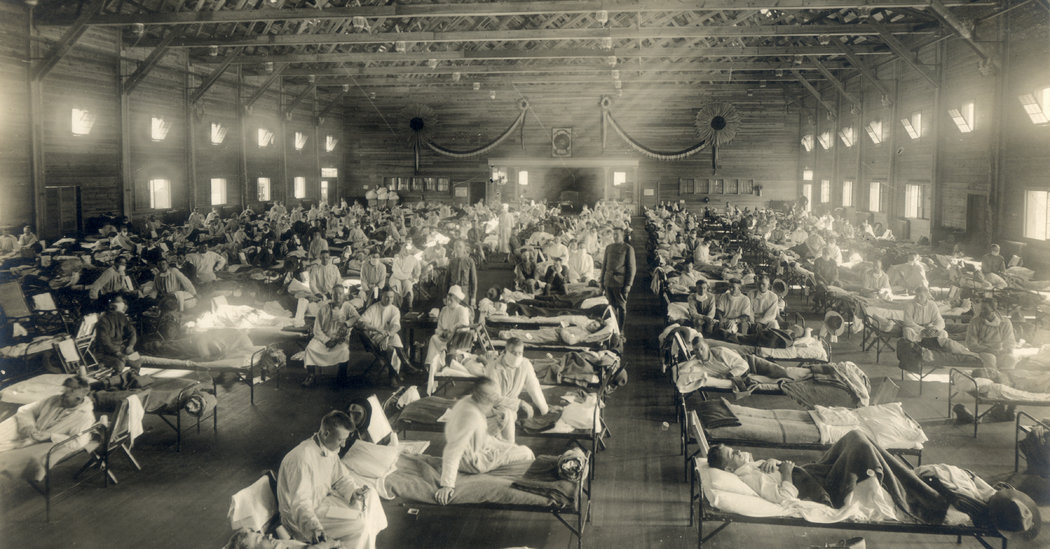 LONDON — There are times when the planet resets its course with a cruelty that seems as capricious as it is implacable. The coronavirus pandemic, spreading octopus tentacles into every crevice of society, is one of them, pitting the vanity of human assumptions against nature’s almost casual ability to destroy them. It is not the first time.

Calamities and the mass destruction of populations and lives stretch back to biblical times and on through the days of plague in medieval Europe. Wars, too, have brought a Darwinian pruning of entire societies. Technological advance, from siege engines to long bows, from gas chambers to weapons of mass destruction, has magnified the process, culminating in the Cold War’s calculations of mutually assured destruction.

But, as these photographs show — and as the pre-photographic chronicles of history, faith and mythology confirm — the Earth and its people have long been prey to the invisible pathogens that bring their victims low with equal efficiency.

In the annals of conflict, dating to the Plague of Athens from 430 to 426 BC during the Peloponnesian War, disease molded national fates as much as — sometimes more than — competing armies.

The fears from the latest pandemic are rooted deep in history. Plague in medieval Europe took millions of lives even at a time when globalization was in its infancy, slashing national and continental populations by staggering amounts in the mid-14th century.

Across millenniums, cholera, smallpox, typhus and other diseases have changed history’s course and reinforced human perceptions of frailty. The catalog ranges over swine flu and avian flu, leprosy, measles and malaria.

Reaching much further back, the sacred texts that define belief and identity to this day chronicled the ninth plague in the book of Exodus, which now seems to be a harbinger of the quarantine, self-isolation and social distancing that stretches ahead of many of us for months, if not years, to come.

“And total darkness covered all Egypt for three days,” it reads. “No one could see anyone else or leave his place for three days.”

Inevitably, this latest pandemic finds echoes in the near and ancient past.

The word pandemic derives from ancient Greek, meaning literally “all people,” but it does not apply universally.

Perhaps the most relevant antecedent to the current circumstance is the Spanish Flu, which spanned the globe between 1918 and 1919. It killed more people than those who died in World War I’s trenches and battlefields, where the malady in part germinated. The estimates run to in excess of 50 million fatalities.

Accounts link the spread of the disease to the trans-Atlantic deployments of American forces in the final days of World War I, and to the victorious return home of Allied forces after November 1918.

That pandemic managed to spread in an era even before the jet engine offered mass mobility. Since then, the world has become much more footloose.

Many surges in the rate of infection came from increases in human mobility, enabling people to carry pathogens with them in their pursuit variously of war and commerce.

Migration itself, for leisure, economic necessity or in flight of war, alternately unites the humanity even, or especially, in times of pandemic, while stirring fears real or exaggerated.

When President Donald Trump referred to the “Chinese Virus,” appealing to the xenophobia of those seeking a target of blame, some people recalled an image from 1968 during the so-called Hong Kong Flu that caused over 100,000 deaths in the United States, out of a global total in excess of one million.

The photograph showed a billboard with the words: “Hong Kong Flu is Un-American. Catch Something Made in the USA.”

Perhaps the most stubborn viral assault of modern times has come from H.I.V./AIDS, its early associations with homosexuality adding to the marginalization of victims and treatment.

The disease itself proved to be less discriminating than the societies it afflicted, becoming widespread. Yet even if it was once defined as a pandemic, it is now often depicted as a chronic or endemic condition, albeit of epidemic proportions.

By the end of 2018, according to the World Health Organization, 32 million people had died of H.I.V. since its recorded inception in the late 1960s, and 37.9 million people were living with the illness as a result of advances in treatment and care.

Covid-19 seems a long way from such hopeful assessments.

It belongs to “a large family of viruses which may cause illness in animals or humans,” called coronaviruses, according to the World Health Organization.

But those epidemics were far more limited in scope than the Covid-19 disease caused by the latest coronavirus.

In many ways, those earlier outbreaks of coronaviruses provided Asian countries, in particular, with a far more limited rehearsal for Covid-19, and the world with a warning of the potential for more widespread and more lethal contagions.

The same can be said of the swine flu outbreak of a decade ago, an H1N1 virus in the category of the Spanish flu that infected hundreds of millions worldwide, the young and otherwise healthy not excluded, but with a far less severe impact than that of previous pandemics.

Other diseases pointed to the potential for pandemic, too, even if more geographically contained and falling short of the scientific definition.

The murderous explosion of the Ebola virus that swept through parts of West Africa between 2014 and 2016 killed 11,300 people, according to the World Health Organization. It is referred to by specialists only as an outbreak or epidemic, even if it did cross frontiers between Guinea, Liberia and Sierra Leone.

The Ebola outbreak also showed that, for Europe and the United States, possessed of a sense of entitlement and prosperity, much of Africa remained remote, or even in the realms of the imagination, defined in the writings of Conrad and Naipaul.

For many, so did the prospect of more widespread disease. Covid-19, however, is emerging as the great leveler.

Ebola did not upend Western lives. It did not shutter theaters and bars from Los Angeles to Rome, or halt flights across the Atlantic, or close businesses and subways and schools, or leave many Americans and Europeans suddenly aware of their fragility and vulnerability to changed rules of mortality.

It did not lead inexorably to the conclusion that, henceforth, the assumptions and expectations of what constitutes Western normalcy would longer apply.

By now, no region has proved itself immune to penetration from disease, to its terrible persistence, or to the potential to become the source of pandemics, despite the temptation to assign blame, as with the Covid-19 contagion.

For instance, MERS, which claimed some 858 lives from 2,494 reported infections, mainly in 2012, and mainly in the Arabian Peninsula, according to the World Health Organization.

The outbreak then reoccurred in South Korea three years later. This time a coronavirus has gone global, nearly everywhere at once.

“We have never before seen a pandemic sparked by a coronavirus,” Tedros Adhanom Ghebreyesus, the director-general of the World Health Organization, said of Covid-19 on March 11. “This is the first pandemic caused by a coronavirus.”

“And we have never before seen a pandemic that can be controlled, at the same time,” he added.

Covid-19, then, presents a new threat to globalization, challenging humanity to come together or pull apart.

Globalization may have bound humanity in uneven chains of trade and profit, but it did not dissolve the primal fear of uncontrolled pestilence that has burrowed into human consciousness over millenniums.

The alarms and lockdowns over coronavirus have reversed the West’s perceptions of its own place in history. China is now offering aid to Italy. After decades of dismantling the barriers between them, European nations are rebuilding them, retreating to national sovereignty.

Across Europe, which once prized free movement, frontier posts and checks are being re-established. Yet, as Ian Goldin, a professor at Oxford University, noted in an Op-Ed article in The New York Times, those efforts may be just our latest vanity.

“No wall is high enough to keep out the threats to our future,” he wrote, “even for the mightiest countries.”