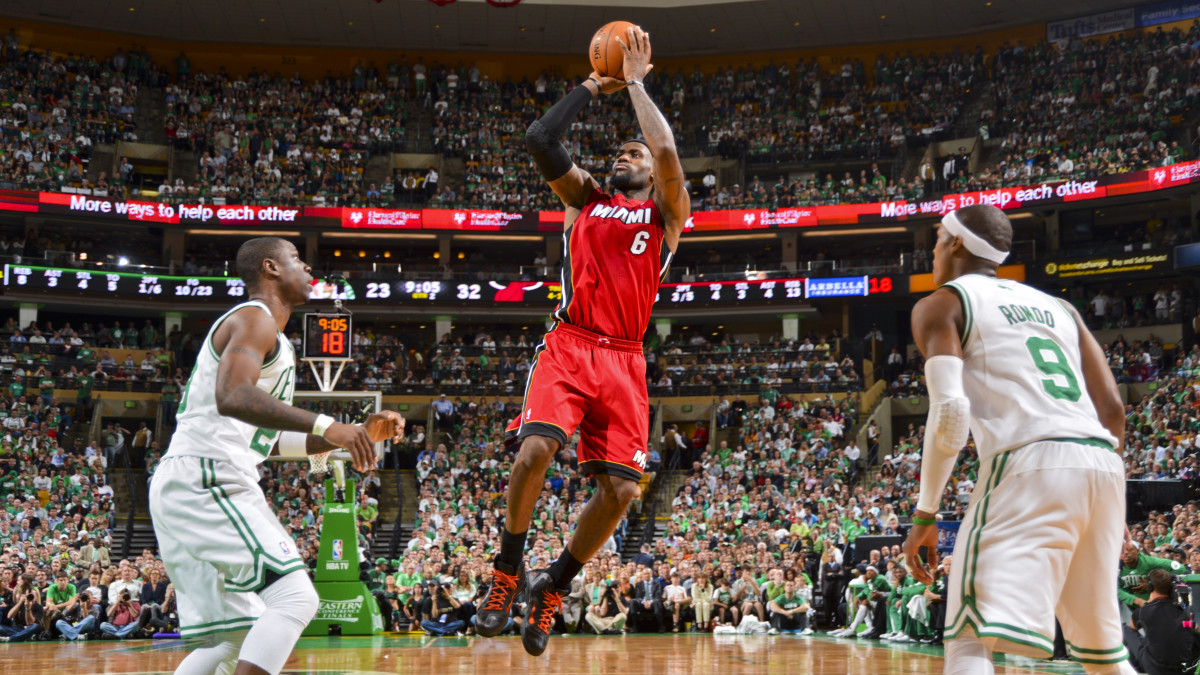 Behind the scenes of an all-time great LeBron game

With California governor Gavin Newsom issuing a statewide stay-at-home order, LeBron James needed some way to pass the time. So he hopped on Instagram Live and ’90s TV shows, sneakers and the new album from The Weeknd.

When the person running SportsCenter’s Instagram account brought up LeBron’s legendary 2012 Eastern Conference Finals Game 6 performance against the Celtics, he gave an interesting bit of insight into how he approached the game.

“My mentality was like, if we lose, Pat Riley may break us all up,” LeBron said. “And I don’t want that. It may be the quickest breakup in basketball history. And not only might they break it all up, my legacy is going to take a huge, huge hit if I don’t go out here and perform at an all-time high. Win, lose or draw, I had to be focused, I had to be locked in and lead us to victory. I didn’t know if it was going to happen that way but that was my mindset.”

James went out and scored 45 points on 19-of-26 shooting, with 15 rebounds and five assists to force a Game 7. The only mistake he made was wearing a goatee.

Our perception of LeBron has changed so much in the eight years since that game. Before winning that series against the Celtics and breezing past the Kevin Durant-Russell Westbrook-James Harden Thunder in the Finals, LeBron had been dogged by a reputation that he couldn’t win big games. His failures in Cleveland could always be explained away by his lack of a supporting cast (Mo Williams was his top sidekick his last two years there!) but that excuse went out the window when he teamed up with Dwyane Wade and Chris Bosh in Miami. They were the first modern superteam and doubters relished their failure in the 2011 Finals against the Mavs. The 2012 playoffs were an opportunity for LeBron to assert his greatness and dispel the notion that he was a choker.

Scoring 45 points in a playoff game was nothing new for LeBron, though. He’d already done it five times before that game in Boston and he’s done it five times since, including the 51 he dropped in the infamous J.R. Smith blunder game.

I can’t wait to see him add to that playoff résumé with the Lakers.

Major League Fishing is America’s last sport standing. … This is what the NCAA tournament bracket would have looked like if the tournament didn’t get canceled. … Which NFL teams most need to draft a quarterback?

The Big3 is planning a tournament in April for players who will be quarantined in Los Angeles. … ESPN is airing seven hours of Tom Brady coverage on Sunday. … How golf courses are dealing with the coronavirus. … MLB has finally agreed to pay minor leaguers for a few weeks.

Todd Gurley’s response to getting cut under quarantine

Exactly what everybody needed

Cool to see lacrosse in Uganda

Basketball fans are losing their minds

GameStop is telling its employees to ignore any government orders to close stores. … There’s a new TV show where people get houses on the cheap because there were murders there.

The only way you could get me to go there

People have a lot of time on their hands these days