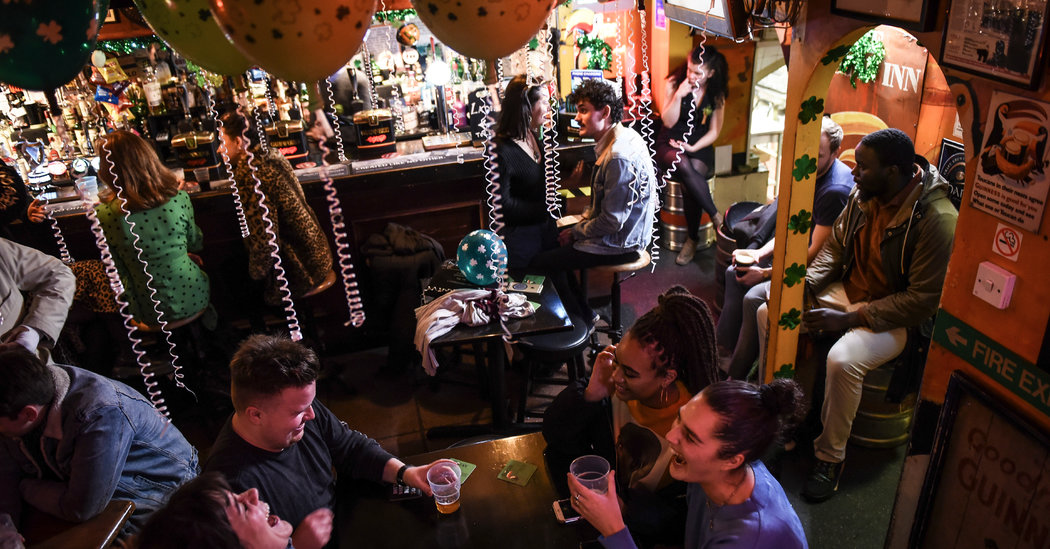 LONDON — For days, Prime Minister Boris Johnson charted a defiantly maverick course in Britain’s response to the coronavirus pandemic, refusing to shut down large parts of his country, as many other European leaders have.

On Friday, however, Mr. Johnson finally conceded, announcing that the government had ordered the shutdown of pubs, cafes, restaurants, clubs, gyms and theaters as of midnight in an increasingly anxious bid to curb the virus that has spread to more than 3,000 people.

Mr. Johnson’s reluctant action effectively brought Britain in line with France and other continental European nations, ending the country’s more relaxed but heavily criticized approach — one that showed how Brexit may encourage it to go its own way on public health and economic policy.

“People have already made a huge effort to comply,” a visibly chagrined Mr. Johnson said as he announced the shutdown at his daily news conference. “But we need now to push down further on that curve.”

The British government also rolled out another gargantuan economic rescue package, announcing that for the first time in history, it would pay as much as 80 percent of the wages of people — up to a total of 2,500 pounds, or $2,900 a month — who are unable to work because of the shutdown, but who are kept on company payrolls.

Taken together, Mr. Johnson’s measures go further toward a European-style welfare safety net than many of his European neighbors. It shows just how dramatically the pandemic has upended the plans of a government that swept into power only four months ago on the slogan, “Get Brexit Done.”

Nobody is talking about Britain’s departure from the European Union these days at 10 Downing Street, Mr. Johnson said this week — a blunt acknowledgment of how a global health emergency can sweep aside, almost overnight, an issue that had paralyzed domestic politics and divided the public for more than three years.

Yet Brexit has played a subtle role in Britain’s response to the pandemic, analysts say, and it will continue to do so. The go-it-alone instincts that drove Brexit also drove Mr. Johnson’s reluctance to embrace the more rigorous social isolation policies of France or parts of Germany. Brexiteers point to the government’s powerful rescue package as evidence of why being out of the European Union is good.

While Mr. Johnson attributed his decisions to scientific advice — and has changed course as the data has changed — he had proudly stood apart from President Emmanuel Macron of France and other European leaders, who appeared readier to curb civil liberties in the name of suppressing the virus.

The pound crashed to its lowest levels in decades against the dollar and the euro earlier this week — suggesting that in a crisis, Britain’s isolation looked like a source of vulnerability rather than strength.

“This is not a eurozone crisis,” said Holger Schmieding, chief economist at Berenberg Bank in London. “It’s a global crisis where the value of being big and having institutions that can act is, in itself, positive.”

The pound rebounded a bit on Friday as the chancellor of the Exchequer, Rishi Sunak, announced the wage compensation and other measures. “I am placing no limit on the amount of funding available,” Mr. Sunak declared. “We will pay grants to support as many jobs as necessary.”

Britain has used its independence to its advantage in some ways: by orchestrating a potent, coordinated fiscal and monetary rescue, something that has so far eluded countries on the Continent, which have relied on the European Central Bank to inject hundreds of billions of euros into the system.

For Brexiteers, that flexibility proves the advantages of being unshackled from Europe. But there are other areas where Britain’s departure raises questions. The European Union, for example, has organized a joint procurement system to speed up the purchase of ventilators, masks and other vital medical equipment.

Under the terms of Britain’s withdrawal agreement with Brussels, it remains part of the single market until the end of 2020. It is still paying billions of dollars into the European Union’s coffers, which means that it can take part in the procurement system, officials say.

But Mr. Johnson has not yet said whether Britain, which is desperately short of ventilators, will do so. In his daily briefings on the pandemic, Mr. Johnson promises that British companies will ramp up their production of gear. He rarely mentions Europe.

Asking the European Union for help would be politically tricky for Mr. Johnson. Some ardent Brexiteers and Conservative Party donors have been outspoken in playing down the risks of the coronavirus. Tim Martin, the chief executive of Wetherspoons, a large chain of pubs, said that closing the bars was “over the top” and that people had a greater chance of contracting the virus in supermarkets.

Anand Menon, a professor of European politics and foreign affairs at King’s College, London, said that the crisis had illustrated the downside of Mr. Johnson’s desire to stay aloof from all things European.

“Boris Johnson adopted an approach that was riskier than he needed to,” Mr. Menon said. Any stance that differentiates Britain from the E.U. is an “added bonus” for Brexiteers, he said, but “if we end up with a higher death rate than other countries it will look very bad for the government.”

The collapse of the pound underscores that. While Britain has never been part of the European Monetary Union, analysts said the currency benefited from the security of Britain’s close ties to the bloc. But now Britain’s weaknesses are laid bare, and investors see the dollar and euro as safer.

As always with Brexit, critics and defenders both find arguments for their side.

“In the economic area, there are things Britain is doing that are a template for Europe,” said Mujtaba Rahman, a former European Commission economist now at the Eurasia Group, a political risk consultancy, “On the epidemiology and the broader health crisis, going it alone doesn’t look so good.”