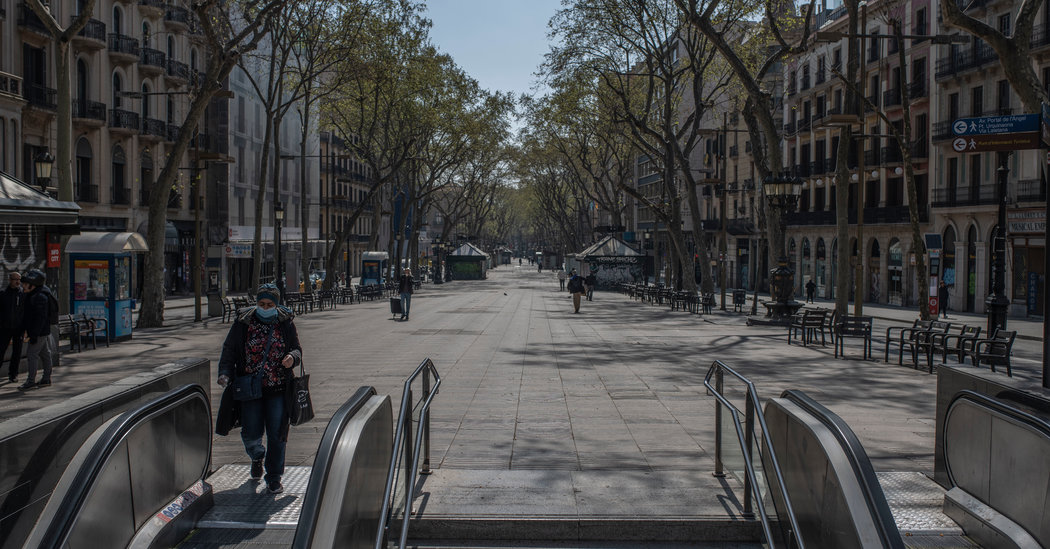 BARCELONA — Spain passed a grim milestone on Friday when it became the second European country to report over 1,000 coronavirus deaths, a mark that Italy passed a week ago, with the country’s doctors warning that the health system may soon be overwhelmed, just as in Italy.

Across Europe, where there have been well over 100,000 cases and nearly 6,000 deaths, nations are preparing in the face of the growing crisis — shoring up hospital resources and planning for an influx of new cases in the coming days.

Taking an emergency economic measure that would have been unimaginable just weeks ago, the European Commission on Friday announced that it had triggered the so-called “general escape clause,” a panic button that lifts stringent spending rules and allows countries to run big deficits to respond to a crisis.

It is the first time in the history of the European Union that the clause has been used, throwing out the window the strictures of fiscal orthodoxy that stipulate low deficits and small debts.

In Italy, aid groups have moved in to help set up temporary field hospitals. Britain announced that restaurants, bars, clubs and gyms would close from Friday and has called on medical workers who have retired or moved to other jobs to return to the country’s National Health Service.

Germany plans to double its intensive care capacity and has introduced new restrictions on movement in the southern state of Bavaria, amid warnings that the country could become the next Spain or Italy.

There is “exponential growth” in Germany, said Lothar Wieler, president of the Robert Koch Institute, the government’s disease control agency. By Friday, the institute had recorded nearly 15,000 cases of coronavirus, a number that has been nearly doubling every three days.

“We have gained time,” Dr. Wieler said, “but we are facing a similar development” to that in Italy.

Even as stringent new measures are put in place from Berlin to Barcelona, and health care services increase their capacity, it is unclear if they will be enough to stop the virus from overcoming an increasingly overwhelmed Europe.

Spain’s coronavirus mortality rate, like Italy’s, has been significantly higher than in other countries, confounding authorities.

With nearly 20,000 confirmed cases in Spain and more than 1,000 deaths, Mr. Simón warned that “the tough days are coming now,” adding that some medical units are being stretched “to the limit.”

In Spain, as in Italy before it, health professionals, working with too little equipment to meet the surging need, have had to begin making decisions about who may live and who may die.

“Admitting someone may mean denying the entry to someone else who may benefit more from it,” a Spanish organization representing intensive care providers wrote in a report this week.

The organization recommended giving priority to those who had more than two years of life expectancy, and taking into account a patient’s value to society — a term that could become bitterly controversial, which it did not define.

Spanish doctors said their hospitals were increasingly unable to treat all the older patients who need intensive care.

“We have to choose whom we intubate,” said an emergency room doctor at a hospital in the Madrid region, who requested anonymity because he wasn’t allowed to comment publicly. “We can’t use it on everyone anymore.”

Spain’s outbreak comes during a period of intense national political tumult that is testing its ability to respond to the virus.

After four inconclusive elections in four years, Prime Minister Pedro Sánchez helms a left-wing, minority coalition government and is grappling with a secession movement in the northeastern Catalonia region, where leaders are balking at his efforts to direct their response to their virus.

Catalonia’s government reacted more quickly than Mr. Sánchez, closing bars and restaurants last Friday and asking national authorities to help cordon off their region from the rest of Spain.

When authorities in Madrid enacted similar measures nationwide on Sunday, Catalonia’s separatist leader, Quim Torra, said he would refuse to hand over the control of his region’s police forces and health system to the central government.

Mr. Torra’s separatist government is pushing for additional restrictions, calling for the closure of airports and train stations, and checkpoints on roads across the region.

“This is a moment to make drastic, tough and efficient decisions,” Miquel Buch, the regional interior minister in Catalonia, said in an interview in his office in Barcelona. “When we in Catalonia were taking drastic measures not to let the disease propagate, in Spain they were not.”

Mr. Sánchez has repeatedly warned the Catalans and other regional leaders against fueling political differences at a time when Spain needs unity to deal with an emergency. And he has gained some cooperation from opposition parties, who endorsed his €200 billion, or $213 billion, relief package.

There has also been an outpouring of solidarity among citizens who, with few exceptions, have abided by the tough lockdown measures.

Some of the resistance that Mr. Torra has been putting up is purely symbolic. The national government is taking charge in the region, despite his refusal to sign a joint declaration handing control Madrid.

Still, the outbreak has tested Madrid’s ability to share power over public health, not just with Catalonia, but with other regions across Spain. Since health care is usually run by Spain’s regional governments, several took the lead in responding to the crisis.

From Galicia to the Basque region and the capital region of Madrid, regional governments implemented their own emergency measures before Mr. Sánchez put into force the nationwide lockdown.

Mr. Sánchez and Mr. Torra met on Feb. 26 in a bid to renew negotiations and end a conflict that reached a boiling point in 2017, when Catalan separatists made a botched attempt to declare independence. When they met, Spain had just a handful of coronavirus infections, but the outbreak ballooned, pushing other business aside.

Separatists have governed Catalonia since 2015, but the conflict has split Catalan society down the middle, with the divide now influencing how Catalans view the response to the coronavirus.

At a checkpoint outside Igualada, Jordi Morente, an air-conditioner technician who has been stranded in the town, said that he wanted the whole of Catalonia sealed off. But his colleague, Toni Navarro, wanted Catalonia to stop trying to go its own way. “Now is not the time for politics, they have to listen,” Mr. Navarro said of the Catalan government.

Some health professionals on the front line of the emergency said such political bickering was not helping.

“We have to work all together, we cannot even afford losing a single minute with political fighting,” said Antoni Trilla, the dean of the University of Barcelona’s faculty of medicine, arguing that central authorities needed to lead the response. “The whole country is facing this threat.”