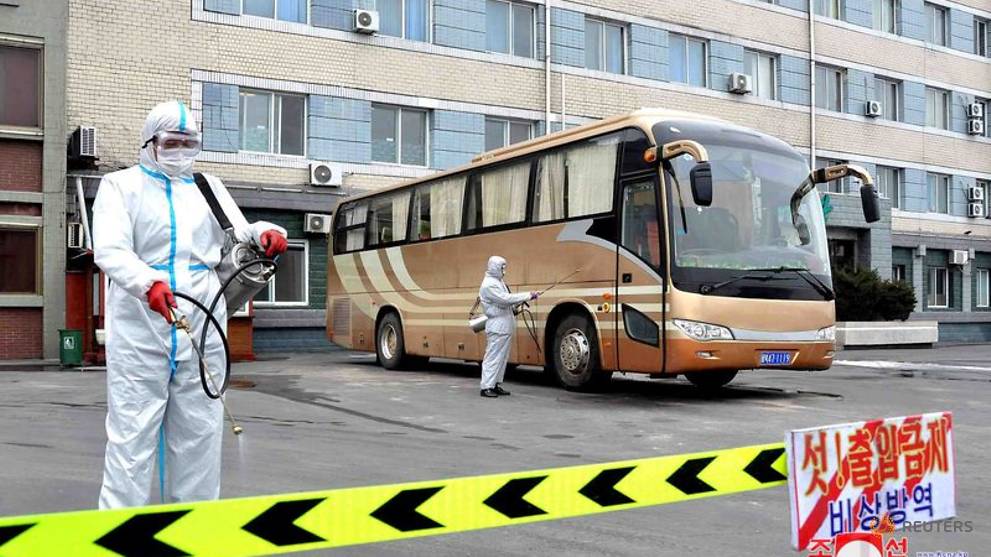 SEOUL: The first shipments of international medical aid are due to arrive at North Korea’s borders this week to shore up its defences against the coronavirus, but strict border controls could mean the stream of supplies remains a trickle.

Some aid organisations had to get emergency sanction exemptions from the United Nations to clear the way for the shipments and are now navigating North Korea’s border controls imposed in a bid to shut out the virus.

North Korea has not reported any confirmed cases of the coronavirus that was first detected in China late last year, though a top US military official said last week he is “fairly certain” there were infections in North Korea.

READ: No mask, no mistake for North Korea’s Kim

The North’s state-run KCNA news agency reported on Friday (Mar 20) that all but three foreigners who had been in quarantine had been released after “medical monitoring and examination”. It ordered all foreigners to spend 30 days in quarantine.

North Korea is especially vulnerable to a coronavirus outbreak as its health system lacks resources, in part, aid organisations say, because of international sanctions imposed over its nuclear weapons and ballistic missile programmes.

Aid groups have made urgent pleas for the United Nations to grant sanctions exemptions and it has approved six-month waivers for the World Health Organization, the International Federation of Red Cross and Red Crescent Societies (IFRC) and Doctors without Borders to send thermometers, portable ventilators, resuscitators, gloves, face shields, surgical masks, gowns and goggles.

More supplies of items from masks to test machines, sent by international agencies, were being held up in China, despite North Korea asking for them, two sources with knowledge of the matter said. They declined to be identified because of the sensitivity of the issue.

“North Koreans need assistance and have asked for it, but things are now on hold,” one source from a humanitarian group said.

KCNA reported on Mar 13 that as part of “super strong prevention measures” all imported goods were being quarantined for 10 days. State media has shown workers in protective gear disinfecting trains and trucks.

Doctors without Borders said in a statement emailed to Reuters that their supplies had arrived in Beijing and the border city of Dandong, and North Korean authorities had agreed to facilitate the transport despite the border closures.

The agency said it was till unclear when the supplies would reach North Korea.

The IFRC said it was working hard to send “urgently required goods”, but had to consider “restrictions on incoming goods” to North Korea. The federation did not say when it expected its shipment to arrive.

The WHO did not respond to calls from Reuters.

Experts say the planned supplies to help contain the coronavirus in North Korea are far short of what it needs.

Harvard Medical School’s Kee Park, who has worked on health projects in North Korea, said a lack of testing equipment may mean infections are going undiscovered.

“To confirm it you have to actually do confirmatory diagnostic testing,” he said.

North Korea has said it is monitoring thousands of people with possible symptoms. Russia said it had donated 1,500 coronavirus test kits at North Korea’s request.

“We should do everything in our power to provide help without delay,” Park said. “Because this is an emergency situation.”

North Korea has a high number of doctors per capita, and the authoritarian government is capable of controlling or blocking the movement of people.

But its health system is chronically under-resourced, defectors and foreign medical experts said.

On Tuesday, leader Kim Jong Un broke ground for a big new hospital in the capital, Pyongyang. He lamented the poor health sector and ordered that the facility be completed by October.

Many North Korean defectors say sick people have to rely on smuggled medicine or illicit drugs for treatment.

North Korea has made “indirect” requests to South Korean aid groups for supplies including masks, said Linton, who has worked on building operating rooms and tuberculosis projects in North Korea. He did not know if any had been sent.

Sanctions prohibit the import of computers or metal objects to North Korea, which restricts it ability to repair medical equipment, Linton said.

Intravenous (IV) fluids are made in hospitals, Linton said, adding: “Beer bottles or whatever bottles are used as containers for IV fluids, made at home.”