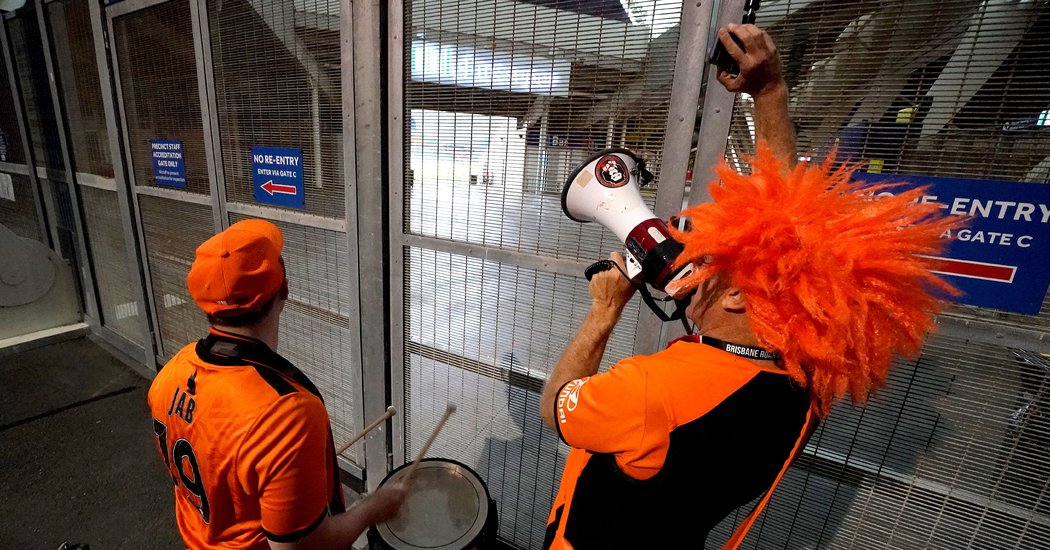 Sports, including some you probably never knew existed, keep shutting down amid the coronavirus pandemic. People keep trying to find ways to replace them.

Here are the latest developments from around the world.

Can’t actually play sports? Why not simulate them?

There may be no Bahrain Grand Prix this weekend, but Formula One plans to simulate the race. The result will be a “Virtual Grand Prix” with some of the actual drivers and celebrities behind the wheel using the video game F1 2019.

Unlike the ruthlessly capitalist Formula One series, in which the wealthiest teams tend to dominate, the virtual series will include a little socialism of sorts. “Due to the wide variety of gaming skill levels amongst the drivers, game settings will be configured in such a way to encourage competitive and entertaining racing,” Formula One said. That means some drivers, who aren’t regular gamers, will get advantages like reduced vehicle damage, anti-lock brakes and traction control.

Strat-O-Matic, the venerable board game, says it plans to simulate the baseball season with each game’s results — and statistics — announced on the day games were scheduled to be played.

Want to simulate some games on your own? The addictive soccer game Football Manager is free this week, and is setting records for number of players.

Leyton Orient, a fourth-tier soccer team in England, got the idea to run a simulated tournament on FIFA 20 and put out a call on Twitter to see what other teams might be interested in (virtually) entering. More than 100 answered, including teams from Italy, Sweden and Australia. The tournament gets underway this weekend.

We’ll take a shot and pick A.S. Roma to win the title. Can we bet on this somewhere? (Please?)

It’s one thing for venerable leagues like the N.B.A. and Major League Baseball to shut down for a time. Their long-loyal fan bases should largely return when the sport does. But what about brand-new leagues trying to get a toehold in the crowded sports marketplace?

Major League Rugby, in its third year, canceled its season on Thursday. It had been hoping for a breakthrough with the addition of some international stars like loosehead prop Tendai Mtawarira of South Africa and center Mathieu Bastareaud of France.

The XFL was in an even more unfortunate position, just five games into its first season since 2001 when it shut down for the year. Both leagues vowed to return.

The San Diego Legion (5-0) and Houston Roughnecks (5-0) will join the Montreal Expos (74-40 in the 1994 baseball strike season) as the uncrowned kings of their leagues.

The international wave of sports cancellations reached down into Central America on Friday. El Salvador ended its season, declaring Once Deportivo as champions, and Nicaragua shut down as well.

Bar sports had for a time seemed immune to cancellation, but snooker postponed its world championship at the Crucible in Sheffield, England, and hoped for a rescheduling in the summer.

And in Australia, where many sports have been pressing on without fans, the top rugby teams are looking to play a domestic-only competition, since travel to South Africa and New Zealand has been limited. Australian rules football, which opened its season in an eerily empty 100,000-seat stadium on Thursday, said that if any player tested positive it would shut down for a month.

Still on tap for this weekend (as of Friday): soccer from Angola, the Belarusian hockey playoffs, and, yes, Australian soccer and rugby leagues. (You can see the Sydney Roosters against the Manly Sea Eagles at 7:30 a.m. Eastern on Saturday on Fox Soccer Plus. If you’re desperate. Yeah, we’re really desperate here, too.)

Organizers of the Olympic torch relay simultaneously kept the event going while also urging people not to come.

It turns out if you stage a flashy event, people will turn up. Five hundred spectators turned up as popular comedians performed at a ceremony in Ishinomaki.

“It is not a good decision,” Kiyotake Goto, 44, told Reuters of her choice to come to the event, “but I am not sure if I will get another chance to see the caldron.”