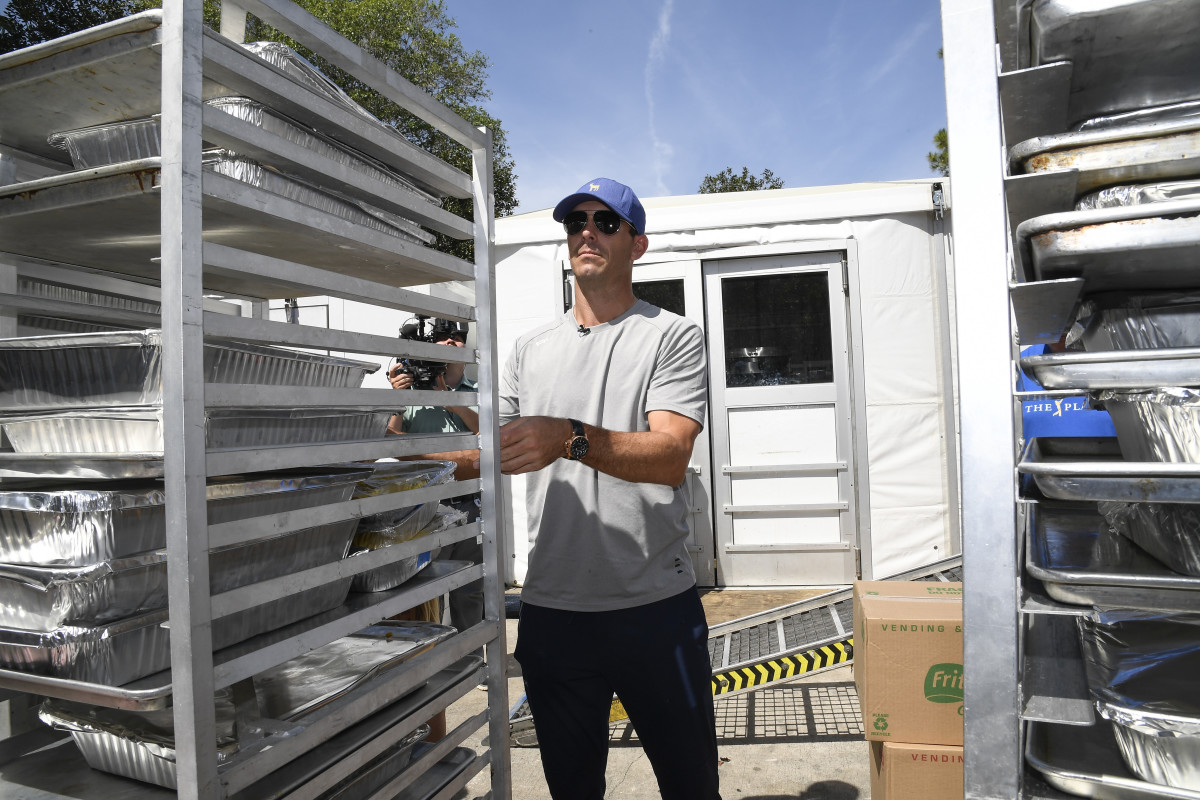 Like all major sports around the globe, the PGA Tour hit the pause button on its season because of the COVID-19 outbreak. While the majority of tour pros left TPC Sawgrass following the cancelation of The Players Championship and went their separate ways, Billy Horschel sprang into action to help those in need.

Horschel lives in Ponte Vedra Beach, Fla., the site of The Players, and even though he was devastated by the news of golf being canceled for the foreseeable future, the veteran tour pro felt like there was a way he could help turn such a negative into a positive.

SI.com recently caught up with Horschel for “A Quick Nine” while he is home during this unexpected time off. The five-time PGA Tour winner talked about the disappointment of canceling his hometown event, how he and his family took action and when we may see professional golf again.

SI: What was it like for you when you were told that The Players Championship and upcoming PGA Tour schedule was canceled?

Billy Horschel: I had this rush of a feeling of sadness that came over me. It’s our players’ championship. It’s an event that I look forward to every year. I live here in town. I have so many family and friends come up and watch me. It was just sadness.

And then the entire sports world. I live on sports, like the majority of Americans in this world. I love sports. I love watching sports and to know that there’s no more sports going on in the world at this time, it’s just a great sense of sadness.

SI: Despite the disappointment of the cancelation, you very quickly tried to turn the negative into a positive by helping people in need. How did that come about so quickly?

Horschel: I talked with the Tour about the idea that if some of these events got canceled, the charities and organizations that are supported by these events, may possibly go under. They rely heavily on the money that they receive from these events, so when the Players was canceled the first thing I thought of was Feeding Northeast Florida. It’s a charity and the local food bank that my wife and I have been heavily involved in since 2014. I was like, “Hey, there’s a lot of food that needs to be donated.”

In talking with the Tour and Jay [Monahan] they decided we were going to donate all the food from The Players to Feeding Northeast Florida.

SI: Once that decision was made to donate the food that was supposed to feed more than 200,000 fans at The Players, how did you and your family spring into action?

Horschel: My family and I helped out that Friday afternoon loading up the food onto Feed Northeast Florida trucks at the TPC Sawgrass clubhouse. There was roughly two tons worth of food. $60,000 worth on Friday.

My wife and our two girls helped load the food and I will say I was a very proud dad seeing my girls want to help out. They understood what we were trying to do and our mission.

Overall it ended up being about 22 tons of food and roughly $2 million worth of food donated to Feed Northeast Florida.

SI: You donated all of your $52,000 earnings from The Players Championship to charity, but we’re starting to see the trickle-down effects of the COVID-19 virus.

Horschel: It can be very hard. They rely on the community support and a lot of donations. Now these people, that may have supported the charities over the years, are now not getting paid. They don’t have a job. They’re not earning a salary or a paycheck. So it’s very tough. I’ve had conversations with the people at the PGA Tour on how we can help raise money, seeing how we’re not going to be playing golf anytime soon.

The Tour is looking at a lot of options right now to see how we can support these charities and organizations. Not just Feeding Northeast Florida and the charities in my community, but also the charities that are affected by these other tournaments that will not be taking place.

SI: How about this layoff in the schedule? You’ve got kids at home and don’t know when you’ll be going back to playing golf. How’s it going to be for the Horschel family?

Horschel: It’s been a challenge already. Just like all other Americans out there, it’s a little bit of a challenge trying to figure everything out.

We’re in the middle of our season and usually we know when we’re going to play and when we’re not going to play. But now we’re put on this temporary hiatus and we usually don’t get that unless you have an injury. At least with an injury there’s a little light at the end of the tunnel. Right now, we just don’t know when we’ll start playing again.

Horschel: Yeah, I’m enjoying the time being a home. It’s a little unusual. I love to travel. I love to play golf, I love to visit other places, but I’m enjoying being home with the kids just like everyone else and trying to make it work.

Trying to figure out how to get the kids to burn some energy. My kids are young, so school’s not vitally important. We’re just figuring it out day by day.

SI: Will you be doing much golf-related activities?

Horschel: Yeah. If there is a silver lining, I’m going to be testing some clubs out. I left PXG about a month ago, so all the testing I was going to do at the end of this year, I’m going to have time to do now. So I’m in the process of doing that already.

SI: I see you’re also working out. You posted on Instagram about trying to beat Rory McIlroy on Peloton. How’s that going?

I’m just going to try and do a better job and take care of my body. I’ve got a lot of time off to make some gains. I wanted to challenge myself. Rory is pretty good on Peloton and he’s in pretty good shape and I feel like I’m in pretty good shape, but I would say he’s probably a little bit better than me. Maybe one day I’ll be able to nip him on the Peloton.

I’ve got to burn energy. I don’t like being still and not having anything to do so I have to just try and figure out ways to get through the days.

SI: What does your gut tell you? When do you think you guys will be back on the golf course for the PGA tour?

Horschel: I’m an optimist. I always have a positive outlook on life and everything. I feel like the American people are taking this very serious and really trying and be proactive.

I think the majority of people want to get back to normal life as soon as possible. So, they’re going to do whatever they can to help get there soon.

Maybe mid-May, late-May. Just based off the CDC recommendations that’s when we’d be able to get back to playing. But like I said, I’m an optimist.