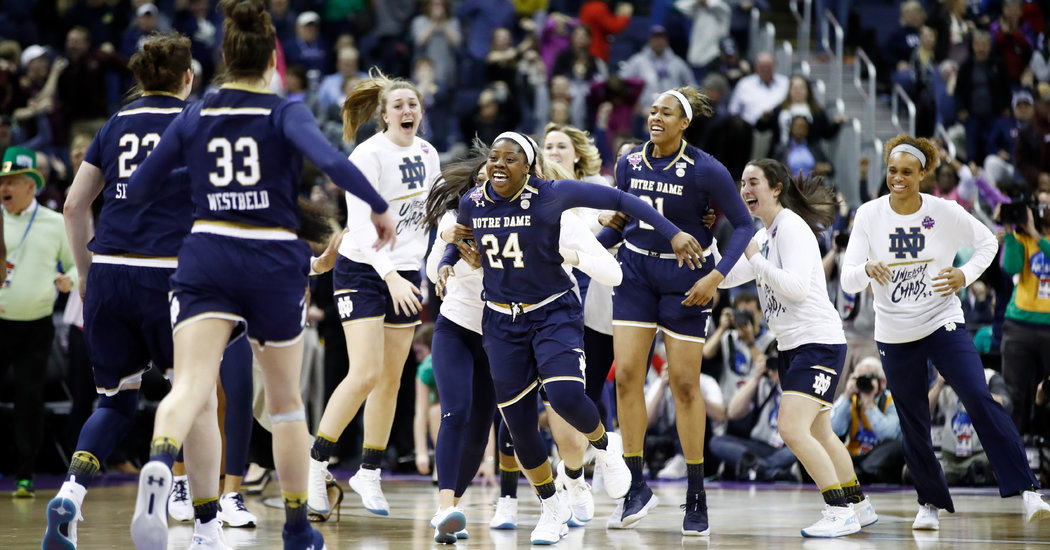 “You’re supposed to be watching basketball now,” Muffet McGraw, the women’s basketball coach at Notre Dame, said the other day. “Instead, I’m watching MSNBC and CNN and about to be homebound. That’s not exactly uplifting.”

The cancellation of the N.C.A.A.’s men’s and women’s basketball tournaments, the three-week hoops bonanza known as March Madness, upended plans for bracket pools and a lot of “working” — less on that important office memo and more on picking the right upsets. The TV marathons that were supposed to start this week, with game after game after game, won’t happen.

Because of the coronavirus pandemic, the arenas will sit empty, and the teams will stay far from the locker rooms.

But because the men’s tournament has been played since 1939 and the women’s competition since 1982, there are plenty of great games and highlights to be found online. We asked some of the most successful coaches in college basketball to pick their favorite tournament games, whether they won them, lost them or, like many of us, just sat at home and watched. (Surprise, surprise: They typically preferred remembering matchups that ended with them advancing or hoisting trophies.)

“It never gets old watching those games,” McGraw said. “It’s like you’re addicted.”

What he’d watch: Wisconsin vs. Oregon in the third round of the 2014 men’s tournament.

Why he’d watch it: Wisconsin was a No. 2 seed but down by a dozen points at halftime.

The first half against seventh-seeded Oregon was unsettling for the Badgers, who had won their most recent tournament game by 40 points.

Frank Kaminsky, who set Wisconsin’s single-game scoring record that season, had missed a 3-point shot and a layup in the first 90 seconds. Ben Brust, at the time the finest 3-point shooter in Wisconsin’s record book, took three shots in the half and made just one. Still, the margin was narrow until Oregon, whose speedy offense had discombobulated Wisconsin, blended a series of free throws with some jumpers to build a comfortable lead.

But Wisconsin began to chip away at Oregon almost as soon as the second half started. Not even five minutes in, the Ducks’ advantage fell to 1 as Kaminsky, having sputtered to life, made a 3-pointer, and the clamor inside Milwaukee’s Bradley Center rose.

The game was still close with just over a minute to play when Brust took a pass and immediately launched a shot over a jumping Jason Calliste. Nothing but net for 3 and the lead. Wisconsin made eight free throws in the last 32 seconds — but missed one and left Oregon within a possession of a tied game. Unfazed, Wisconsin built a bigger lead.

“Those employees who work security and event management said it was the loudest they ever heard the Bradley Center,” Gard said. “If that game’s not in Milwaukee, we probably don’t make that comeback — that venue turned into a home court times 10.”

Why he’d watch it: Jack Givens was having a night, and Hamilton, a young assistant coach for Kentucky, was having doubts about the judgment of his boss.

Givens, a forward from Lexington known as Goose, seemed just about unable to miss in St. Louis as the Wildcats tried to capture their first national title in two decades. There were jumpers from the top of the key. A tipped ball into the net. Long shots that were worth only 2 because the 3-point line wasn’t yet part of the college game.

“In college, you’re growing, you’re maturing and you’re developing as a player, and sometimes you can get locked into a rhythm or a focus that will allow you to have those types of moments,” Hamilton said. “They’re special and unique.”

But while Givens disassembled the Duke defense to score a career-high 41 points — roughly 44 percent of Kentucky’s points that game — Hamilton was fretting on the bench. Joe Hall, the Kentucky coach, had resolved that every player on his team would play during the title showdown with Duke, which had never won a national championship.

“They were trying to come back, and he was more concerned about everybody getting into the game,” Hamilton said. “I was a little nervous about that, because it wasn’t like we were so far ahead that we could afford it.”

Hamilton said he would personally spend this week focused on more recent history, looking at tape of Florida State games this season. But that 1978 game, he said, was the one that he liked to think about.

“That’s the one I’d be dialing up, because that’s the one where we cut those nets down,” he said. “And that’s what our intentions were with our team this year, and we didn’t get that opportunity.”

Why she’d watch them: In the semifinal, Notre Dame blew a 5-point lead to Connecticut in the final half-minute of regulation, sending the game into overtime. Arike Ogunbowale, a Notre Dame guard, was upset, McGraw said, because she didn’t have the ball in her hands enough in that stretch.

“She said she was going to get the ball at the end of this one,” McGraw said.

And Ogunbowale did, hitting a shot from the corner with 1 second on the clock in overtime to give the Irish a 91-89 victory over the previously undefeated Huskies.

Two nights later, in the final against Mississippi State, the score was tied, 58-58, in the final seconds when Notre Dame inbounded the ball. The ball was meant to go inside, but Mississippi State shifted its defense, and the ball instead went to Ogunbowale in front of the Notre Dame bench. She dribbled twice toward the corner and with a tenth of a second left, she hit a shot from beyond the 3-point arc and the Irish won, 61-58.

The shot completed the biggest comeback in a women’s championship game, as Notre Dame recovered from a 15-point deficit in the third quarter. And it capped a season in which Notre Dame had been beset by injuries, with little going right.

“We never seemed to get a break,” McGraw said. Then they got two magnificent breaks in the Final Four. McGraw has seen replays of Ogunbowale’s shots many times on recruiting videos, including her own reaction to the championship-winning 3-pointer.

“My mouth is open in total shock,” she said.

What he’d watch: The 1985 men’s national title game, which featured Georgetown and Villanova, and the 2008 national championship game between Kansas and Memphis.

Why he’d watch them: Self, like many coaches and fans, usually favors games decided by “the shot.”

Forget the rebounding, the defense or whatever happened on some possession in the first half. For Self, all of it is a mere prelude to a grand moment that might not even come.

“That’s what I remember when I think of games: I think of the shot in the biggest games,” said Self, who had Kansas in position for the No. 1 overall seed in this year’s tournament.

But he remains taken by the 1984-85 Georgetown team that rose out of Washington when he was 22 years old. The Hoyas seemed an unbeatable behemoth: Patrick Ewing was the center, and John Thompson was leading a program trying to repeat as national champion.

Enter Villanova, a team that had not cracked the top 20 in any poll that season, in a showdown with the national title on the line.

“They were going up against a team that was head and shoulders better than everybody,” Self said. “If a seven-game series was ever played with that team, everyone would have lost. But that’s what makes the N.C.A.A. tournament so good: You just have to be better one night.”

Villanova proved plenty scrappy and made 79 percent of its shots against a defense that had stopped just about every other offense it faced. The teams swapped leads nine times in the second half before the upstart Villanova took the lead for good.

And 23 years later, Self got to see one of those shots he so enjoys.

Kansas and Memphis had rosters stocked with future N.B.A. players, and Kansas took a 5-point lead into halftime. Memphis found more of an offensive rhythm after intermission and went up by 9. There were two minutes to play.

Kansas hit some free throws, and Darrell Arthur landed a basket. Then, with 2.1 seconds to play, Mario Chalmers sized up a 3-point shot and tied the game. Kansas dominated overtime.

“Mario made the shot,” the coach said. “Selfishly, that’s the game that kind of puts everything together for me as a coach. We were down 9, and the body language didn’t change. There was no pouting. It was just, ‘Let’s do it,’ and we did it.”