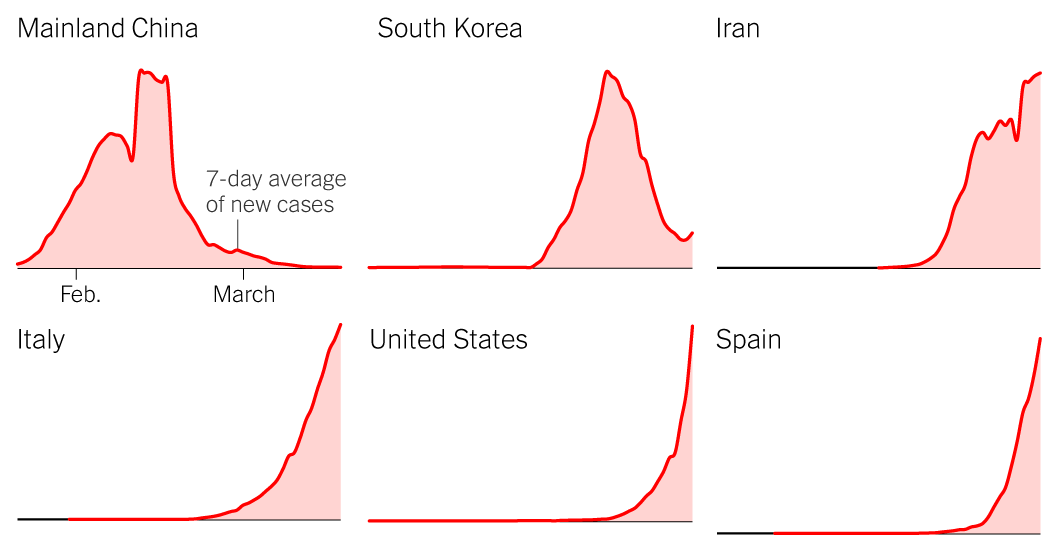 Just a few weeks ago, China was overwhelmed by the coronavirus pandemic that began in Wuhan. Since then, it has drastically reduced the number of new cases, what is known as flattening the curve.

South Korea appears to be headed on a similar path.

These charts track the number of new confirmed cases each day. Each red line is the seven-day moving average, which smooths out day-to-day anomalies in how the data are reported by authorities. The number of cases in China had a big jump in mid-February because officials changed the way cases were counted.

Despite their close proximity to China, Singapore, Hong Kong and Taiwan have managed to keep the number of cases down with some success, through vigilant monitoring and early intervention.

But recent spikes in those places suggest that they are still at risk. For example, 21 of the 23 new cases in Taiwan and at least 13 of the new cases in Hong Kong on Wednesday were people who had recently traveled overseas.

More countries are now implementing travel bans or mandatory quarantine for returning travelers, as the pandemic continues to ravage the world, sickening more than 210,000 people as of Wednesday evening.

In the United States and five other countries, the number of known coronavirus cases is still growing rapidly. They have all reported more than 4,000 new cases in the past week.

These five countries have had less severe outbreaks so far but still reported more than 1,000 new cases each in the past week.

Where Countries Are on the Curve

Here’s a look at the trajectories of coronavirus cases in all of the countries that have had more than 50 confirmed cases so far. Scales are adjusted in each country to make the curve more readable. The countries are sorted by the number of new cases in the past week.