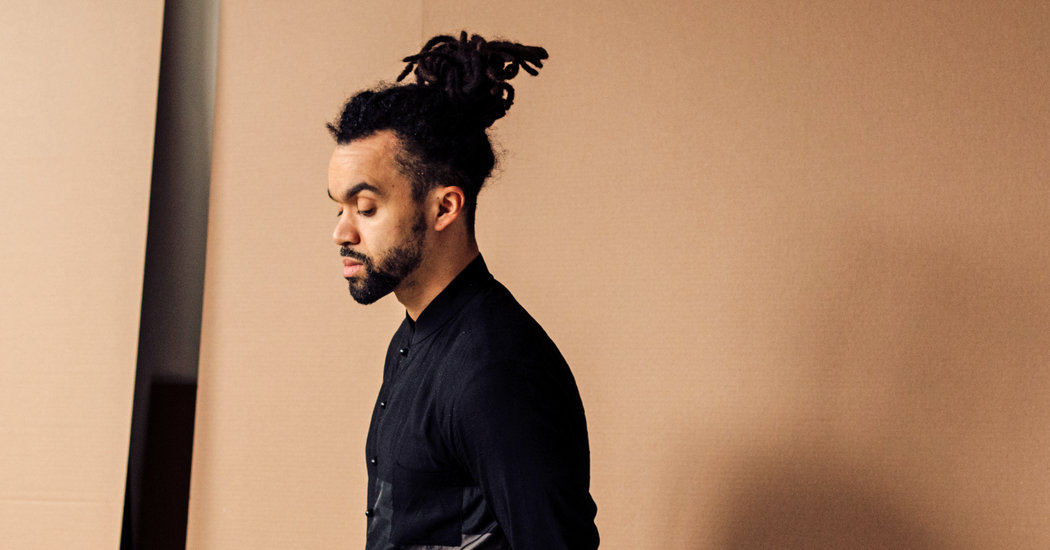 The artist Nate Lewis left his job as a nurse three years ago, but life on the neurocritical intensive care unit produces memories that don’t readily fade.

The patients battling strokes, seizures, and head injuries. The specialists debating treatment based on test numbers and images. The anxious families keeping watch, looking to the nurse for explanation and reassurance.

“I would show up and these families are giving me everything, telling me their life stories,” Mr. Lewis, 34, recalled of his years at a hospital near Washington, D.C. “I realized what an honor it was to take care of them at this time in their lives.”

One high-stakes drill became familiar: When a patient’s brain, heart or lung functions exceeded the safe range, an alarm would sound, and the monitor would start printing out the relevant graph until the situation was addressed.

The discarded printouts, Mr. Lewis realized, were a visual distillation of the experience. “I was really invested in care for these people,” he said. “It was really dense. So I started to make work with the rhythms of patients. Like, let me try this.”

A mixed-media piece from 2013, titled “this is your heart on a prelude,” greets visitors entering Mr. Lewis’s first New York solo exhibition, at Fridman Gallery. (The gallery is open by appointment and has posted images and video from the show online.) The small collage includes four strips of patients’ electrocardiogram readings carefully cut and backed onto sheet music.

Mr. Lewis recalled that he wanted to use the original printouts, despite their low-grade paper, until a friend convinced him to scan them onto more resilient archival stock. “I wanted the real thing,” he said. “But he was like, ‘It’s contemporary art, it’s cool.’”

Before then, Mr. Lewis’s creative work consisted mainly of T-shirt designs. He hung out with a Washington crowd of artists and musicians, but knew little about art history or formal practice. Admission to the residency program at Pioneer Works in Brooklyn, in 2017, prompted him to quit his nursing career, move to New York City, and commit to art full-time.

He has come far since then. Mr. Lewis now makes and digitally alters photographs, then transfers them onto large sheets of paper, which he sculpts by means of cuts, perforations, rubs, and applications of graphite and ink. The base images in one series, “Signaling,” are portraits — bodies in motion, dancing or mid-exercise. Another series, “Probing the Land,” works off photographs of the statues of Confederate generals in Richmond, Va.

Black-and-white with sparse flashes of color, the pieces resemble collages but are in fact single sheets, exactingly detailed, with a deconstructed energy. The kinetic charge extends to a two-channel video of a man shadowboxing. The show has a soundtrack, too: Five experimental jazz musicians supplied loops that Mr. Lewis produced into a single work. It plays continuously in the gallery like a sonic sculpture.

From his emphasis on the body to his attraction to working with paper, which he likens to an organism, Mr. Lewis carries into his art concerns with diagnosis and care forged in the I.C.U. “My whole practice is about an assessment of something,” he said. “The slightest detail matters.”

He arrived in New York with a beginner’s mind. He read his first art history book. He keyed in on influences — Hank Willis Thomas, Titus Kaphar, Rashaad Newsome, Jacolby Satterwhite. He merged into the artist community, at once keen for input and to develop his own voice.

The curator Regine Basha, who directed the residency at Pioneer Works when Mr. Lewis took part, said he stood out for his seriousness and motivation from his medical experience.

“He was doing a lot of soul-searching work, as someone who was developing a visual language for empathy,” she said. “Not just person-to-person, but physical, bodily empathy.”

“And when he got into the studio,” she added, “he was the hardest worker there.”

Mr. Lewis credits the residency for breakthroughs in technique, notably the addition of color and, crucially, working with ink. Another inspiration came on a visit to the Prado, in Madrid, where he saw a video installation by the Iranian artist Farideh Lashai that, in turn, built on altered reproductions of etchings from Goya’s “Disasters of War,” set to Chopin nocturnes. Mr. Lewis uses the same music in his boxer video.

A self-described jock, Mr. Lewis grew up obsessed with basketball, boxed a little and practices capoeira. He implicates his own body in his work, making self-portraits by the same method as portraits of his friends.

But he has also read Harriet A. Washington’s “Medical Apartheid,” on medical experimentation on African-Americans — a theme explored by contemporary artists such as Doreen Garner. He recalls realizing, while still working in hospitals, that the medical system was subtly biased toward white patients.

“Was I influenced by that culture? I certainly was, and I’m so ashamed,” he said. “Because I knew that I’ve been taught to give less to black people, to this day I try to give more.”

His series on the Richmond monuments scrambles the image of Robert E. Lee and other Confederate leaders, dissecting the smooth statuary into phantom horsemen with many patterns and textures. It alludes to current debates about representation, less as a call to replace the statues than an inspection of how they operate. “The city orbits around them,” he said. “I understand why people are so intent on them not coming down.”

Mr. Lewis’s work with music, too, connects to the I.C.U., and to the subtle shifts in a patient’s functions he overheard. “I was already into music, but there was something extra in the listening,” he said. He pulled up a short video of an echocardiogram on his phone, to demonstrate. “You have to listen for diminished sounds, or absent sounds. It’s hard.”

When one of his musical collaborators, the drummer and producer Kassa Overall, held a residency at the Jazz Gallery last year, Mr. Lewis photographed each concert, then used a composite image as the basis of a work on paper that was shown at the final performance.

Mr. Overall and four others — Melanie Charles, Ben Lamar Gay, Matana Roberts and Luke Stewart — have provided the tracks that Mr. Lewis melded into the sound work in his show (you can hear them on the gallery’s website), but left Mr. Lewis to shape it, an act of trust.

“I do a lot of improvisation but then I meticulously edit everything, and he does that with his visual choices,” Mr. Overall said.

In jazz, Mr. Lewis said, he felt a transmutation of black spirit and resilience that he expressed in physiological terms.

“These people, that cognitive space, what they went through, what was happening in their cells, their hormones, their heart — because of all those things they came out with the beginning of black sound in this country, which led to so many different musical forms,” he said.

He was back in diagnostic mode.

“I really try to bring my worlds together,” he said.

Through May 31 by appointment at Fridman Gallery, 169 Bowery, Manhattan; available online at fridmangallery.com.