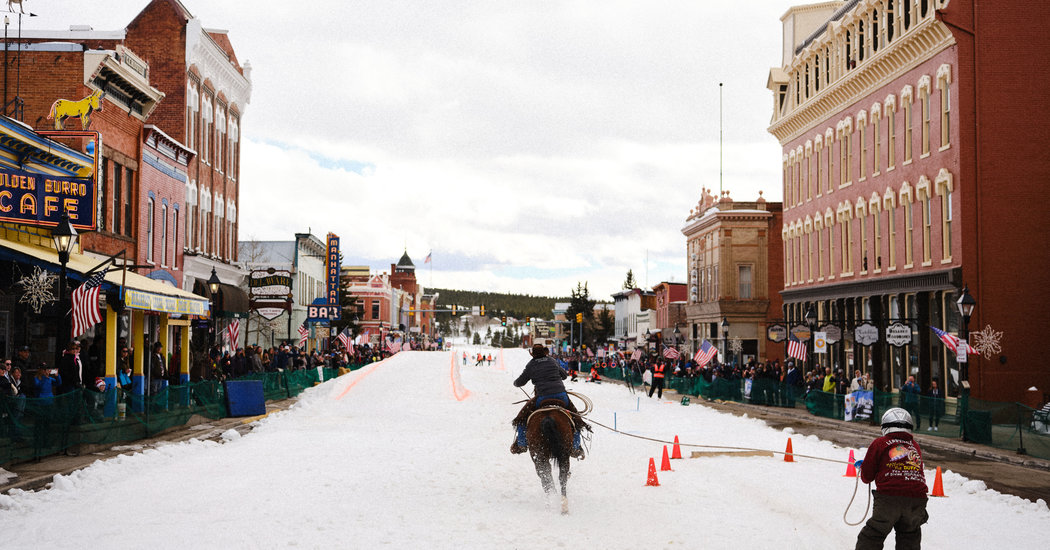 LEADVILLE, Colo. — American flags flew, the pungent smell of horse manure permeated the air and the pounding of thundering hooves over a thick layer of slushy snow reverberated.

A horse pulling a skier on a rope came charging along — down Harrison Avenue, the main drag in this small town, as hundreds of spectators roared.

They were racing in a skijoring competition, one of the last large-scale winter sports events to take place in Colorado before the coronavirus pandemic seized the nation’s attention this month.

The Leadville Ski Joring Competition, which has taken place for 72 years, offered a glimpse into a cherished sport not widely known outside the Mountain States.

Derived from a Norwegian term meaning “ski driving,” skijoring is believed to have originated hundreds of years ago in what is now Scandinavia among Indigenous people who were pulled on skis behind reindeer.

The Leadville event was among the first of the many American iterations. Here, the skier negotiates a series of jumps and attempts to spear five dangling rings onto a baton as the horse runs as fast as 40 miles per hour. The team with the fastest clean run — with all rings speared and each jump landed — wins.

Jason and Greg Dahl have won numerous times. The brothers, 39 and 36, grew up in Leadville. At an elevation of almost 10,200 feet, it is the highest incorporated city in America, and during the silver rush of the late 1800s, it ranked among the world’s richest.

On March 8, a Sunday, the Dahls completed their runs in the open division, which included five skiers. Afterward, Greg’s knuckle was bleeding and Jason had a welt on his cheek where he took a hoof-molded snow chunk to the face.

As children, the Dahls were ski racers. Their father, Jeff, who wears 10-gallon hats and cowboy boots, moved to Leadville from Minnesota and began buying quarter horses. He rode them in skijoring events while seasoning his sons for a role at the end of the rope.

“He dug deep into the western way of life,” Greg Dahl said.

“My dad always says he couldn’t find skiers good enough, so he made them,” Jason Dahl added. “We also water-skied as kids, so it was the perfect hybrid. We had 100 acres north of town, and we’d set up a practice course. We’d be out there after school, training.”

Most skijorers use slalom carving skis and wear goggles and full-face helmets. The most important thing for a successful jump is building enough speed to put slack in the rope, they said, enabling them to negotiate jumps and rings without a taut connection to the horse dictating their movements.

“Just like ski racing, being early is everything,” Jason Dahl said. “Then you have time to get your rings, to come off the jumps in good position, to make good landings. If all of those things are in place, you have time to grab rope. The closer you finish to that horse — if you get 15 feet closer, that’s a tenth of a second. That’s enough to win it sometimes.”

This year, Greg Dahl walked away with the overall win, along with Savannah McCarthy and her horse, Tank.

McCarthy, 20, of Durango, Colo., and her parents are longtime horse owners. McCarthy did some barrel racing and rodeo pageants as a child and first tried skijoring at age 12. Her first victory in Leadville came at 13.

“My mom had me in her backpack on trail rides when I was a baby,” she said. “I started riding my own horse when I was 3. The first time I got out of a trot, I was like, this is fun. Every kid likes going fast, but it was brought to a new level with Tank. He is insanely fast. I was automatically hooked.”

While it might appear that it is the skiers taking the greatest risks in skijoring, the stakes are often higher for the rider and the horse. As with any type of horse racing, skijoring horses do occasionally suffer severe injuries.

McCarthy and her horse have had close calls. In one of her first contests, the rope became hooked around the horn of her saddle, and the skier’s velocity pitched horse and rider out of control, and they crashed into a minivan. Tank once had a tendency to continue galloping beyond the finish line; one time the pair crashed into a snowbank with McCarthy stuck beneath her horse.

“I was devastated, laying there under him crying because I thought his leg was broken,” McCarthy recalled. “I think he was just in shock. We were both OK.”

Dana Stiles, 55, a champion rider, said: “When skiers crash, it always makes the highlight reel, but when a horse goes down, it’s horrifying. The rider and skier enter this crazy sport wholeheartedly, but the horses don’t get a say.”

Even if it’s only cuts and bruises, there is usually an injury toll at a skijoring event. Besides the bruise on his face, Jason Dahl’s thick masonry gloves were burned through from the rope after the race. His worst injury, he said, was “an exploded knuckle” sustained years ago when he smacked his hand onto the post holding the rings. The injury required seven surgically implanted screws.

Greg Dahl’s worst injury came eight weeks ago when he had “an equipment malfunction.”

“I was skiing around a gate and my ski came off,” he said. “I was out on the whip of the rope — probably doing about 60. I just slapped down. I broke three ribs and collapsed a lung.”

Yet the Dahls, like many skiers and riders, insist skijoring is worth it for the rare sense of camaraderie that exists among its participants.

Of course, there is also that one-of-a-kind rush.

“You’re nervous at the start,” Greg Dahl said. “The horse is nervous. There are so many unknowns. Am I going to drop the rope? Is the rope going to wrap around my neck? Am I going to do a face plant? Is the horse going to step on me? You’ve got to be an adrenaline junkie.”

Jason Dahl added: “There’s all the things you can account for, then half of them that are totally out of your control. It’s what keeps us coming back.”