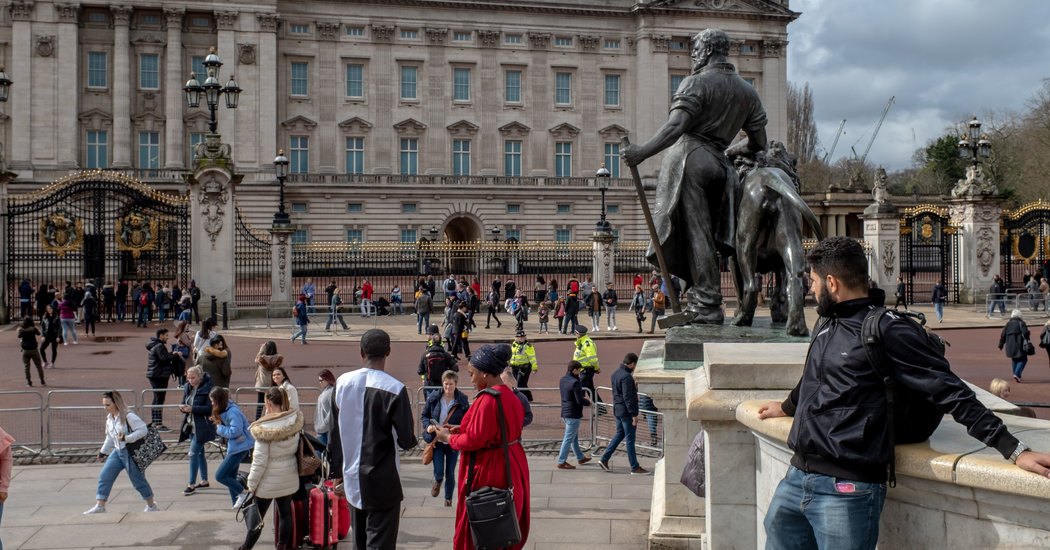 LONDON — Queen Elizabeth II on Thursday urged the British people to pull together even as they move apart, hoping to steady a country that has veered between alarm and complacency as the government has struggled to present a consistent message about its response to the coronavirus.

“We are all being advised to change our normal routines and regular patterns of life for the greater good of the communities we live in and, in particular, to protect the most vulnerable within them,” the queen said.

The statement — issued from Windsor Castle, where the queen sequestered herself Thursday as the outbreak bore down on London — was a familiar appeal to national solidarity from a monarch who has seen her country through traumas from World War II and Brexit to the death of Princess Diana.

But it took on added resonance at a time when Prime Minister Boris Johnson has offered a more muddled message, mixing warnings about the coronavirus with more relaxed efforts to suppress its spread. On Thursday, schools and pubs in Britain were still open, though the schools will close on Friday.

The queen left no doubt that she intended to self-isolate, and expected those around her to do the same.

“Many of us will need to find new ways of staying in touch with each other and making sure that loved ones are safe,” she said. “I am certain we are up to that challenge. You can be assured that my family and I stand ready to play our part.”

On Thursday, Mr. Johnson reiterated his warning to avoid pubs, restaurants and other crowded places. But he again stopped short of closing them, as other European countries have. He also ruled out a lockdown of London, like those in Paris and Madrid, which had been widely rumored in the news media.

If people act with “ruthless, determined collective action,” Mr. Johnson said, Britain could turn the tide on the pandemic in 12 weeks. He praised Britons for doing their part, but said there were pockets of resistance in London, which might demand stricter government action in the coming days.

The lethal danger the virus poses to older people has put the royal family — whose members are used to being in the public eye in times of crisis — in a predicament they have rarely experienced: having to lay low.

The queen turns 94 next month and her husband, Prince Philip, is 98. Even her son and heir, Prince Charles, is 71, a year older than the age at which the government has urged people to quarantine themselves.

The family just lost its best-known younger members, Prince Harry and his wife, Meghan, who left for Canada after negotiating their withdrawal from royal life. That leaves Prince William and his wife, Kate, as the only senior members of the family who can still carry out regular public appearances.

The queen was at work in Buckingham Palace until Thursday, but she abruptly left London for Windsor Castle, where officials say she will be exposed to fewer people. The palace scrubbed her schedule, postponing a visit by Emperor Naruhito of Japan and his wife, Empress Masako, as well as several garden parties scheduled for the spring.

Rumors that Prince Philip had died flared up on social media on Wednesday, prompting the palace to issue a statement saying he was “absolutely fine.” In fact, the Duke of Edinburgh, as he is also known, was flown by helicopter from Sandringham, another of the queen’s residences, to join the queen at Windsor.

Prince Philip has lived in relative seclusion at Wood Farm, a modest cottage on the grounds of Sandringham, since he retired from public life in 2017. He spends his time there reading, painting and driving a horse and carriage around the grounds of the estate. The queen visits him from time to time.

But as this crisis unfolds, she will not be able to play the role of her father, George VI, who was a visible presence during the Blitz, when German air raids forced London into a more draconian lockdown than it has so far endured with the coronavirus. The king and his wife, Queen Elizabeth, toured bombed neighborhoods and consoled residents.

After Buckingham Palace was bombed in September 1940, Elizabeth, who was known later as the Queen Mother, said she could “look the East End in the face,” referring to the working-class neighborhoods of East London.

Princess Elizabeth, the future queen, worked in the auxiliary service as a driver and truck mechanic during the war — an experience that left a lasting imprint on her, not to mention giving her useful skills in fixing an engine.

In her statement on Thursday, the queen paid tribute to the “scientists, medical practitioners and emergency and public services.” She did not mention Mr. Johnson, who has repeatedly cited scientific advice to justify his government’s response.

But critics faulted the government for resisting drastic moves — like closing schools — and then reversing itself after other countries had moved first or new scientific data suggested a worsening outbreak.

“It looks like the worst of all worlds,” said Anand Menon, a professor of European politics and foreign affairs at King’s College London. “They have followed their scientific advice and then backtracked from it.”

When Mr. Johnson urged people to avoid pubs, bars and restaurants, his own father, Stanley Johnson, insisted that he might ignore the advice. Many people appeared to conclude that if the government really believed its message, it would have used its powers to close pubs and non-essential shops.

“The prime minister is very keen to be liked — as we always suspected — and he seems incapable of telling people things they don’t want to hear,” Mr. Menon said. “He’s like the weak parent saying to their kid, ‘Don’t do that darling,’ but letting them carry on.”

On Wednesday, the government decided to close schools by the end of this week, a step it had resisted even as it became standard across the Continent. But while Mr. Johnson said that exams would not take place, he did not say what would replace the tests that normally determine students’ future.

He also sowed confusion about a potential lockdown of London, declaring on Wednesday that he might have to go “further and faster,” an admission that the British news media took as confirmation that it was looming.

On Thursday, Downing Street denied the reports and accused members of the media of acting irresponsibly. There was, officials said, no plan to shut down public transportation, restrict people from leaving their homes or to put the army on the streets to enforce a quarantine.

In other parts of Europe, where the death toll is rising and hospitals are reaching their breaking point, the military is already playing a major role.

As the dead piled up in the northern Italian city of Bergamo, the army has been called in to transport bodies to other municipalities to be cremated. Italy, where more than 3,400 people have died, surpassed China’s death toll on Thursday.

In Hungary, the military moved Thursday to take control of 140 companies deemed to provide essential services in the energy, telecommunications, transportation and health care sectors. And in France, patients are being transported to military hospitals.

The French president, Emmanuel Macron, acknowledged Thursday the “difficulty of the moment” and urged people to respect distancing measures, while encouraging those who cannot work from home to report to their jobs.

But the prospect of anything like an ordinary life seemed far-fetched, as even senior officials across Europe have contracted the virus.

The latest was Michel Barnier, the European Union’s chief Brexit negotiator, who announced Thursday that he had tested positive but said he was doing well. His diagnosis appeared to put Mr. Johnson’s goal of striking a new trade deal with the European Union by the end of this year even further out of reach.