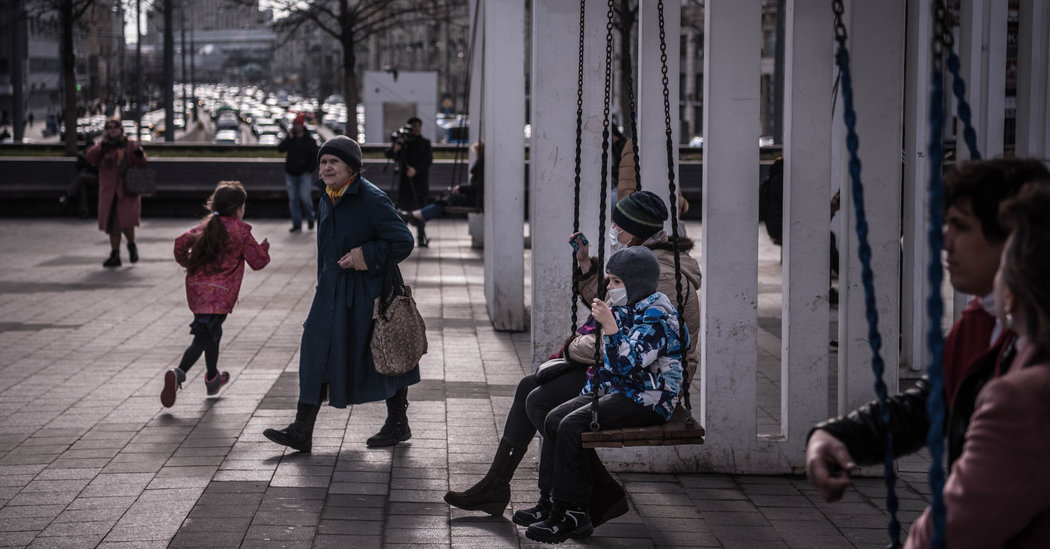 As the Russian president has consolidated power, the police and security services have spent years upgrading their capabilities, from facial-recognition tools to crowd-control methods. Now, the spread of the virus provides a sudden test for those capabilities — and a high-stakes opportunity for Mr. Putin to win support for his hard-line measures.

In Moscow, which has a densely packed population of 13 million, the authorities on Wednesday reported at least 30 new confirmed cases of the coronavirus — an increase of more than 50 percent from the total of 56 cases a day earlier. Most, but not all, of the new patients were people who had arrived recently from Europe, the city government said. The city reported Russia’s first coronavirus death on Thursday, a 79-year-old woman.

To fight the virus, Russia is taking steps to limit personal freedoms that in many ways mirror those taken recently by Western democracies. Schools, museums and theaters were closed nationwide, and gatherings of more than 50 people have been banned in Moscow and other cities. People arriving from breakout countries like Italy or China are required to enter quarantines.

But for Russia, those steps carry an additional significance: they are an opportunity for Mr. Putin to show an uneasy public the effectiveness of rigid top-down governance and of a strong, centralized state.

“A state of emergency is a happy time for any law enforcement authorities,” said Ekaterina Schulmann, a political commentator and former member of Mr. Putin’s human rights council. Referring to the stakes for the Kremlin as it navigates the crisis, she added: “On the one hand, you are viewed as a protector and a savior. On the other, you can become the focus of discontent.”

Mr. Putin’s grand bargain with Russians has been to provide stability, competent governance and greater respect on the world stage, at the cost of fewer democratic rights. The public’s support of the bargain has slipped in recent years amid declining incomes and anger over official corruption.

The coming weeks are shaping up to be critical for Mr. Putin as he tries to cement his power. A national vote to approve constitutional amendments that would allow him to serve as president until 2036 is scheduled for late April. For now, he has avoided much public blowback against the move to hold on to power, but the government’s ability to control the coronavirus outbreak will test his argument that Russia needs his steady leadership in a time of crisis.

Russia has reported a total of 147 officially confirmed coronavirus cases — a relatively low number that officials ascribe to aggressive quarantine efforts and the government’s early move in late January to close the border with China. But many Russians believe the total is far higher, and some are drawing comparisons to the 1986 Chernobyl nuclear disaster, when the Soviet government was slow to admit the scale of the problem.

“Everybody’s talking about, ‘Oh, it’s Chernobyl again,’” Anna Filippova, a 26-year-old freelance journalist, said in an interview at a Moscow bookstore. “We know the government’s going to lie again, and we’re not going to get any of the truth to come out, so we feel very lost, because maybe they’re underestimating it, maybe they’re overestimating — nobody knows.”

Mr. Putin mentioned the coronavirus last week in his surprise appearance at the lower house of Parliament to endorse a proposal to give him the ability to run for two additional six-year terms after his current tenure expires in 2024. The disease, he said, was one of the many current uncertainties that showed Russia needs the stability his leadership represents.

To fight the outbreak, the Russian authorities have been implementing their expanding surveillance tool kit — and showing it off to the public. On Tuesday, Mr. Putin toured Moscow’s coronavirus monitoring center, with Russian journalists in tow. The city’s mayor, Sergei Sobyanin, showed Mr. Putin how Moscow’s fast-expanding facial-recognition network allowed the authorities to catch people ignoring home-quarantine orders. The center also monitored social media for false information about the virus.

On Wednesday, Moscow’s top police official said that facial recognition cameras had identified more than 200 people breaking quarantine orders, according to the Tass state news agency. He said an additional 9,000 cameras are to be set up this year in addition to the 178,000 already operating. Russian civil rights activists have criticized the technology as a tool of the Kremlin’s expanding apparatus of repression, since it allows the police to identify and locate people participating in street protests.

What that means in practice has scared some Muscovites but comforted others.

Artyom, 30, who works in the media industry and requested his last name not be published, was of both minds.

He left his apartment building to take out the trash two days after receiving a quarantine order following a flight from Milan, he said in an interview. Two days later, police officers came to his house with an official police report and a printout showing his passport photo alongside his image taken by a surveillance camera.

“On the one hand, it’s concerning, because in the future, who knows how they could use it,” said Artyom, who now faces a court hearing and a fine, of Moscow’s facial-recognition technology. “On the other hand, if it can help them find real criminals, I think it’s a good thing.”

The Russian authorities, meanwhile, have signaled that the government’s virus-related crackdown could also affect freedom of expression. The Russian media regulator, Roskomnadzor, warned Wednesday that news outlets and websites that spread false information about the virus “will be subject to the harshest measures,” including having their licenses revoked.

Russian news outlets reported Tuesday that even tougher measures may be coming, including a lockdown and quarantine of Moscow. The city denied the reports. Russia largely closed its border to foreigners on Wednesday, its toughest travel restrictions since the fall of the Iron Curtain.

“For an authoritarian state, this coronavirus is paradise,” a Western diplomat in Moscow said, because the situation allows for the testing of tools of surveillance and control that can be used in the future to counter public unrest. “Next time you need it, just pull it out of the hat again.”

An uncontrolled outbreak of the epidemic, however, would undermine not only the public’s trust in Mr. Putin but also two key events on the Kremlin’s calendar: the April 22 plebiscite affirming Mr. Putin’s continued rule and the festivities planned for May 9 marking the 75th anniversary of the victory over Nazi Germany.

And the sharp decline in oil prices amid plummeting global demand has highlighted Russia’s economic vulnerability. Its currency, the ruble, fell more than 20 percent against the dollar in the last three weeks to its lowest level in four years.

“This famous Russian devil-may-care attitude is in this case absolutely inappropriate,” Mr. Putin said while visiting Crimea. “The utmost responsibility and discipline must be demonstrated.”

Elsewhere in the former Soviet Union, leaders have also implemented increasingly harsh methods to control the population. Kazakhstan — where the authorities put down protests against the authoritarian government last month — is deploying the police and the military to set up checkpoints and impose a quarantine on its two largest cities. A total of 37 coronavirus cases have been reported in the two cities, Almaty and the capital, Nur-Sultan.

In Ukraine, the government shut down subways and intercity rail, air and bus transport in addition to ordering restaurants and other establishments to close. A member of Parliament was among the country’s 16 confirmed coronavirus cases.

Ukraine’s president, Volodymyr Zelensky, justified the measures by pointing to the experiences of other countries. For now, he said, some freedoms would need to be put on hold.

“The experience of other countries shows that softness and liberality are allies of the coronavirus,” Mr. Zelensky said in a videotaped speech released Monday evening. “Therefore, we will take harsh, urgent and perhaps unpopular measures for the sake of the lives and health of Ukrainians.”