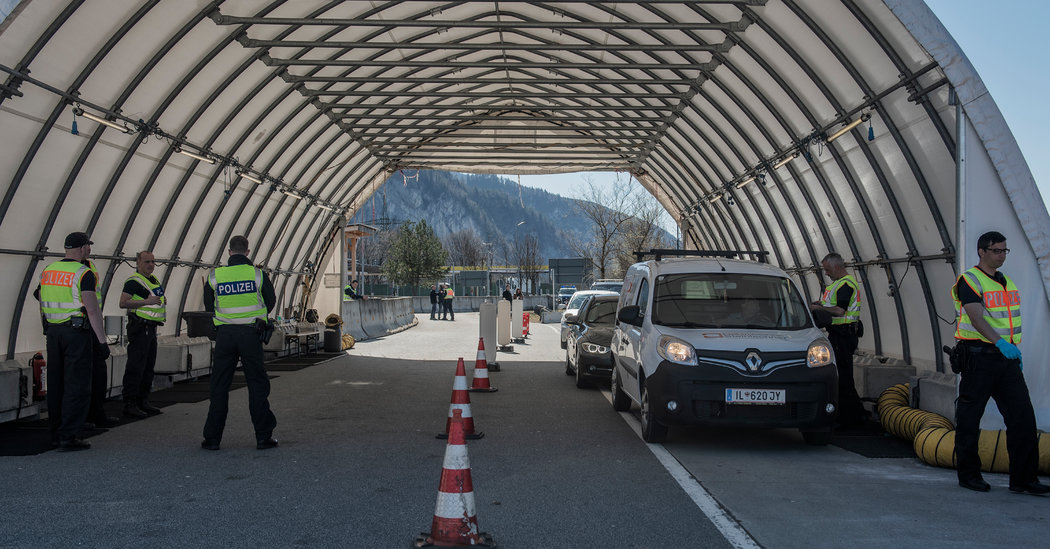 Drivers faced daylong waits to cross European borders that nations raced to close on Wednesday, years after proudly throwing them open. Britain closed schools to millions of children amid talk of shutting down London. And Germany’s stoic leader made an unusually personal appeal for unity and purpose in the face of crisis.

Across an increasingly locked-down Europe, people and their governments struggled to adjust to the grim, immobilized life wrought by the new coronavirus epidemic, their every adjustment seemingly a step behind the worsening reality.

The continent passed a bleak milestone that few envisioned last month, when the virus was ravaging China but had barely touched the West: As of Wednesday, by official government counts, it had infected and killed more people in Europe — more than 82,000 cases and more than 3,400 dead — than in China.

And as China slows the rate of new infections to almost zero, in Europe, now at the heart of the global outbreak, the virus is spreading faster than ever. Less than two months after the European Union sent relief supplies to China, the bloc announced that it was receiving badly needed masks and virus testing kits from China.

A day after she and other European Union leaders agreed to close the bloc off to almost all travelers, Chancellor Angela Merkel of Germany made a televised address on Wednesday, posing a stark choice to her nation: Abide by newly imposed restrictions on individual movement and contact with others to avoid spreading the virus, or watch the epidemic overwhelm the health care system.

The chancellor drew a striking parallel to her personal history. She lived more than half her life in the former East Germany, behind a wall, her movements constrained by the state.

“Let me assure you: For someone like me, for whom the freedom to travel and move was a hard-fought right, such restrictions can only be justified if they are an absolute necessity,” she said. “They should never be passed lightly and only ever temporarily — but they are indispensable at the moment to save lives.”

Reports of new cases and deaths in Europe accelerated on Wednesday. Among the countries with the biggest outbreaks, nearly all reported more new cases than they had in any single day before.

On a continent where people and commerce have crossed borders with little or no friction for a generation, the resurrection of border controls left drivers angry, goods stranded and traffic backed up for miles. Some supermarkets warned that they might not be able to keep shelves stocked.

Not only did the European Union authorize new controls on the bloc’s outer frontiers, but the free trade and free travel zone within Europe has broken down, with a dozen participating countries restoring old barriers.

The pledge that the movement of goods would not be interrupted appeared to be failing badly on Wednesday, especially in Hungary, the landlocked nation that has suddenly become a bottleneck in Europe. Prime Minister Viktor Orban carried out his promise on Monday to close the borders to all foreign citizens — leaving travelers stranded and fuming.

After many international airlines cut flights and the United States banned travel from most of Europe, plans were thrown into disarray and airports became scenes of panic and confusion.

A similar scene has been playing out for days on European roads.

Bulgarians, Romanians, Serbians and Ukrainians on either side of the main Austrian-Hungarian crossing have left their cars and sat in the road, preventing vehicles from passing in either direction in an effort to pressure the authorities to open the border.

Janos Fenyvesi, 68, a truck driver from Hungary, had been sitting in traffic on the Austrian side of the border since Tuesday afternoon. “We haven’t moved a single meter since 8 a.m.,” he said Wednesday.

Mr. Fenyvesi was pulling freight from Switzerland to Nyiregyhaza, in eastern Hungary, when his trip was brought to an abrupt stop about 16 miles from the Austrian-Hungarian border. Now, he said, a trip that would normally have taken him two to three days may take twice as long.

“I don’t understand why the Austrian police haven’t removed these people from the freeway,” he said.

In Austria, the police said that traffic had backed up more than 20 miles toward Vienna, hindering movement within the country. Slovakia, Hungary’s neighbor to the north, also reported traffic backups stretching for miles, a critical concern for a country that imports more than half of its food.

Slovaks working in Hungary were left with no sense of when they would be able to cross back home because of backups at the Hungary-Slovakia border.

And truckers trying to transport goods between Poland, which has imposed new border controls, and Germany were warned that they faced waits of four to 30 hours.

Britain has lagged behind its European counterparts both in restricting movement and in making the limits mandatory. But on Wednesday the government followed their lead and ordered schools to close, except for the children of essential workers, presenting a new challenge to millions of parents already struggling to hold onto their jobs.

There was also growing speculation about a strict lockdown in London, where the infection rate is relatively high, though government officials said they did not expect a decision until Friday at the earliest.

“We will take the right steps at the right time, guided by the science,” Prime Minister Boris Johnson said at a news conference. “We will not hesitate to go further and faster.”

He observed at least one other new precaution: His weekly audience with Queen Elizabeth II, normally conducted in person, was held over the phone.

As governments try to institute “social distancing” to avoid spreading the contagion, the combination of scary news coverage, stern advice, restrictions on personal movement and mandatory closings of businesses and gathering spots has already caused much economic activity to screech to a halt.

On Wednesday, Belgium joined Italy, France, Spain, Germany and others in ordering people to stay at home as much as possible. Belgians may go outside to walk, bike or exercise, but they must do it alone or with people who live in the same home, and stay away from others.

In France, the government proposed legislation allowing it to declare emergencies and govern by decree to some extent, including further restricting people’s movements and requisitioning goods and services from the private sector. Extending the emergency beyond 12 days would require the assent of Parliament.

The police in Paris said that in a raid on a store, they had seized more than 15,000 masks needed by health workers that were headed for the black market, and more than 200 bottles of fake anti-bacterial gel.

Grocers in France have been allowed to remain open, but Olivier Véran, the health minister, said the authorities would shut down open-air markets where people were not complying with distancing guidelines.

“Wherever it is impossible to enforce the distance of one meter between two people, we must intervene,” he said.

Europe’s disparate reactions echoed those of the migrant crisis of 2015 and 2016, when Ms. Merkel stood out for her welcoming attitude toward people fleeing war and deprivation.

Some populist leaders, notably Mr. Orban, portrayed Middle Eastern and African asylum seekers as a threat to European, Christian civilization, and tried to shut them out. Now they are linking the coronavirus to migration, and citing it as a reason to erect barriers.

Ms. Merkel seemed determined on Wednesday to appeal to empathy, civic spirit and reason, promising to communicate often and in detail about any further measures. She urged Germans not to believe “rumors, just official announcements.”

“We are a democracy,” Ms. Merkel said. “We don’t live by coercion but by shared knowledge and cooperation. This is a historic task, and we can only manage it together.”

The chancellor also warned against being overly sanguine.

“These aren’t abstract numbers in a statistic,” Ms. Merkel said. “They are a father or a grandfather, a mother or a grandmother, a partner. It’s people. And we are a community in which every life and every person counts.”