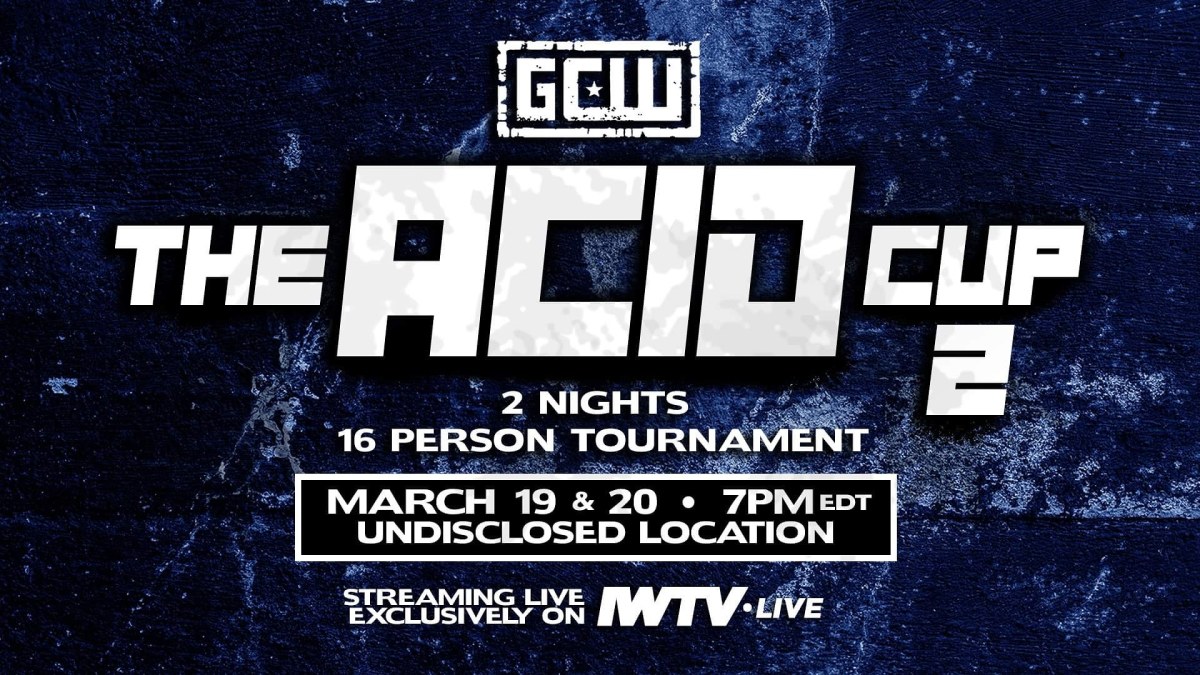 For wrestling fans with some additional free time on their hands, Game Changer Wrestling is launching a two-night tournament that begins Thursday.

Known as the “Acid Cup,” the 16-person single elimination tournament will stream live on IWTV.com at 7 p.m. ET on Thursday, as well as on Friday.

GCW owner Brett Lauderdale set up a fundraising page for the show, with all proceeds going directly to the wrestlers and referees working the event.

“GCW is not taking any of it, it’s all going to them,” said Lauderdale, who founded the promotion in 2015. “Everyone is being affected right now by the coronavirus, including all of our wrestlers. There is no GCW without the wrestlers, so we have to help the people that make GCW. We’re working together to provide some entertainment and create some work for people who are currently out of work.”

GCW recently announced it will live stream a minimum of 10 shows throughout the year on IWTV, and the “Acid Cup” can be viewed for free using the “gamechanger” promo code. The tournament includes a bevy of talented independent stars, including Nick Gage, Chris Dickinson, Allie Kat, and Matthew Justice. An added bonus for viewers is commentary from GCW staple and AEW star Joey Janela.

“We’re all wrestling people, wrestling is what we know,” said Lauderdale. “So as long as we can do wrestling in a responsible manner, then that’s what we’re going to do.”

GCW’s roots tie back to the first “Nick Gage Invitational” in September 2015, and the promotion took off following the success of the “Tournament of Survival” in June 2016. Known proudly as “The Last Outlaws” of pro wrestling, GCW runs a product that is equal parts guts and determination. The company has taken many risks before, and undoubtedly will again, but amid concerns about the coronavirus, Lauderdale ensured the show will meet every mandated protocol, including going as far as advertising the show from an “undisclosed location” to discourage fans from attending.

“Fans will figure out where we are soon as they watch, but it’s very important that people don’t show up,” said Lauderdale. “We’re following the guidelines of the city and the venue, and we’re only allowed 30 people. Our wrestlers will be on ring crew tonight. It’s essential staff and crew only, and we have to stick by that. We’re all going to look out for each other and be safe. If anyone is not feeling right, or anyone has any concerns, they’re going to sit this out.”

The “Acid Cup” is named after former wrestler Trent Acid, who died in 2010 at the age of only 29. Janela won the first “Acid Cup” tourney in 2016, and this year’s tournament includes wrestlers from across of the country. Manders and Benjamin Carter are making the trip from Iowa, while Allie Cat, Matthew Justice, and Atticus Cogar are coming from Ohio. Blake Christian (Tennessee), Shane Mercer (Kentucky), and Cole Radrick (Indiana) all personify the spirit of indie wrestling by making the drive to the show on short notice.

“If you’re unfamiliar with GCW, you’re going to see guys who live and breathe wrestling,” said Lauderdale. “This is the only thing they want to do. They live for wrestling. Our fans know the passion that sets GCW apart, and we are looking forward to showing new viewers what GCW is about.

“We provide a unique presentation, and you’re going to see a 16-man tournament of wrestlers doing what they do best, and that’s wrestle.”