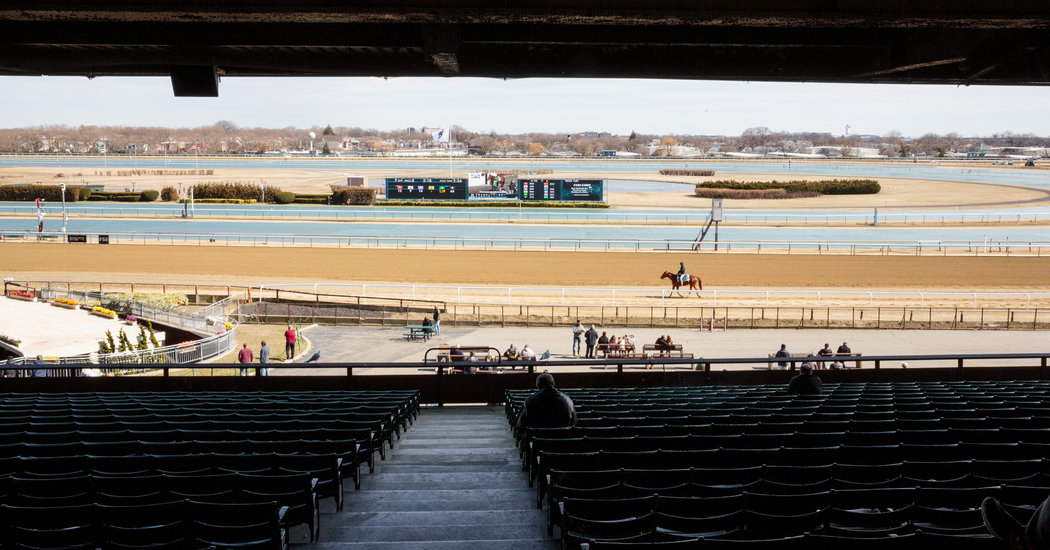 The New York Racing Association suspended horse racing at Aqueduct Racetrack this weekend after a worker who cared for the animals tested positive for the coronavirus on Thursday morning.

The association had hoped to conduct racing this weekend with no fans, as it did last weekend. The backstretch worker, who lives at Belmont Park, a track about 9 miles from Aqueduct, had been quarantined since Friday after showing symptoms of the virus. His roommate was quarantined as well, according to the association, which operates both tracks.

“This individual and his roommate have been in isolation since prior to racing last Friday and as such did not travel to Aqueduct for live racing,” Dave O’Rourke, the association’s chief executive, said in a statement. “We are working with the county and state departments of health to ensure proper quarantine and sterilization practices will continue to be followed moving forward.”

The association said it would decide later when to resume racing at Aqueduct. Belmont Park, where the worker lives, is out of season and not running races.

While the virus has transformed much of daily life in the United States, horse racing has continued without fans in the stands, the action primarily geared toward bettors placing wagers while isolated at home. Several major thoroughbred tracks, such as Santa Anita Park in California and Oaklawn Racing Casino Resort in Arkansas, plan to run full slates with four to 10 horses per race on Saturday and Sunday.

NBC Sports — which has been seeking live events to broadcast — plans to simulcast “Trackside Live,” the signature program of the horse racing network TVG, which jumps around to live races throughout the sport. On Saturday, the Louisiana Derby will be run at the fairgrounds in New Orleans.

The coronavirus is just the latest source of upheaval for a sport that has been rife with problems, including an alarming number of horses who sustain fatal injuries and a sweeping federal doping investigation. Still, the sport remains a multibillion-dollar industry and racetrack operators have tried to keep their doors open.

Nearly 600 people live in facilities on the backside of Belmont Park to take care of feeding, grooming and walking horses that would have needs whether they were racing or not. New York racing officials said previously that they had not significantly changed operations beyond restricting fans and visitors to the barns, under the guidance of state and federal authorities.