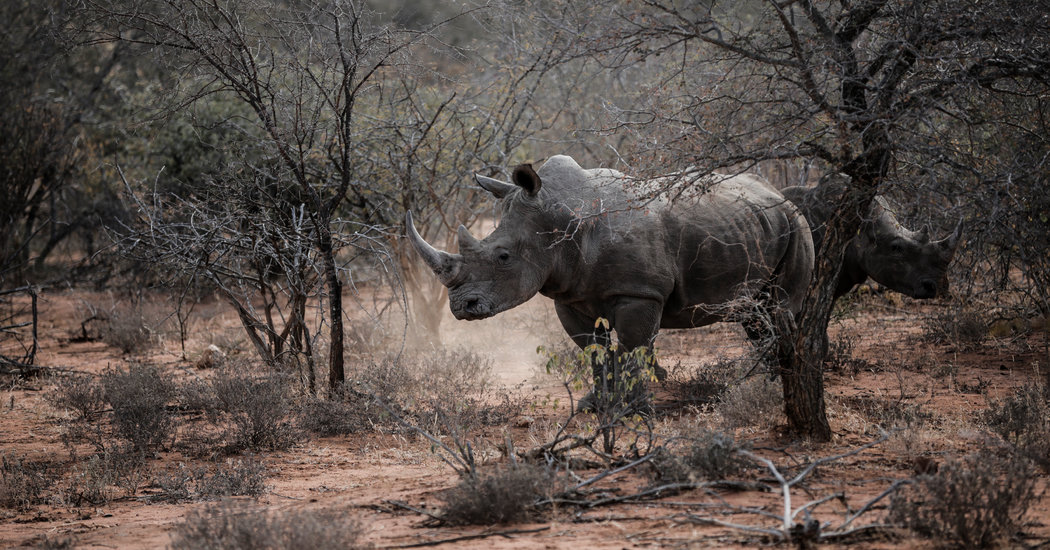 For years, the police detective had patrolled deep into South African parks and game reserves investigating rhinoceros poachers — including fellow police — in a country that is home to the vast majority of the world’s dwindling rhinoceros population.

The detective, Lt.-Col. Leroy Bruwer, had been well aware that the work was risky; he was assaulted and his car damaged two years ago in retaliation for testifying at a court hearing of a suspected poaching kingpin.

On Tuesday morning, Colonel Bruwer was driving to work when he was shot by gunmen with what appeared to be “heavy-caliber weapons” in the northeastern city of Mbombela, the South African police said. Colonel Bruwer, who was 49, died at the scene.

Police are now investigating the killing of the man known as “one of the best rhino cops ever,” a pivotal role in a key front in the global campaign to save the rhinoceros from extinction. South Africa, whose approximately 20,000 wild rhinos make up over 80 percent of the world’s remaining rhino population, is also the country most affected by rhino poaching, according to Save the Rhino, a British-based conservation group.

In the past decade, poachers have killed more than 8,880 African rhinos, the charity says.

South Africa’s national police commissioner condemned the killing of Colonel Bruwer, and promised a thorough investigation. Two men were taken in for questioning on Wednesday, according to a South African media report.

Colonel Bruwer, who was commander of an organized crime investigation unit in Mpumalanga Province, was decorated as the unit’s best detective in 2016 for his role in bringing to trial three police officers suspected of rhino poaching in 2014, who were later found guilty and dismissed from the service.

Mpumalanga, the province in which Colonel Brewer was shot, has been struggling to thwart both rhino poaching and the often violent hijacking of armored vehicles transporting cash, said Brig. Hangwani Mulaudzi, a spokesman for the priority crimes unit, in a telephone interview.

Testifying in the case in October 2018, Colonel Bruwer expressed fear for the lives of those on his investigating team after supporters of Mr. Mabuza who were demanding his release assaulted the detective. Colonel Bruwer’s car was damaged as well, but it is unclear by whom. The prosecutor in the case was also threatened, the newspaper Lowvelder reported.

Mr. Mabuza was first charged on six counts related to rhino poaching and released on bail in July 2018. He was later arrested again and released again on bail in January 2019. His trial is set to continue later this year.

Colonel Bruwer’s passion for wildlife began in childhood. His father worked for many years at Kruger National Park, the site of frequent poaching incidents, said Kobus van der Walt, who worked closely with Colonel Bruwer and is a lawyer with Mpumalanga Province’s asset forfeiture unit.

Poaching investigations would often take Colonel Bruwer and Mr. van der Walt back into the park to assess crime scenes, the lawyer said in a telephone interview on Thursday. On these trips the detective would recognize “small animals, plants and — just by hearing — a bird,” Mr. van der Walt said.

Colonel Bruwer also stood out because of the meticulous case files that he submitted to prosecutors, Mr. van der Walt said.

“They were neatly typed, in a specific font to make them presentable and easy to read,” he said. “There were no gaps in his dockets.”

Demand for rhinoceros horns spiked in the 1970s and 1980s because of their use in traditional Asian medicines and their status as a symbol of wealth, and conservationists have since fought to protect the animals.

The number of rhinoceroses killed for their horns in South Africa dropped to 594 in 2019 — down from the 769 killed the previous year. However, South Africa’s environment minister, Barbara Creecy, announced in February that wildlife trafficking is still “a highly sophisticated form of serious transnational organized crime that threatens national security.”

The animals’ habitats are also at risk because land is being rapidly cleared for housing, logging and agriculture.

“Rhinos remain under threat from organized crime syndicates as well as availability of suitable habitat in the long-term,” the World Wildlife Fund said last month.

Jamie Joseph, director of Saving the Wild, a South Africa-based environmental organization that helped in the investigation of Mr. Mabuza, called Colonel Bruwer “one of the best rhino cops ever” and said that his death left “a void that might never be filled.”

She said in an email on Thursday that she also feared for the safety of others who assisted in the case. “If I am not next in line to be assassinated, then it is someone in my team,” she said.

But Mr. van der Walt said the detective’s killing would only intensify their drive to catch and prosecute poachers.

Iliana Magra reported from London and Lynsey Chutel from Johannesburg.