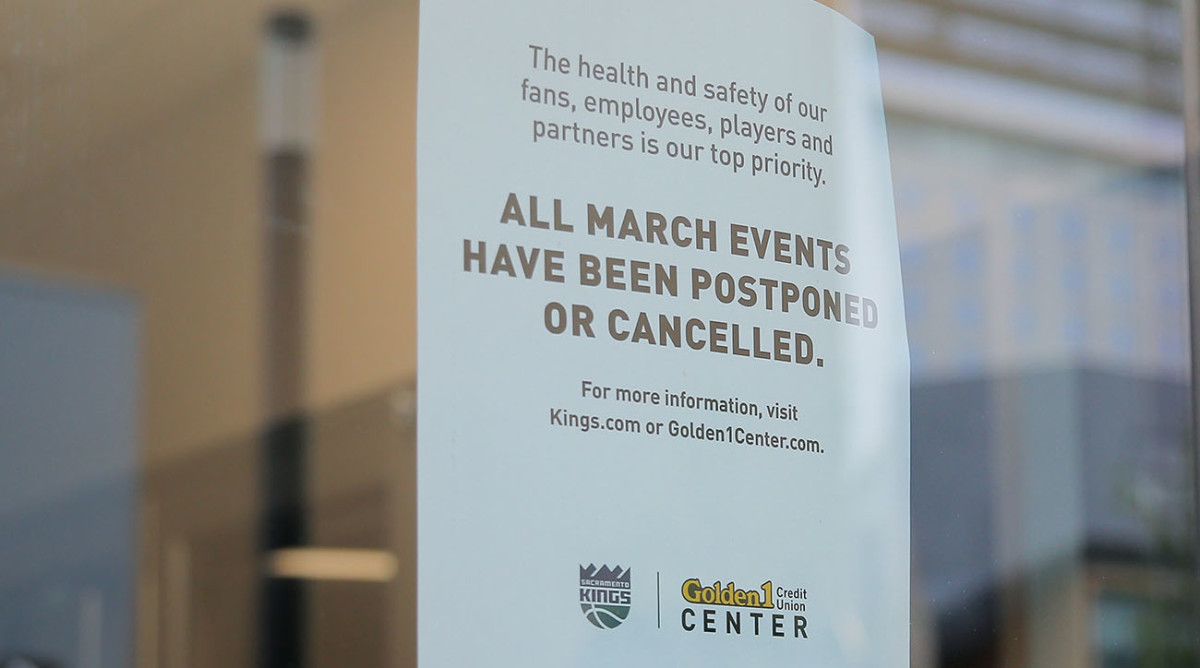 The sports world has ground to a halt as a result of the compounding COVID-19 pandemic, one that has now infected more than 200,000 people in at least 144 countries, with more than 8,000 deaths as of March 18. In the U.S., there are more than 7,000 confirmed cases across all 50 states, plus the District of Columbia and three U.S. territories. More than 100 Americans have died.

The NBA, MLB, NHL, MLS and the NCAA’s March Madness have each either suspended play indefinitely or canceled games altogether after Jazz center Rudy Gobert tested positive for the coronavirus on March 11.

Since then, Jazz teammate Donovan Mitchell and Pistons forward Christian Wood—who had defended Gobert on the block just one week prior—tested positive, too. Several other athletes have contracted the virus, including Kevin Durant (and three other Nets) and two Yankees minor leaguers.

Other leagues across the world have also suspended play. The English Premier League stopped play after Arsenal manager Mikel Arteta and Chelsea winger Callum Hudson-Odoi contracted COVID-19. The Champions League has also postponed play indefinitely, with the possibility that the remaining teams could play a one-off tournament over the course of a few days. There is a distinct possibility that both events could be canceled.

How the coronavirus affected the NBA on March 11 served, for many, as the wake-up call about how severe the growing outbreak—once a mere abstraction—really was. After a game between the Jazz and Thunder was abruptly delayed, it was reported that Gobert had tested positive. Minutes later, the NBA suspended play entirely. Soon, a number of leagues followed suit—and a number of other cultural institutions across the United States did too, including nearly every institution of higher learning, Broadway, museums, art galleries and more.

As it stands now, the NBA has said that it will remain suspended for at least 30 days. But the league has reportedly told owners to expect a delay until at least June or July—if play returns at all.

MLB canceled spring training and postponed the start of the regular season by two weeks one day after the NBA announced its plans. Since then, the league has said that it would adhere to CDC guidelines that suggest that public gatherings of more than 50 people be postponed for at least eight weeks, which leaves the league with a target start date of mid-May.

The NHL suspended play the same day MLB did. The league said in a statement Monday that it hopes to resume training in 45 days, though they, too, are adhering to the CDC’s 60-day guidelines against gatherings of more than 50 people. This would make a re-start in May the earliest possibility, with training camp taking place in late April.

The NCAA canceled the men’s and women’s tournaments altogether after initially aiming to play them without fans. This, NCAA president Mark Emmert said, was the only option after Gobert tested positive, which Emmert referred to as the “exclamation point” that forced them to act quickly. “It was like, ‘Yeah, this is real,'” Emmert told ESPN. The tournament accounts for approximately 75% of the NCAA’s yearly revenue.

Michigan, Ohio State, Notre Dame and countless other programs have postponed their spring practices, while recruiting everywhere has grinded to a halt. There’s no indication yet as to whether coronavirus concerns will affect the college football season.

After initially balking at idea of delaying play, Arteta and Hudson-Odoi’s diagnoses—and mounting public pressure—gave the FA no choice but to suspend Premier League play. Liverpool is leading the league by 25 points and would have been all but guaranteed to win the league for the first time in 30 years had play continued as normal. The league will be postponed until at least April 3, though it seems unlikely play will resume that quickly.

The Bundesliga, La Liga, Ligue 1 and Serie A also suspended play indefinitely, with no clear return date set. In the United States, Major League Soccer suspended its season for at least 30 days. Liga MX was slower to suspend operations, but after playing games this past weekend behind closed doors, the league went on hiatus—too slowly, according to SI’s Luis Miguel Echegary. Liga MX will consult Mexican health authorities before deciding when to return, the league said.

Every round of 16 tie has been suspended indefinitely. An idea that has been floating around UEFA, according to the BBC, is to play a one-off tournament in Istanbul and Gdansk, where the Final was due to be held. This will be discussed further on Tuesday, though there is no timetable as to when a final decision will be made on the matter.

UEFA, the federation that runs the Champions League, also postponed the 2020 European Championship, scheduled to be held across the continent this summer, to 2021 as a result of the growing outbreak.

Even as IOC officials and the prime minister of Japan are adamant that the 2020 Summer Olympics in Tokyo will continue as scheduled, doubt remains that it will be able to do so. The IOC on Tuesday said that it remains “fully committed” to hosting the event from July to August this summer. Also on Tuesday, a top Japanese Olympic official tested positive for COVID-19. President Trump has said he hoped the Olympics would be postponed, an idea that has been rebuffed by Japan’s Olympic minister. Expect a final decision by some time in May.

The Augusta National Golf Club announced Friday that they would postpone the Masters, which was set to tee off on April 9. The decree came a day after the PGA canceled the rest of the Players Championship and all play through at least April 5. It is the only time the tournament has been postponed or canceled besides during World War II. There is no indication yet as to when the tournament will be rescheduled.

The LPGA, meanwhile, postponed its first three majors of 2020: The ANA, the Volvik Founders Cup and the Kia Classic. The earliest it will return play is April 15 for the LOTTE Championship. Also, the USGA canceled its first two championship tournaments on Tuesday. The U.S. women’s amateur four-ball, originally scheduled for April 25 to 29 and May 23 to 27, will not be rescheduled. The earliest the tour will return is for the U.S. Women’s Open from June 4 to 7.

The NFL is out of season right now, but even so, coronavirus has affected the league’s procedural calendar. The league has postponed all training camp activity, much of which was to begin in April. The NFL also announced that its April draft would take place with no fans in attendance, with the league banning pre-draft visits as a result of coronavirus concerns. Steelers owner Art Rooney II said Wednesday that it’s “too early to tell” whether the pandemic will affect the NFL season.

The French Open announced Tuesday it was postponing the May tournament to late September. This comes a few days after the ATP, WTA and ITF suspended play for at least six weeks and Indian Wells—what some call the sport’s fifth major—was canceled. The big question is whether playing Wimbledon—set to begin June 29 at the All England Club—will still be feasible.

The preeminent horse racing competition will, like the French Open, be pushed to the fall. The race will now take place on Sept. 5. It’s the first time the event has been postponed since World War II.