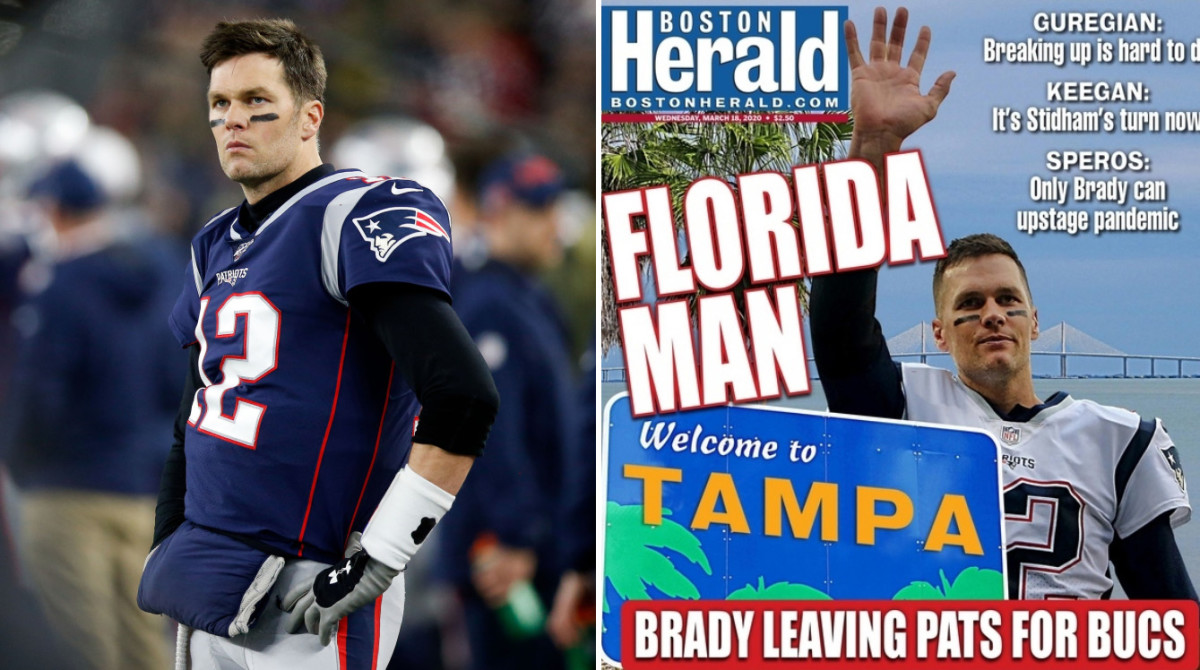 Even on a busy news day, newspapers across New England found room on their front pages for the shocking revelation that Tom Brady is leaving the Patriots for the Buccaneers.

After 20 years with the Pats, Brady dropped the bombshell yesterday morning that the rest of his his “football journey” would “take place elsewhere” and by sunset the news was out that Tampa was his destination.

Breaking up with the city of Boston on a St. Patrick’s Day where all the bars were closed due to a raging pandemic was a particularly cruel twist of the knife. The coronavirus has rightfully dominated headlines across the country but many papers in New England found room on their front pages for the Brady news.

Here is a selection of the best treatments. (All images from the amazing Newseum.)

In every case (except for the tabloid Boston Herald) the Brady news was surrounded by harrowing stories about the growing pandemic, which made for a totally surreal feeling.

It’s interesting to see how much space papers chose to give Brady compared to the real news of the day. The Portland Press Herald, Maine’s largest newspaper, barely had any mention of Brady on the front page, choosing instead to make the focus of the page a story about the coronavirus’s impact on small businesses. The region’s biggest paper, The Boston Globe, though, dedicated most of the left side of the front page to Brady, including a portion of Dan Shaughnessy’s column.

Tom Brady’s Patriots career ended in the same way so many others in New England did. … Here are seven options for the Patriots to replace Tom Brady. … As long as Bill Belichick is around, the Patriots can still be great. … Tom Brady wasn’t the only QB on the move yesterday.

The Iditarod—which has its roots in an epidemic—is the only sporting event going on in North America right now. … ESPN’s 10-part Michael Jordan documentary won’t be released early because it’s not finished. … A Mets prospect hoping to get some work in drove up to a random field and played catch with an amateur player. … Tony Kornheiser wants PTI to come back as a sports history show. … Here’s an awesome story about Joel Embiid lobbying the Cavs to draft him during a pre-draft workout.

Here’s what Bill O’Brien’s colleagues think of him

I enjoyed this Roger Maris story from Peter Gammons

Golf in the time of coronavirus

Those rock formations are blowing my mind

Inside New York City bars before they all got shut down. … A Florida man is accused of stealing $3,000 from a woman he met on a dating app.

Things are already getting weird in New York