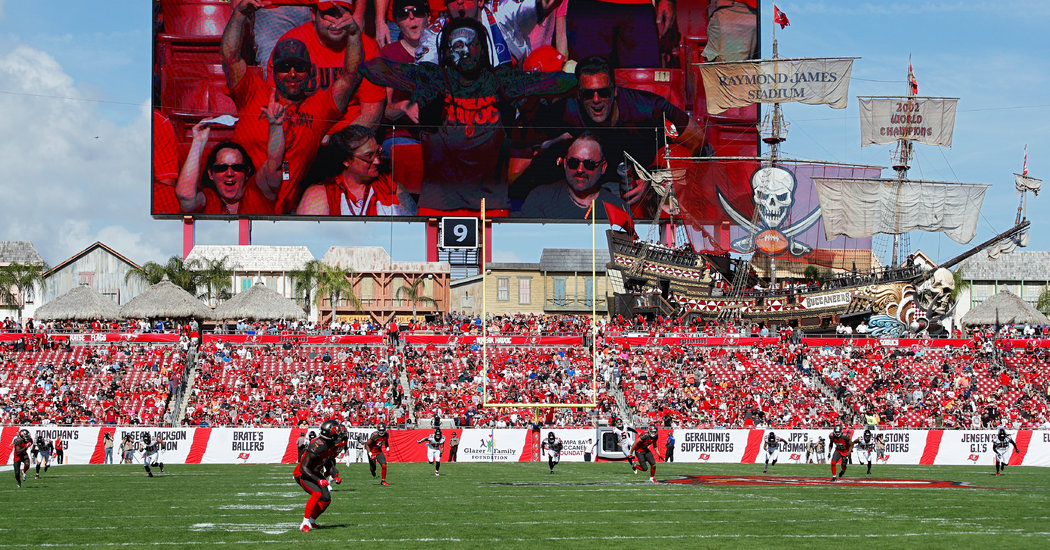 The Tampa Bay Buccaneers played one night game last season, on a Thursday in Week 2.

The limit for prime-time appearances per team is six, but with Tom Brady poised to join the Buccaneers’ pirate ship — maybe they’ll let him control the animated parrot resting on its stern? — perhaps that number will swell to 16.

Brady has upended the N.F.L. landscape by fleeing the most successful franchise of the modern era for one of the least, and could inject credibility and visibility into a team that hasn’t made the playoffs since the 2007 season. In that span, Tampa Bay has finished as high as second in the N.F.C. South only twice.

In 13 of his 18 seasons as New England’s starting quarterback, Brady played in the A.F.C. championship game, including a staggering eight straight appearances from 2011 to 2018. Put another way, Brady was more likely to play in that game than to complete a pass.

He has reportedly changed conferences, at a time when three of the league’s young quarterbacking stars — Lamar Jackson, Patrick Mahomes and Deshaun Watson — seem primed to control the A.F.C. Brady appears to be exiting an A.F.C. East that New England has ruled just as the Buffalo Bills, in particular, are ascending.

He has switched coaches, presumably leaving behind Bill Belichick, whose public mien evoked someone confined to a middle seat on a trans-Atlantic flight, for Bruce Arians, an offensive mastermind who favors Kangol hats and sunglasses, expletives and wisecracks. Arians also tutored Ben Roethlisberger in Pittsburgh and Peyton Manning in Indianapolis, where two other Tampa Bay assistants — quarterbacks coach Clyde Christensen and Tom Moore, a consultant — also worked.

Frustrated by the relative lack of offensive talent around him last season, Brady is expected to now throw to Mike Evans and the speedy Chris Godwin, two 1,000-yard receivers last season who are both over six feet tall. Not since Randy Moss stretched the field for New England more than a decade ago has Brady collaborated with a receiver as fast, physical and powerful as Evans.

The Buccaneers led the N.F.L. in passing last season, though it seems unlikely that they will again. To account for Brady’s comfort exploiting underneath routes and the middle of the field, Tampa Bay could certainly tweak its explosive downfield style that, with Jameis Winston at quarterback, was at once thrilling and reckless. Brady has thrown 36 interceptions over the last five years — six fewer than Winston did just last season.

Brady may be entering a favorable situation, surrounded by shrewd coaches, loads of offensive skill, a stout defense (and no state income tax).

But he is still venturing into an uncertain stage, with no assurance that he will play well next season, when he will be 43. The Buccaneers’ schedule is full of enticing matchups, with Drew Brees, Patrick Mahomes, Aaron Rodgers and Matt Ryan all slated to visit (pencil in at least two of those for Sunday or Monday night).

This is all new, with no blueprint for how this next phase of his career unfolds, no analogue for a 42-year-old quarterbacking legend who leaves to become another team’s starter.

Brady grew up in Northern California rooting for the San Francisco 49ers and Joe Montana, who played his final two seasons in Kansas City and revived its fan base, leading the Chiefs to an A.F.C. championship game but not beyond that. From Johnny Unitas to Brett Favre, Joe Namath to Peyton Manning, so many great quarterbacks have finished their careers in unfamiliar uniforms, enjoying varying degrees of success. None were as old as Brady is now.

All around Brady, contemporaries are either assessing their football mortality, like Brees and Philip Rivers, or retiring, as did Brady’s primary Super Bowl tormentor, Eli Manning. According to Pro Football Reference’s play index, only six other quarterbacks have attempted even one pass after turning 42. Combined, those quarterbacks — George Blanda, Steve DeBerg, Doug Flutie, Warren Moon, Earl Morrall and Vinny Testaverde — threw for 29 touchdown passes at 42 or older. Brady threw 24 last season. Only Moon, in 1998 with Seattle, tossed as many as 11.

Only the most devout football fans might recall where Moon’s brilliant career ended — with Kansas City.

Brady has to believe that, by bolting New England, he is giving himself a better chance to do what has never been done before: win a Super Bowl as a 43-year-old starting quarterback.

Buccaneers fans must believe it, too, or must at least be curious about how close Brady can come. After Tampa Bay ranked 30th in attendance in the 32-team league last season, potential season-ticket buyers have flooded the team’s website, waiting behind upward of 5,000 other customers, according to ESPN.

And hey, look, it just so happens that Super Bowl LV will be held in Raymond James Stadium, in Tampa, Fla, Brady’s purported new home.