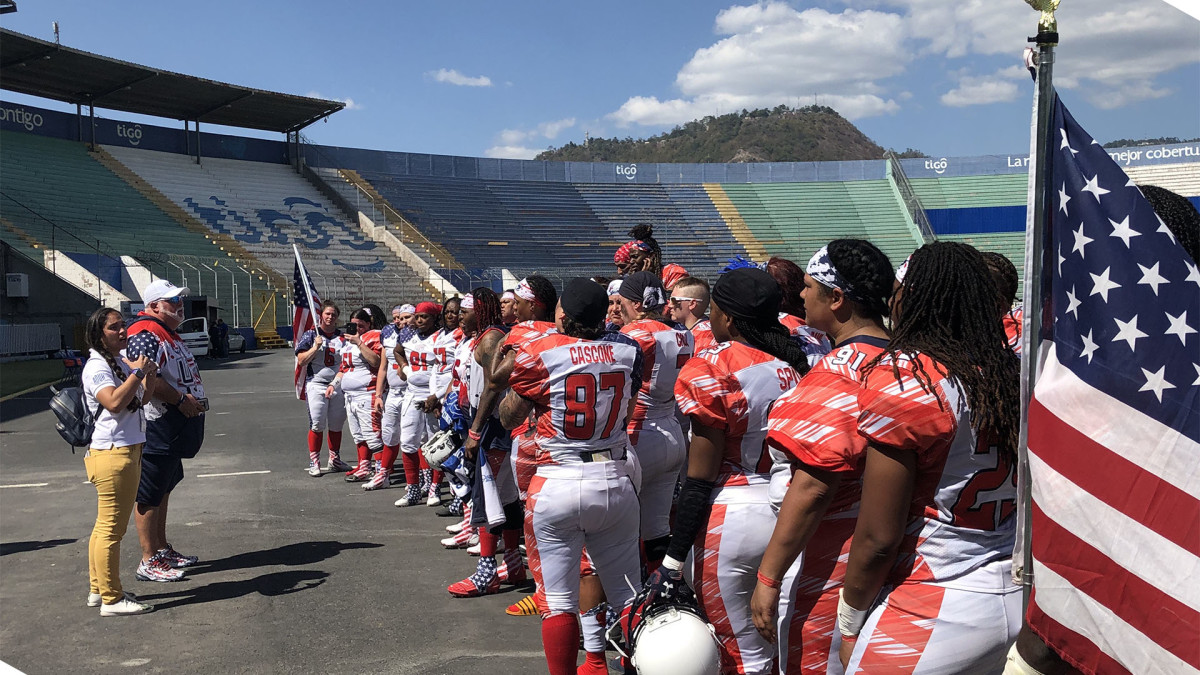 If you need a reminder of how quickly things have changed as the coronavirus has spread across the globe, Stephanie Balochko can tell you a story.

Last Wednesday morning March 11, before the NBA suspended its season or the United States implemented travel restrictions from Europe, and several days before bars and restaurants across America began to close, Balochko and more than 50 players and coaches on an all-star football team boarded flights bound for Tegucigalpa, Honduras. They were traveling to compete in the Americas Women’s Bowl, an international football tournament between teams from the U.S., Mexico, Costa Rica and Honduras.

They were supposed to return home five days later, on flights departing around noon on Monday. But on Sunday night around 7, they got word that the Honduran government had decided to close its borders at 11:59 p.m., for the next seven days, to limit the spread of the virus. The main commercial airlines that shuttle visitors to and from Honduras did not have planes on the ground when the announcement was made, Balochko says. Fifty-five people in their group are now stuck in Honduras.

“We are figuring we are here for the seven days, and then we don’t know what is going to happen after that,” Balochko said over the phone from the hotel in Tegucigalpa where the team is staying. “Will it be longer? Or on the seventh day, will the U.S. be shut down? It’s escalated so quickly, and it’s changing every day.”

Think about what you were doing last Wednesday morning—taking your kids to school? going to the gym?—and that puts into perspective how much has changed since Balochko and the rest of the team left their homes. The 45-year-old, a firefighter and paramedic from Ohio, is the linebackers coach for the women’s USA All-Star team run by the American Football Events nonprofit. The players and coaches on the team represent professional women’s teams in 15 states across the U.S. Among the team are a teacher, nurse, NYPD officer, correction officer and active and retired military. There are several moms in the group.

The day after arriving, last Thursday, the team made a visit to a local school that provides scholarships to local kids so they can learn English. Many of the players traveled to Honduras with checked bags carrying items to donate—brand-new underwear and socks, gently used clothing, coloring books and toys—which they distributed at both the school and a nearby homeless shelter for teens. On Friday, the team played its first two games, winning both. At halftime of their third game, on Saturday, things began to change. Teams were told that the Honduran government had started to restrict gatherings and public events due to COVID-19. They were permitted to finish that game (another victory) but the tournament final on Sunday was canceled. Then, Sunday night, they learned about the border shutdown.

Sandy Glossenger, the operations manager for the AFE team said she and her husband, Dale, the organization’s president, have been in touch with contacts at the U.S. Embassy in Honduras, who have made sure the team is safe. On Tuesday evening, Glossenger shared with the team the latest message she had received back: “Everyone at the Embassy is doing everything possible to find solutions for American citizens grounded in Honduras. You are definitely not forgotten.” The football team has since heard from other Americans stuck in Honduras, and someone has even started a Facebook group. But Glossenger was also told by one of her Embassy contacts that they do not have a budget allotted for taking Americans out of countries when borders close down. When she called on Wednesday morning, she was stuck on hold and could not get through. For now, the group is preparing to stay in Honduras for the full seven days—or maybe longer.

“It’s not just us, but we are probably the biggest group of American citizens stuck here at the moment,” says Glossenger. “It’s been a solid three days of sending emails and making phone calls, going down every single avenue. All of us want to get back to our families in the U.S.”

The hotel the U.S. team is staying in has been able to stay open because some members of the hotel staff live on site. Stranded members of the Costa Rican and Mexican teams have not been so lucky, though, and have had to relocate multiple times. The team has also had a police presence outside their hotel since they arrived to compete in the tournament. “We have protection, and we are safe,” says Balochko.

But the unexpected extended stay has been a strain for many team members, some of whom are single parents or live paycheck to paycheck. They paid a flat fee to travel and participate in this tournament, not expecting to stay abroad for an extra week. The team negotiated discounted rates for lodging, food and laundry (instead of paying $7 to wash one shirt, they are now paying by the pound). They have been helping the limited hotel staff with some housekeeping tasks and have packed multiple players into each room—two to three linemen, and as many as four skill position players (they’re smaller). The team has also been collecting donations to ensure they can afford to stay at the hotel for as long as they are stranded.

There are also medical concerns: One of the team’s coaches is an insulin-dependent diabetic. Glossenger and a local liaison for the team went out with a police escort on Tuesday in search of insulin and other essentials like cholesterol medicine for team members. Many pharmacies are closed, and since people have been hoarding supplies, they had to make three or four stops before they were able to locate an eight-day supply of insulin. Luckily, Glossenger said, a prescription is not needed to buy insulin in Honduras.

To pass the time, the group of 55 has been playing board games and watching movies, and one of the fitness instructors on the team is leading CrossFit classes. Since the players come from all different skill and experience levels, the coaching staff led a film session on Tuesday to explain different techniques for breaking down game tape. Balochko has plenty of experience—in addition to being a coach for the women’s national team and two professional women’s clubs, she’s spent the last four years as a training camp coaching intern with the Steelers, working with the defensive line. One of the purposes of the team’s trip was to continue growing the game they love abroad.

“If we could interact with the Honduran team, I think we would be sitting here with them teaching them our game,” Balochko said.

Instead, when circumstances changed, the Honduran team sent a delivery of bottled water and snacks to the U.S. team’s hotel. So far, there have been six cases of coronavirus in Honduras, and the U.S. players and coaches have stayed self-contained in their hotel. They have been keeping up with the news at home by watching CNN, the only English-speaking news channel on the hotel TVs, and those with international cellphone plans have been sharing so everyone can talk to loved ones. Drawing on her paramedic training, Balochko reminded the players in her linebacker position group that they can come to her if they are anxious or having a panic attack.

“We’ve been making the best of it and keeping everybody pretty upbeat,” Balochko says. “Give it a few more days, and people will probably start getting a little down.”

To look too far forward or back right now, however, is disorienting, considering how much has changed since these 55 players and coaches departed from the U.S. one week ago. So this football team, stranded in Honduras during a pandemic, is abiding by the old cliché in sports, and taking it one day at a time.