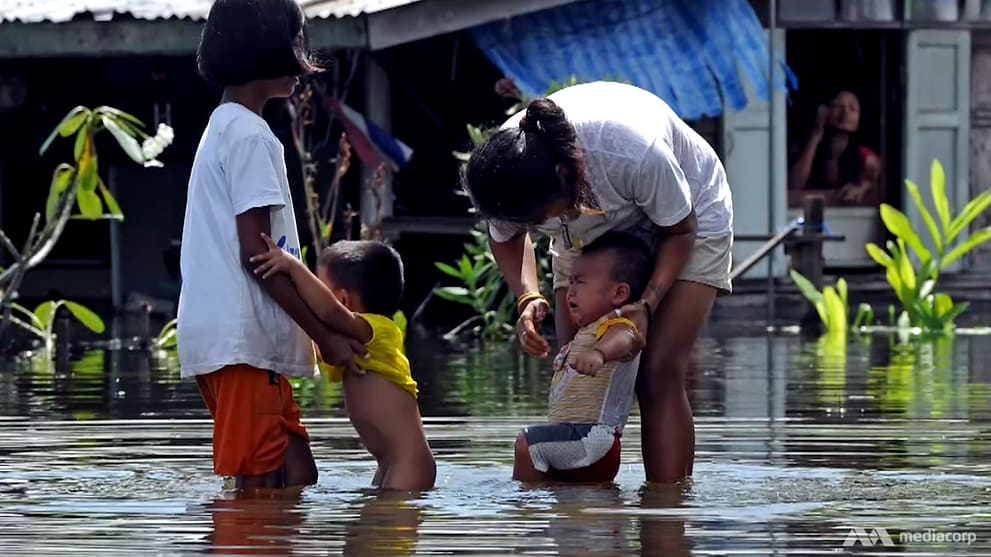 BANGKOK: When landscape architect Kotchakorn Voraakhom and her landscape design studio, Landprocess, created a park in central Bangkok in 2017, it was no ordinary park.

It was a green basin to help the city soak up excess water — up to 4.5 million litres — by funnelling water into underground tanks, for example, and thus reduce monsoon flooding.

“This is part of the solution that can be replicated … within the city. That (is), we need more space to hold the water.”

Such solutions are needed because Bangkok is buckling under the weight of urban development, with its buildings putting downward pressure on the land.

And nearly 40 per cent of this low-lying city may be flooded each year by 2030 owing to extreme rainfall and changes in weather patterns, according to the World Bank.

But as the programme Insight discovers, there are ways to stop this tourist haven from sinking, and protect it against the rising tide. (Watch the episode here.)

The Thai capital, with a population of about 10 million, sits in the Chao Phraya river delta and is caught between the rising sea level — four millimetres a year — and land subsidence of up to two centimetres a year.

READ: Why Manila is at risk of becoming an underwater city

READ: Why Jakarta is the fastest sinking city in the world

Bangkok’s chief resilience officer, Supachai Tantikom, explained that the soil underlying the city generally consists of alternating layers of soft clay and sand. “We don’t have any rock layers. And there are a lot of aquifers,” he said.

“In the past, we used a lot of underground water … so this has caused land subsidence.”

Frequent flooding resulting in part from climate change has worsened the situation.

Just an hour south of Bangkok, the once-thriving fishing village of Samut Chin has already had to move inland several times over the years, owing to coastal erosion and rising sea levels.

Village head Wisanu Kengsamut said that despite repeated calls to the government to address the problem, nothing much had been done. “Regarding the coastal erosion problems, the government agencies provided very little help in the past,” complained the 37-year-old.

“Even now, we don’t receive any significant assistance from them on these issues. Our community faces the severest problem of coastal erosion in Thailand.”

Some residents in the country have felt that the government has not done enough to tackle the problems of flooding since 2011, when Thailand’s worst floods in half a century resulted in more than 800 deaths nationwide.

In the capital, floodwaters inundated parts of the city for almost three months. The severity of the situation caught many residents — and the authorities — off guard.

Somsak Meeudomsak, deputy director-general of Bangkok’s Department of Drainage and Sewerage, said the drainage systems in the provinces were not adequate. “In Bangkok … our water management system was also not good enough compared to now,” he added.

The problems facing Bangkok have set some people, including Kotchakorn, thinking how best to resolve them.

The city used to be known as the Venice of the East because of its canals, but many of these have been paved over because of urban growth. The rainwater they channelled has nowhere to go now.

“We (weren’t) concerned about our natural waterways … (and) how the water would drain,” said Kotchakorn, who is also the chief executive officer of social enterprise Porous City Network.

“We have so many dams upstream, and that’s preventing us (Bangkok) from having sediments … With less sediments (in the delta), the land can’t grow.”

The 39-year-old also believes that rapid urbanisation has swallowed up the city’s greenery, leading to a temperature rise.

“Rapid growth without … really planning to have enough green spaces or natural elements in the city (has) cost so much in terms of the pollution and the well-being of people,” she said.

She is pushing for more sustainable development solutions to combat climate change, including re-introducing nature into the city.

For example, the Centenary Park serves as a kaem ling (monkey cheek) water-retention area for the community, like how a monkey holds food in its cheeks until it needs to eat.

Under normal conditions, water that is not absorbed by plants flows into the park’s storage system, where it is stored for watering during dry periods. When floods hit, the containers hold water and release it after the flooding has subsided.

Combating floods through design is just one of the many functions of Kotchakorn’s designs.

With buildings crowding the streets, she has also turned to underutilised spaces to introduce nature by, for example, creating Asia’s biggest rooftop farm at Thammasat University.

The 7,000 square metre space mimics rice terraces and can help to curb some of the impact of climate change, she said.

Prinya Thaewanarumitkul, the university’s vice-rector for sustainability and administration, noted that buildings with a green roof will consume less air conditioning.

“We need (this) green roof to reduce the use of energy (and) reduce the release of carbon dioxide into the atmosphere,” he said.

The trial house in nearby Ayutthaya, a province grappling with floods, has steel pontoons filled with styrofoam, which can lift the house off the ground if floods occur.

The government has taken other steps to ensure that homes are flood-proof and that the calamity of 2011 does not recur.

These flood prevention initiatives include the dredging of canals, improving Bangkok’s drainage systems and increasing the height of a 77-km flood wall along the Chao Phraya River.

The Bangkok Metropolitan Administration (BMA) has also been building underground “water banks”, or large artesian wells, to retain rainwater during heavy downpours. Inspired by a similar project in Japan, these wells will be connected with pipes and gutters to receive floodwater.

The BMA also launched a programme to replant mangrove forests, with the target of restoring almost 65 hectares of coastline.

Kotchakorn, however, feels that the city has a long way to go in resolving its flood problems and rising water levels — and that research has not necessarily translated into action.

“We have to be more action-oriented, rather than just keeping all this research on climate change on the shelf. So the policymakers or the community have to come together,” she said.

“There’s so much work to be done … And we need to act faster.”

Watch this episode here. The programme Insight is telecast on Thursdays at 9pm.