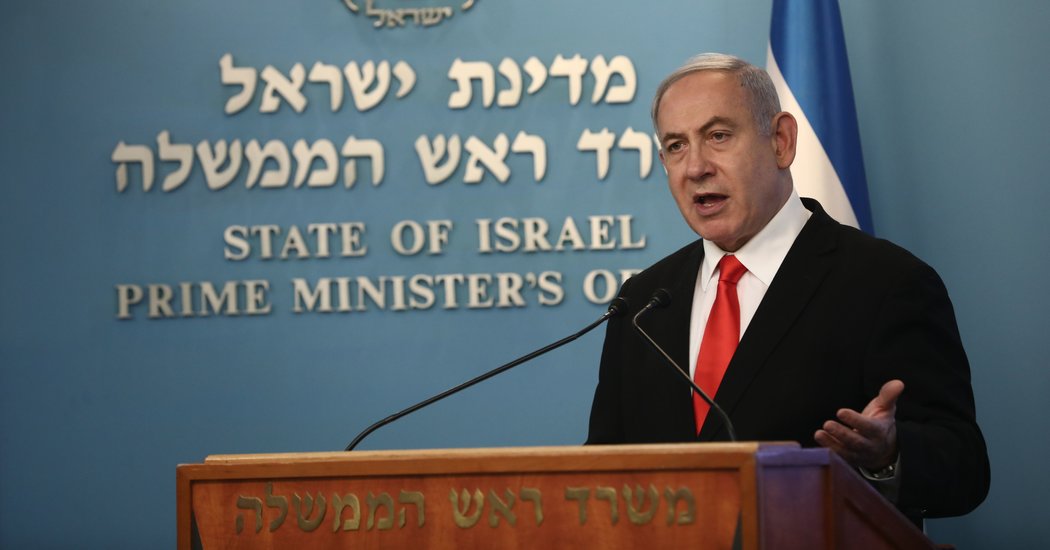 JERUSALEM — Prime Minister Benjamin Netanyahu was supposed to be facing trial this week on bribery, fraud and breach of trust charges.

Instead, he was shutting down the courts and ordering Israel’s internal security service to identify people who should be quarantined using data harvested from their phones.

Both of those extraordinary moves, announced in the dead of night on Sunday and Tuesday, were made in the name of combating the coronavirus. The court shutdown also had the effect of delaying Mr. Netanyahu’s corruption trial by two months.

Many Israelis have expressed admiration for the celerity and aggressiveness of Mr. Netanyahu’s response to the pandemic: Israel was ahead of the curve in shutting down travel to hot spots, ordering new arrivals into quarantine and closing down the public schools.

But others are asking whether Mr. Netanyahu, who is battling to keep his job after three inconclusive elections, is exploiting the health crisis for self-serving ends. And whether, as he moves to protect the nation’s health, he may also be endangering its democracy.

Mr. Netanyahu insisted he was protecting the nation while adhering to democratic values, noting that the court shutdown was temporary and that he had received the permission of the attorney general for the cellphone data usage, which was valid for 14 days.

“Israel is a democracy,” he said Monday. “We have to maintain the balance between the rights of the individual and needs of general society, and we are doing that.”

But critics questioned whether closing the courts was a necessary response to the coronavirus and if the infringements on privacy by monitoring cellphones could have long-term consequences.

“Democracies don’t die in one day,” said Susie Navot, a professor of parliamentary and constitutional law at the Striks School of Law, in Rishon Letzion, Israel. “As you see in Europe, they can decline or erode, bit by bit, and you don’t really feel it.”

“It’s like a smoke bomb,” she said. “You don’t see very clearly, and then things change quickly, without you taking notice.”

All over, democratic nations are struggling to act quickly enough to contend with the fast-moving biological threat. Israel is blessed with some important advantages over places that have responded more haltingly.

Its people have a history of improvising, rallying and uniting in times of crisis, and are used to defending against threats that hit close to home. The government enjoys expansive emergency powers, dating back to the British Mandate, that allow it to do pretty much anything it deems necessary.

Its Internal Security Agency possesses a huge database, The New York Times reported Monday, of records from cellphone companies, dating back to 2002, allowing almost any individual’s footsteps to be retraced. And the agency, known by its Hebrew acronym as the Shin Bet, enjoys the confidence of the public that it will act in the best interests of the people and of democracy.

That sets Israel apart from countries whose secret police have dark histories as agents of repression, and even from the United States, where Edward Snowden’s revelations that the government was collecting Americans’ bulk cellphone data led to the practice being outlawed.

Israelis trust the Shin Bet to protect them and not to abuse that trust, said Yohanan Plesner, president of the Israel Democracy Institute. “If the Shin Bet is to infringe on our basic privacy, they could have done it many years ago,” he said.

Medical professionals were generally supportive of the use of the technology.

Ran Sa’ar, chief executive of Maccabi Health, Israel’s second-largest health fund, praised it, citing the Talmudic teaching that saving a life overrides the laws of the Sabbath. In extreme circumstances, he said, that principle “trumps all things sacred, including people’s privacy.”

The United States was reported to be considering a similar plan on Tuesday. Government officials were talking with Facebook, Google and other tech companies, The Washington Post reported, about using cellphone data to track whether people are keeping at safe distances from each other.

But Professor Nadav Davidovich, head of the public health school at Ben-Gurion University of the Negev, said that the government was making a risky bet on a fix that might not live up to its billing, when it should focus on testing for the virus.

“It’s very tempting to go to some quick technological solution that looks very high-techy, instead of investing in other areas that are more important, considering the price of losing the trust of the people,” he said.

Mr. Netanyahu’s main political rival, Benny Gantz, a former army chief heading the centrist Blue and White party, did not object to using the database but to Mr. Netanyahu’s reliance on emergency regulations to order it instead of waiting for parliamentary approval.

“These are exceptional times that, unfortunately, call for exceptional measures in order to save lives,” Mr. Gantz said Tuesday. “That said, we cannot surrender transparency and oversight.”

Civil rights groups and the Joint List of predominantly Arab parties, the third-largest slate in Parliament, said they would petition the Supreme Court to overturn the government decision on privacy grounds.

Mr. Netanyahu responded to his critics by warning that “a delay of even one hour in employing these digital tools could lead to the death of very many Israelis, just as is happening in Italy and other places in the world where thousands are dying.”

Practical questions remain about the workability of using the Shin Bet’s data to track down and quarantine people whose cellphone records indicate they were near someone carrying the virus.

The agency has said nothing that would give away its secrets, but experts warn that data taken from cellular towers lacks precision and could force many people into quarantine who did not actually come close enough to people carrying the virus for them to be infected.

Officials insist that the agency’s help will, at any rate, retrace virus carriers’ footsteps more comprehensively than is possible through interviews that rely on memory and candor.

The Shin Bet chief, Nadav Argaman, said in a rare statement on Tuesday that it was responding to a request from professionals at the Ministry of Health and would use its capabilities solely to save lives. The attorney general, Avichai Mandelblit, also pledged that the powers would be used sparingly.

Those concerns aside, in the eyes of his critics, Mr. Netanyahu’s legal and political predicament colors every move he makes and raises questions about his motives.

He was narrowly defeated in elections on March 2 by lawmakers seeking his ouster. Their leader, Mr. Gantz, was entrusted on Monday with the task of forming a government.

But Mr. Netanyahu, who leads a caretaker government until a new one is formed, is doing his utmost to prevent him. His critics accuse him of exploiting the current political vacuum under the cover of the epidemic to concentrate power in his own hands.

Mr. Netanyahu had already attacked other democratic institutions. Battling to stay out of court and to rally his base, he has assailed the judiciary and the news media, eroding trust in those institutions.

Now, with the country split between a left and center that deeply distrust Mr. Netanyahu and a right wing with little faith in the media or the courts, Israeli democracy is being stretched toward the breaking point.

“We are heading into a constitutional crisis,” said Shlomo Avineri, professor emeritus of political science at Hebrew University, adding that Israel was now being run by a “very presidential-like government.”

Mr. Netanyahu has, on top of all else, appeared nightly on television to dole out health advice and increasingly stringent instructions in a “father of the nation” role that Mr. Avineri said had clearly bolstered his status.

“Crisis either brings down rulers or strengthens them,” Mr. Avineri said. For now, he said, “It has strengthened Netanyahu, because the agenda is about the coronavirus, and not his trial for corruption.”