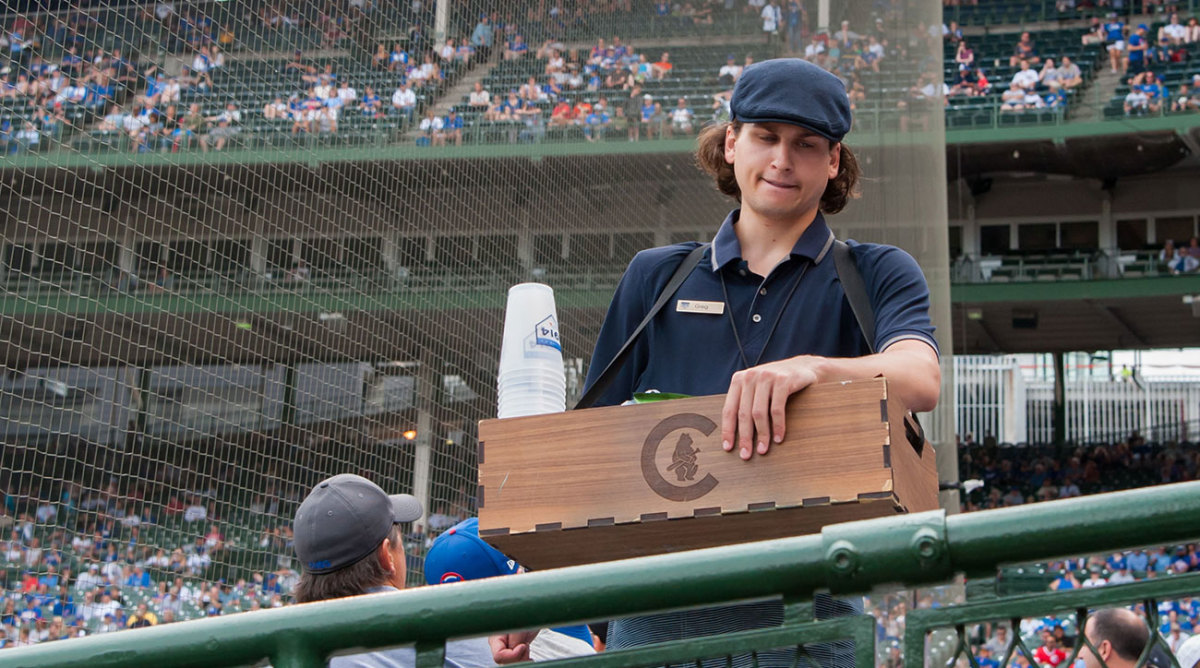 Mark doesn’t entirely remember the moment his world fell apart. Shortly before the first game of the Big 10 men’s basketball tournament, the walking beer vendor was stocking his tub at Bankers Life Fieldhouse in Indianapolis, when he heard that the coronavirus’s spread had ended spectator sports for the foreseeable future.

The public-address announcer delivered the bulletin, or maybe it was the employee intercom. The doors were still closed, or maybe fans were streaming into the arena.

“It’s fuzzy,” says Mark, who asked to be identified only by his first name because he has been asked not to speak to the press. “I was so scared of what was going on.”

And who could blame him? The Centers for Disease Control and Prevention estimate that COVID-19, the disease the coronavirus causes, could infect up to 214 million people in the U.S. and kill as many as 1.7 million. People are infectious for days before they start displaying symptoms such as a fever and a dry cough. And the virus spreads quickly and easily: A handshake can transmit it. A sneeze. A breath. On a good night, Mark can brush hands with more than 100 people as he takes their money and hands them beer and rubs shoulders with hundreds more as he makes his way through the stands. He is as good a candidate to catch the virus as anyone.

No, Mark says. He wasn’t scared of catching COVID-19. The conference had decided to close the tournament to fans (which, of course, is as good as canceled for a beer vendor) before ultimately shuttering entirely. “I was scared of losing my work,” he says. “It’s my livelihood.”

It’s easy to think that the shuttering of every major American sporting event impacts two groups: the athletes and the fans. But the industry employs thousands of other people, most of them making minimum wage or below and suddenly staring at weeks without pay.

But those pledges are expected to cover only people employed by the teams and stadiums: the ticket takers, the ushers, some of the people who work in concession stands. Most arenas contract with catering companies, such as Aramark, Centerplate, Delaware North, Legends Hospitality and Levy Restaurants to provide food and beverage service. And those companies often subcontract with smaller operations to staff the events. The walking vendors—the ones who patrol the stands, hawking beer and popcorn—are classified as independent contractors.

“We kind of get the short end of the stick with the gig-based economy,” says Nick, a 27-year-old vendor who also asked to be identified by his first name. He works most Philadelphia events and occasionally travels to others.

The five major catering companies combine for approximately $23 billion in revenue annually, according to public filings and analyst estimates. None returned a request for comment about whether they planned to pay their workers during the shutdown.

Matt Young, 42, who recently sold his subcontracting company, Event Management Solutions, feels certain that the big guys will not take care of the little guys. So on Friday, he started a GoFundMe to benefit the vendors.

“These guys aren’t even paycheck to paycheck,” he says. “A good number of them are day to day.”

The shutdown has revealed tears in the social safety net. Since the vendors are independent contractors, many do not receive sick pay or health insurance from their employers. Before the arenas closed, some of them may have been unwitting transmitters of COVID-19 because they could not afford to take a day off. And many of them arrived at vending after struggles with addiction or the law. They are not always well positioned to find alternate employment.

“I’ve had a lot of them call me and say they don’t want to have to go back to the street corner,” says Young. “They’ve been able to legitimize themselves through this industry.”

Some vendors work at their local stadiums, making $10,000 or $15,000 a year to supplement their family’s income. Rasmussen, for instance, also works on the crew that switches the Wells Fargo Center from basketball to ice hockey. Those employees will be compensated for at least some of the work they will miss.

Billy Anderson, 51, lives outside Chicago and has a child with special needs. He can stay home during the day while his wife works, then get to any of the stadiums within two hours’ drive and earn some extra cash. He had been wiping down his steering wheel with Lysol and throwing his clothes in the washing machine as soon as he got home. At the final Blackhawks game before the shutdown, the vendors sensed they might not see one another again for a while. They elbow-bumped goodbye.

“I’m screwed,” he says. “But I know there are people worse off than me.”

Those are the people, such as Mark and Anthony, 29, who draw their entire salary from vending. When leagues release their schedules, these vendors plot out the matchups most likely to draw fans, then hop in their cars and zigzag across the country. Anthony works for 16 of the 32 NFL teams; he can sometimes do two games in a day if the Colts are playing in the early game and the Bears or Titans are late. He spends 300 nights a year on the road. Someone working that kind of load can come to rely on anywhere from $75,000 to $100,000. Now that’s all gone.

So far, Young’s GoFundMe has raised just over $1,100. (Six hundred of that is from his parents, he says.) He hopes that number will increase over the next few days as the vendors who do not have home internet access visit libraries and post the link on social media. He plans to disburse funds on Fridays, to mimic a weekly paycheck. His time in the industry means that he knows many of the vendors personally; as he vets them, he adds their Venmo and Paypal accounts to his list of beneficiaries. He thinks that the answer lies in a large number of small-dollar contributions.

“Like a ‘tip your beer man’ campaign,” says Young. “Pre-tip us now. Don’t tip us in two months or two years, but we’ll take your tips now.”

But they cannot even be certain that life will go back to normal in two months or two years. David Hernandez, 43, started selling beer at Cowboys games and other regional events during the financial crisis. His experience then has him concerned about the aftermath of the coronavirus.

“People did come back, but they didn’t come back with the amount of income they normally did,” he says. Once the stadiums reopen, “are they gonna be willing to spend the normal $15 for a beer?”

Back in Indianapolis on Wednesday, Mark collected the last money he will see for a while: about $40 in commissions and $75 in tips. He had plans to work a doubleheader on Saturday—the Big 10 tournament in the afternoon at Bankers Life Fieldhouse, then the Supercross motorcycle event at Lucas Oil Stadium half a mile west. At least I’ll have that, he thought. By Thursday afternoon, the Supercross was off, too. He tried to pick up a shift at the FC Cincinnati game. As he signed up, it was canceled. He gave up.

Then he started coughing. It’s probably just a cold, he insists. He doesn’t think he has a fever. He has Medicaid, but he does not anticipate seeing a doctor or being tested for COVID-19. If the stadiums were open, he would go to work. So he would Clorox his tub and wash his hands and sell beer. He needs to eat, after all.

“I’m really stubborn when it comes to that stuff,” he says. He coughs again.