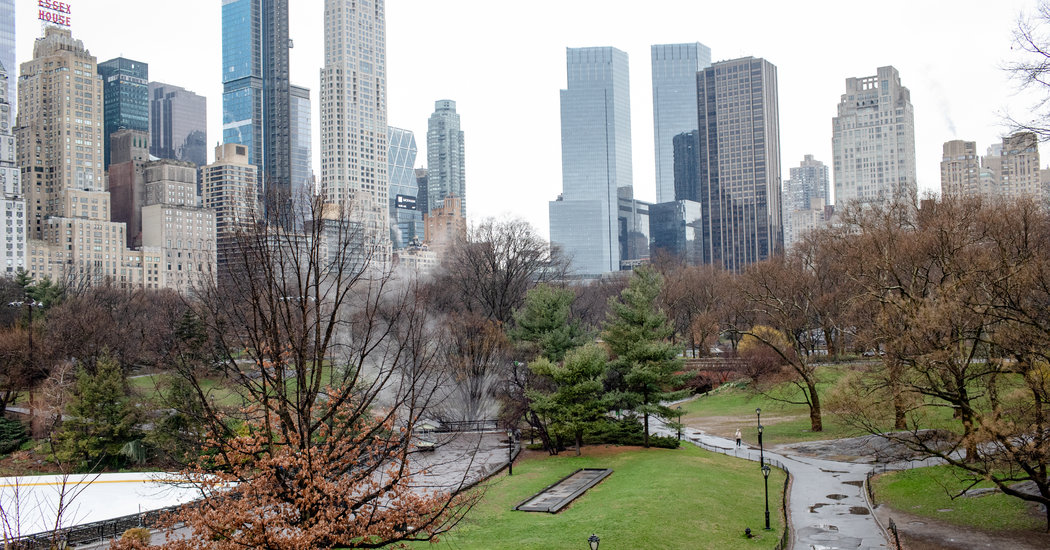 We’re covering the White House’s plan to address the economic fallout from the coronavirus, Joe Biden’s growing lead in the Democratic presidential race, and China’s expulsion of journalists from The Times and other U.S. news outlets.

The Trump administration has called for $1 trillion in spending, including $250 billion for direct payments to Americans, as the federal government prepares to fight the coronavirus pandemic and an almost certain recession.

The Treasury secretary, Steven Mnuchin, told Republican senators on Tuesday that he envisioned sums covering two weeks’ pay going out to Americans by the end of April, according to people familiar with the discussion.

Here are the latest updates and maps of the outbreak.

“The Daily”: Today’s episode includes a conversation with the governor of New York, one of the states hit hardest by the pandemic.

What to know: The Times is providing free access to much of our coverage, and our Coronavirus Briefing newsletter — like all of our newsletters — is free.

Another angle: A Tony Award-winning actress invited theater kids to share songs from student shows that have been postponed or canceled, and thousands responded.

What we can do next

Melina Delkic, of the Briefings team, spoke with Donald McNeil, a health reporter who has been covering experts’ recommendations on what to do.

You’ve said this is a crisis but it’s not unstoppable. How do we stop it?

It’s basically urgent that America imitates what China did. China had a massive outbreak spreading all over the country, and they’ve almost stopped it. We can shut off the roads, flights, buses and trains. I don’t think we’ll ever succeed at doing exactly what China did. It’s going to cause massive social disruption because Americans don’t like being told what to do.

Is that what some countries are missing? This sense of collective action and selflessness?

That is absolutely what many Americans are missing — that it’s not about you right now. My parents were in the World War II generation and there was more of a sense of we’re all in this together.

We’ve got to realize that we’re all in this together and save each other’s lives. That has not penetrated yet, and it needs to penetrate because we all have to cooperate.

I imagine that after decades of covering epidemics, you understood Covid-19’s severity early on. Tell me about when this became serious for you.

I remember vividly — I went on vacation to Argentina, not thinking this was terribly serious: It sounds like an animal disease and it’s going to kill a limited number of people. By the time I came back, China admitted there was sustained human-to-human transmission. I started watching the case counts double and doing the math in my head, and I realized: This is going pandemic.

The former vice president easily defeated Bernie Sanders in Arizona, Florida and Illinois on Tuesday, all but eliminating the chance for a comeback by the Vermont senator.

In a brief victory address from his home in Delaware, Mr. Biden offered reassurances to a country in the grip of the pandemic and spoke directly to Mr. Sanders’s supporters: “I hear you, I know what’s at stake, I know what we have to do,” Mr. Biden said. “Our goal as a campaign, and my goal as a candidate, is to unify this party and unify this nation.”

The details: Here are four takeaways from Tuesday’s voting and the full results.

News analysis: Participating in a healthy democracy isn’t supposed to be at odds with staying healthy. One of our political reporters asks: Is an election necessary during a pandemic?

Another angle: Representative Dan Lipinski, a conservative Democrat from Illinois who opposed abortion rights and the Affordable Care Act, lost a primary race to his progressive challenger, Marie Newman.

The masks in our midst

The coronavirus is invisible to the naked eye, so what will historians see when they look back on 2020?

Surgical masks, of course. Our chief fashion critic, Vanessa Friedman, explored why they were invented (in the 1890s) and widely adopted (during the Spanish flu epidemic of 1918), and how they become shorthand for racism early in this pandemic.

“The mask,” she writes, “has become the virus’s avatar; shorthand for our looming dread, desire to hide, inability to protect ourselves, and desire to do something — anything — to appear to take action.”

Rebuke from China: Beijing today accused the U.S. of starting a diplomatic war that led Beijing to expel almost all American journalists from The Times, The Wall Street Journal and The Washington Post.

“New stage” for Tom Brady: After the quarterback announced that he was leaving the New England Patriots, who have won six Super Bowl titles in his 20 seasons, he was expected to join the Tampa Bay Buccaneers, according to a person familiar with his plans.

Snapshot: Above, a 25,000-year-old, 40-foot-wide circle of woolly mammoth bones, on the steppes of what is now Russia. The purpose of the structure remains a mystery to archaeologists, who reported on the 2014 discovery this week.

What we’re reading: This Harvard Business Review article about two new mothers returning to work in Sweden and the U.S. “Reading the two stories side by side shows just how dismally work-family policies in the U.S. measure up,” says Francesca Donner, the director of our Gender Initiative.

Cook: This rosemary, olive oil and orange cake is great for what our Food editor Sam Sifton calls “procrastibaking,” though “anxiety baking may be the better term” these days.

Read: In “Sick Souls, Healthy Minds,” the writer John Kaag copes with a turbulent period in his personal life by reading William James, a 19th-century philosopher and psychologist who suffered from anxiety and depression.

Smarter Living: There are ways to help your community while practicing social distancing. For starters, donate — ideally money, not food — to your local food bank.

To understand the economic fallout of the pandemic, Times Insider spoke to Jeanna Smialek, who covers the Federal Reserve. Below is a condensed version of the conversation.

The Fed slashed interest rates to almost zero. How could that affect us?

The move should help consumers borrow and spend. For example, it should make mortgages cheaper. But nothing the Fed can do at this point is going to offset the full shock of the coronavirus, because its tools are just not well suited to making up for lost work hours or helping employees who have missed out on paychecks.

Can nations work together to help the global economy rebound?

Central banks do not have the firefighting power that they had going into the 2008 financial crisis. Many central banks, like in Japan and in parts of Europe, already had very low or even negative interest rates. And so they just have less room to act.

What matters now is what happens to the companies getting clobbered in the moment. Is this a short-term blip that is painful but not devastating? Or will this kill companies, thereby having greater repercussions for financial markets, and be much more long-lived in its pain?

If there’s one takeaway for readers on the global economy, what should it be?

It’s been said by every person on the planet at this point, but the single best thing for the global economy is for this virus to be contained. More than any fiscal or monetary package, the public health response here is most important.

P.S.
• We’re listening to “The Daily.” Today’s episode is about New York’s response to the coronavirus.
• Here’s today’s Mini Crossword, and a clue: Units of a molecule (five letters). You can find all our puzzles here.
• Here’s how The Times Magazine made its most recent print edition interactive.