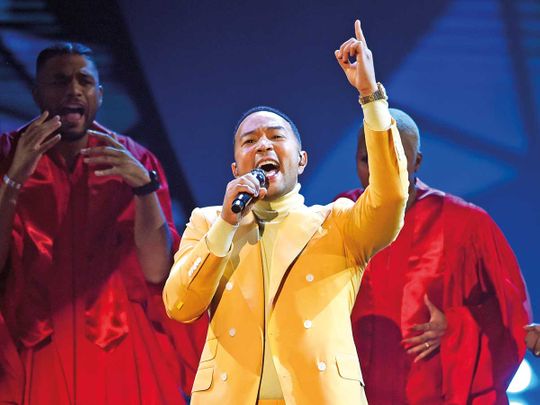 The ‘Together At Home’ initiative, in conjunction with the World Health Organisation and Global Citizen, has also roped in John Legend for a private performance.

“My friend Chris Martin did a lovely little concert from home today. I’ll be doing one tomorrow at 1pm Pacific time. See you soon. We’ll try to get through this together! #TogetherAtHome,” tweeted Legend, hours ahead of his 53 minute Instagram Live session that also saw an appearance by his wife Chrissy Teigen, draped in a towel and a head turban.

The duo kept up the banter, while talking about the importance of hygiene during the coronavirus pandemic in between interludes of music and anecdotes from their lives.

Legend belted out some of his biggest hits, including ‘Everybody Knows’, ‘Ordinary People’ and ‘All of Me’, with Teigen also pitching in.

“Social distancing is important, but that doesn’t mean it has to be boring. I did a little at-home performance to help lift your spirits,” posted Legend on his Instagram, as he nominated Miguel and Charlie Puth to take the ‘Together at Home’ initiative forward.

“Hi, everyone. We’re coming to you live from our warehouse, actually,” Urban said. “We thought we’ll just set the stream up tonight, mostly because I was supposed to be playing tonight, and I just thought it would be nice to be able to play anyway, even though we can’t be in front of all you guys tonight.”

Elsewhere, Miley Cyrus was looking to spread hope and warmth to those stuck at home during the coronavirus outbreak.

She announced Tuesday that every day this week she’ll be appearing on Instagram Live for a talk show she’s calling ‘Bright Minded: Live with Miley’.’

Her first guest on Monday was her own therapist, and her second on Tuesday was Demi Lovato.

“I haven’t changed these sweat pants in about five days,” Cyrus said during Tuesday’s live stream, “and I don’t plan on doing it any time soon.”

“These afternoon sessions are all about bringing light to a dark time, staying positive and overcoming stress during this pandemic,” Cyrus said in a statement. “They also offer hope and escapism, optimism and a way to stay connected while we all try to social distance. STAY SAFE AND HEALTHY!!!!! xoxo.”