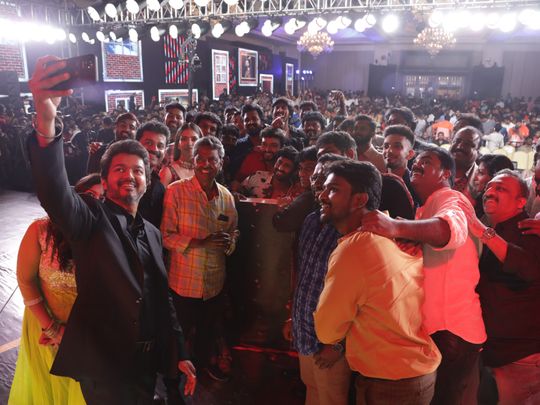 The audio-launch ceremony of Vijay’s upcoming film, ‘Master’, was held at a private event on March 15 in Chennai.

Tamil actor Vijay, who seldom speaks to the media, makes up for it during the audio launches of his films. Looking dapper in a black tuxedo, he arrived at the music release function of ‘Master’ and immediately won hearts with an impromptu dance act on stage with co-actor Shantanoo Bhagyaraj and music composer Anirudh.

‘Master’ is directed by Lokesh Kanagaraj and features Vijay in the lead. Kanagaraj, who made an impressive debut with ‘Managaram’ and followed it with another successful film ‘Kaithi’ last year, said, “Vijay’s role in ‘Master’ is of a different dimension — something that we have not seen in his earlier films.”

Malavika Mohanan is paired opposite Vijay. Interestingly, the versatile Vijay Sethupathi plays a significant role opposite Vijay. From the poster released earlier the two Vijays seem to be locking horns.

Vijay in his speech regretted about not being able to include his fans in the event, the reason being the unfortunate accident that occurred during ‘Bigil’ (his last film) audio launch and the present Corona scare.

Quoting lines of a song ‘Elaam Pugazhum’ from his film, Vijay compared life to a river that flows its course unaffected and unperturbed by anything en route.

“Be it the people who light lamps and throw flowers to welcome it or those who throw stones into it, the river continues on its journey,” he said. “There will be some who will accept us and some who will oppose us. Our job is to continue with our work and remain unaffected by anything.”

Wrapping his speech with lines from the ‘Oru Kutty Kathai’ song, he added, “Life is very short, nanba always be happy. Kill them with success and bury them with your smiles.”