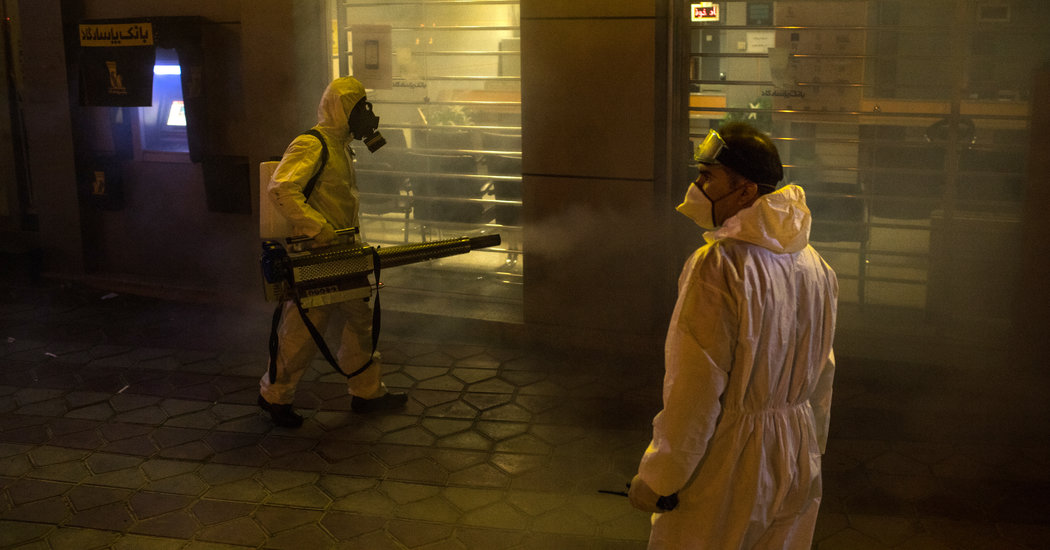 More senior government figures have caught the coronavirus in Iran than anywhere else. Field hospitals have been erected in parking lots, stadiums and wedding halls to handle the overflow of patients.

A top health official implored Iranians on Tuesday to avoid spreading the contagion by not traveling during the upcoming Persian New Year, saying anyone who ignored the advice was “inviting death.”

Iran’s strategy for fighting the pandemic has been vexed by power struggles within its hierarchy that have erupted publicly.

An extraordinary burst of contradictory messages in recent days has angered many of the country’s 80 million citizens, already stressed by severe American economic sanctions, unemployment and mistrust of their leaders.

Some are even hoping the Islamic Revolutionary Guards Corps and other parts of the military will take charge and enforce quarantines. For many Iranians, such wishes were unthinkable just a few months ago, when the Guards crushed antigovernment protests and covered up the shooting down an airliner, killing 176 people.

“We need leaders who know what they are doing to take control and bring order. The generals are better at this than the government,” said Mehdi, a 46-year-old restaurant owner in Tehran and father of two, who has kept his family indoors for weeks.

In phone interviews and texts, supporters and opponents of President Hassan Rouhani’s government heavily criticized what they called its poor judgment, incompetence and failure to comprehend the severity of the crisis.

Many simply ignore government warnings about exposure. Siamak Ghassemi, an economic analyst in Tehran, posted a photo Tuesday on Twitter of shoppers jamming Tehran’s bazaar in a preholiday buying binge.

“This picture is the failure of all of Rouhani and his government’s policies and rhetoric in battling coronavirus,” he wrote.

Iran’s dual power structure — a religious supreme leader controlling the armed forces, and a president heading a civilian administration — has long been a recipe for factional rivalry. Interviews with officials, medical workers and political analysts suggest that it has left management of the epidemic reeling, without a clear commander.

“It is a bit chaotic, that’s a good way to put it,” said Henry Rome, an Iran analyst at the Eurasia Group, a political risk consulting firm. While the government is not at risk of collapse, he said, officials “do not want to cause panic, or shut down what’s left of the economy, or implicitly admit they made a mistake.”

Mr. Rouhani and his top health officials have struggled as the information they offered was publicly disputed and their strategies backfired. Even their effort to blame American sanctions, which obstruct Iran’s ability to purchase medical supplies and have weakened its health system, is seen as an excuse.

While he told the military to work with the civilian government, Mr. Khamenei effectively authorized it to sideline Mr. Rouhani’s government if needed.

In a closed meeting on Friday, the two sides clashed on strategy, according to four people with knowledge of the meeting.

Mr. Rouhani demanded that the armed forces adhere to his command. The generals refused and said Mr. Khamenei had authorized them to act independently.

The military men proposed closing off Tehran and vast swaths of the country, shutting businesses and limiting people’s movements — and using the armed forces to enforce the restrictions, as China and Italy have.

Mr. Rouhani refused, arguing that his government has no resources to support millions of people under quarantine. Basic services could collapse, he said, hurtling the nation deeper into crisis.

The standoff spilled into view with conflicting comments that infuriated the public.

Rebutting accusations that Mr. Rouhani was downplaying the threat, his top adviser, Hesamedin Ashena, wrote on social media, “He declared the country was running business as usual in order to prevent the collapse of the bureaucratic system and chaos.”

Apparently ignoring Mr. Rouhani, General Bagheri said on Friday that the military would severely restrict traffic, close businesses and clear people off the streets in Tehran and at least 11 provinces. He said volunteers attached to the armed forces would survey every Iranian household to identify potentially infected patients and set up field hospitals for screening and treatment.

Barely two days later, Mr. Rouhani said there would be no shutting of cities, no lockdowns, no forced closure of businesses.

“This rumor that in Tehran or other cities businesses and shops will be quarantined is not happening,” Mr. Rouhani said. He also berated governors who had sounded alarms that their provinces should be cordoned off.

By Monday, Mr. Rouhani appeared to have dissuaded the military from imposing strict rules. But local authorities defied him, independently closing provinces and several cities.

“The only way left to control the situation now is to militarize the response and force people to stay home,” said Dr. Kamiar Alaei, an Iranian health policy expert and president of the Institute for International Health and Education in Albany, N.Y. While Mr. Rouhani fights moves that undermine his power, he added, “the people here are collateral damage.”

Since the outbreak in Iran began last month, officials have accused the Health Ministry of hiding the true toll.

The official tallies spiked on Tuesday to 988 dead and more than 16,000 infected, but health experts and several Iranian officials say the real numbers are much higher because too few people have been tested for the virus.

Mr. Rouhani’s critics have denounced his decision to permit flights to and from China, where the epidemic originated; his refusal to restrict internal travel or close off hot spots; and his delay in creating an emergency response committee.

Many Iranians, hearing an alarming mix of fact and rumor, have sheltered at home, while others don’t know what to believe. Bodies have piled up at hospital morgues and at least one cemetery in Qom has dug mass graves, satellite photographs show.

Mr. Rouhani has been mocked for being mostly absent from public view and downplaying the threat. His policy has appeared to center on keeping up the appearance of business as usual, to project control and ward off more economic hardship and social unrest, analysts said.

On the matter of Shiite shrines, the government drew fire from multiple directions. Mr. Rouhani refused calls to quarantine the holy city of Qom, Iran’s first hot spot. He wanted to shutter some shrines like those that draw pilgrims to Qom, but hard-line clerics balked.

Mr. Khamenei last week approved an order shutting down two popular shrines, in Qom and Mashhad, where crowds mingled, prayed and touched the walls and tombs for blessing.

After they were padlocked on Monday, hundreds of men, apparently organized by hard-line factions in seminaries, stormed both shrines, breaking open the doors and overrunning security forces who pleaded with them not to enter, videos on social media showed.

Iranians on social media then berated the government for what they called its double standard: Security forces shot unarmed protesters last November, but did not curb religious zealots who threaten public health.

“Corona has peeled off the layers of skin to expose them for who they really are,” said Mohamed Javad Akbarin, a religious and political activist, in a Twitter post.