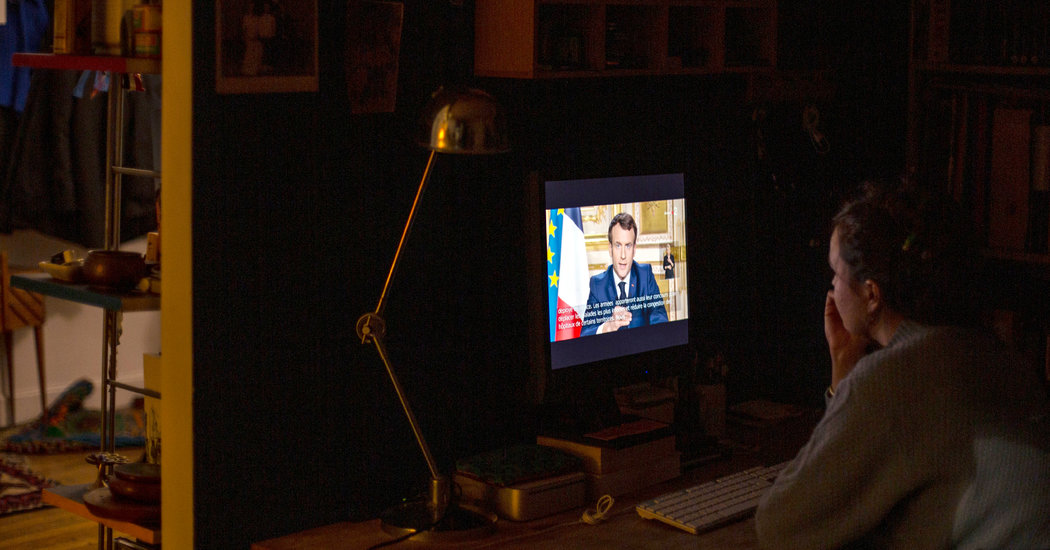 BRUSSELS — Adopting martial language, President Emmanuel Macron ordered the French to stay at home for at least the next 15 days, as France put in place some of the most severe measures in Europe to try to curb the raging coronavirus.

The aggressive move by France came as other countries in the region introduced measures that their leaders described as unprecedented in postwar Europe, and as the European Union proposed a 30-day shutdown of all nonessential travel into the bloc from other countries.

The movement of French citizens will be tightly restricted, starting from midday on Tuesday and lasting through at least the end of the month, with people expected to stay home, leaving only for essential activities like food shopping. Anyone violating the order faces punishment.

“We are at war,’’ Mr. Macron said in an address to the nation Monday night. “The enemy is invisible and it requires our general mobilization.”

The French army will deploy to transport the sick to hospitals, and a military hospital with 30 intensive care beds will be set up in the eastern region of Alsace, where one of the largest infection clusters has erupted.

Mr. Macron was responding to severe warnings from doctors about an increasingly dire situation. Jérôme Salomon, a top official at France’s health ministry, told France Inter radio on Monday that the situation in France was “deteriorating very quickly.”

“We are seeing that the number of cases is doubling every three days,” Mr. Salomon said. “There are hundreds of serious cases this morning in France’s intensive care units,” he said, adding that authorities were worried that the speed of the epidemic could provoke a “saturation of the French hospital system, which we absolutely want to avoid.”

In Germany, Chancellor Angela Merkel announced a new raft of measures to minimize social contact: Religious services will be banned, and bars, clubs, discothèques and brothels shut. Restaurants will be allowed to open but only until 6 p.m., with wide spacing among diners, and hotels are being asked not to accept tourists. Schools across Germany were preparing for a prolonged shutdown.

Even if some criticized Germany’s response as slow, Ms. Merkel said that the measures were wide-reaching and an infringement on personal freedoms implemented only reluctantly. “In the 70-year history of the German Federal Republic, we have never had to do what we must do now,” the chancellor said.

The number of infections in Germany continued to climb rapidly, reaching 6,400 by Monday, but the fatality rate remains notably low: Only 16 people have died of the virus so far.

The proposed travel ban into the European Union, which could be extended beyond 30 days, was vital to keep the internal borders of the bloc — and the so-called Schengen free-travel zone — as open as possible to promote European solidarity and to help the Continent’s economy, which appears to be heading into a recession, said Ursula von der Leyen, president of the European Commission.

“The less travel, the more we can contain the virus,” Ms. von der Leyen said, after a discussion on Monday with Group of 7 leaders, including President Trump, in which they agreed to coordinate research into the new disease and their social and economic responses to it.

The travel ban must be approved by the 27 member states, but Ms. von der Leyen said that there was strong support for the proposal, which will be decided on by the leaders of the bloc on Tuesday in a teleconference.

The proposal is an effort by Brussels to unify border practices after numerous member states have unilaterally shut themselves off to try to avoid further infection from travelers from where the infection rages, like Italy.

Spain, also with high rates of infection, announced on Monday that it would shut its land borders at midnight to foreigners. In emergencies, member states are allowed to introduce border controls.

By late Monday, Spain had about 9,200 cases and 330 dead, which is the worst toll in Europe after Italy. Half of the Spanish cases are in the Madrid region.

Austria, which has banned citizens from numerous European countries from entering, has taken one of the toughest stances in Europe, banning gatherings of more than five people and imposing steep fines for those disobeying a far-reaching curfew.

France had already closed schools, cafes, restaurants and nonfood shops, as well as Paris parks. But the French government was taken aback by the casualness with which the French, and particularly Parisians, greeted the earlier restrictions on Sunday. The parks were full and there were crowds along the embankments and at the outdoor markets and pushing into bakeries and small food shops.

“There was something shocking about it,” Hervé Berville, a legislator who is close to Mr. Macron, said in a telephone interview Monday. “The French are not respecting the security warnings,” he said. “People are not following social distancing.” He said that it was “shocking’’ that people were ignoring health professionals and “the advice coming from the highest levels of government.’’

So Mr. Macron tried to convey the urgency of the need to follow the order to stay home — or else. “Any violation of these rules will be penalized,’’ he said in Monday’s speech. The French Interior Minister, Christophe Castaner, said those caught outside without a valid reason would be fined.

But in addition to his stern warning to stay inside, Mr. Macron also promised support for the French economy and French wage-earners, saying utility bills and rent would be “suspended” for struggling small businesses. So would his vaunted economic reforms. And he promised: “No business will be allowed to fail.’’

Given the movement restrictions, he also announced that a second round of local elections, scheduled for March 22, would be postponed.

“I know what I am asking of you is unprecedented but circumstances demand it,” Mr. Macron said.

Italy, Europe’s hardest hit country, on Monday adopted emergency economic measures worth 25 billion euros, or about $28 billion, to help protect the economy, as the number of cases jumped by 2,470 to 27,980 and deaths increased by 349, to 2,158.

In announcing the measures, Prime Minister Giuseppe Conte said that no Italian “should feel abandoned,” during this crisis, and that the measures “were concrete evidence of the presence of the state.”

Funds were being made available to postpone mortgage, loan and tax payments, and to help economic sectors hardest hit by the outbreak. Professionals, the self-employed and freelancers would receive financial support, “to safeguard the period of inactivity,” said Labor Minister Nunzia Catalfo, and quarantining will qualify as sick leave.

Mr. Conte said the measures amounted to an “Italian model” to “confront this economic and social emergency,” and he called on the European Union to follow. “Italy is a promoter of a message to all the European institutions,” he said.

The European Union has been criticized for moving slowly to address the crisis, but health has always been a matter for member states, not for Brussels. The proposed 30-day travel ban was done in part to protect internal trade and travel, including the smoother movement of medical supplies.

Ms. von der Leyen, the European Commission president, said she understands “that member states do everything to protect their people, but we can’t hamper our single market’’ for goods and people, she said. “We need a good functioning single market.’’

The Commission also proposed special “fast-track” traffic lanes to speed needed medical supplies from one country to another.

She explained that the proposed travel ban from third countries would allow exemptions “for E.U. citizens coming back home, health care workers, doctors and nurses.” British citizens will be treated the same as other bloc citizens until the end of 2020.

A Commission statement made clear that “a temporary travel restriction could only be effective if decided and implemented by Schengen states for all external borders at the same time and in a uniform manner.”

Some 10 of the 26 countries that make up the passport-free Schengen Area, which allows for largely free movement across mainland Europe, have reintroduced border controls, a spokesman for the European Commission said.

Britain, which had been taking a much less stringent approach to closures than the rest of Europe, announced moves on Monday putting it more in line with the rest of the Continent. The government is now urging people to stop going to pubs, restaurants and the theater, and is instituting strict quarantine procedures for the sick and their family.

Reporting was contributed by Matina Stevis-Gridneff and Monika Pronczuk in Brussels, Adam Nossiter in Paris, Mark Landler in London, Katrin Bennhold and Melissa Eddy in Berlin, Raphael Minder in Madrid, Elian Peltier in Barcelona, and Elisabetta Povoledo in Rome.