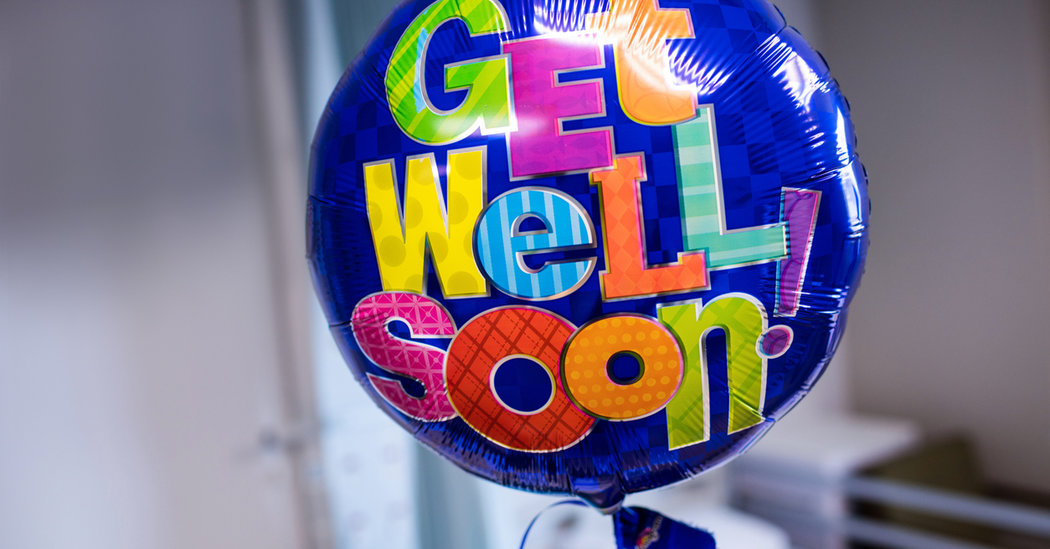 I didn’t even notice the balloons at first. With our laser focus on coronavirus, on our protocols and procedures, our carts of isolation gowns and our fears about mask shortages, it is easy to see only pandemic these days.

But as we stood outside the cancer patient’s room on our rounds one recent morning, I finally took note. Three “Feel Better Soon” balloons. They were the kind you might buy at the gift shop, colorful and festive. He had been in the hospital for weeks and they were shrunken by now, wilting.

The intern told us his story. He was in his 30s — close to my age, a moving target that will always feel too young for devastating diagnoses — with a cancer that we could not cure. After weeks on the general medical floor, he had come to our intensive care unit after having been intubated for a procedure, and the overnight team had taken the tube out quickly, so it would be a short I.C.U. stay. As my intern talked, I watched the balloons inside my patient’s room, bobbing hopefully. My patient caught my eye through the door and gave me a small wave.

We picked up the pace as we made our way down the hall to round on another young person — otherwise healthy but now in isolation while being ruled out for coronavirus. This would be my first potential Covid-19 case, and after all the prep, I admit that I was a little excited to find myself donning the isolation gear. I have always wanted to be in the thick of things.

Under the nurse’s watchful eye, I carefully pulled on my yellow isolation gown, making sure to tie it tight so that it would close in the back. Next was the eye shield. I had just dragged the strings of the N95 respirator over my ponytail and was about to put on my gloves when one of the residents gestured me toward my young cancer patient’s room. His expression told me what I needed to know: It was urgent. I ripped off the gown, tossed my mask away and headed over.

Inside the room, the patient was pale. His blood pressure, which had been rock-solid stable earlier that morning, was now teetering. His heart raced. A pool of dark red blood staining his white sheets explained what had happened. The tumor on his leg had started to bleed, a liter in minutes. This could kill him. Our calm turned to urgency.

We gathered quickly. The nurse helped my patient turn to his side and held him there while a surgery resident worked to stanch the bleed. My residents swirled about, running in suture kits and epinephrine-soaked gauze, racing to the lab to return with a cooler of blood for transfusions. Meanwhile, I found myself at the head of my patient’s bed with my gloved hand on his shoulder. I met his eye. He looked scared.

“You’re doing OK,” I told him. “The surgeon is here. The bleeding will stop.” In training, we used to make a grim joke: All bleeding stops eventually. I thought of this now but of course I would not say it. His eyes did not leave mine. Next to me, a nurse hung another blood transfusion. Behind us, the balloons bounced. “We’ve got this,” I said. He nodded cautiously, as if he could will himself to believe me.

The seconds ticked by. “Almost done,” the surgeon announced. I felt my patient tilting back and tightened my grasp. He flinched, and I apologized. And then, it was over. The bleeding had been stopped and the surgeon left. My patient’s blood pressure cuff cycled again. His heart rate slowed. I took my hand off his shoulder. He closed his eyes, overwhelmed and exhausted.

Only when I had left his room and was midway through gowning up in my isolation gear once again, did I realize that for those few minutes, there at my patient’s bedside, I had not once thought about coronavirus. Not about isolation protocols or the rapidity of testing or how we propose to discharge patients who test positive. These are all questions that need to be answered. But for those few minutes, my mind cleared, and I thought only about the patient in front of me.

Even as public life grinds to a halt, here in one of the intensive care units that will become ground zero for coronavirus infections, the everyday tragedies continue. Our patients have cancer. Heart disease. Transplants. Their bodies fail them. And now, they have to face a new set of realities — doctors in masks, limited hospital visitors, fear and isolation. They need us now, more than ever. As a doctor in what feels like an eerie calm before an unimaginable storm, I must find some way to balance it all.

So when I think about Covid-19, as I prepare to be part of decisions about triage and how to allocate our resources, to change the patterns of my own life, I will remember this. My hand on my patient’s shoulder, his eyes locked on mine, those little balloons bouncing in the corner of his room. Next time, no matter what else is going on in our unit, I will try to notice them.

Daniela Lamas is a critical care doctor at Brigham and Women’s Hospital and a writer for the Fox TV drama “The Resident.”