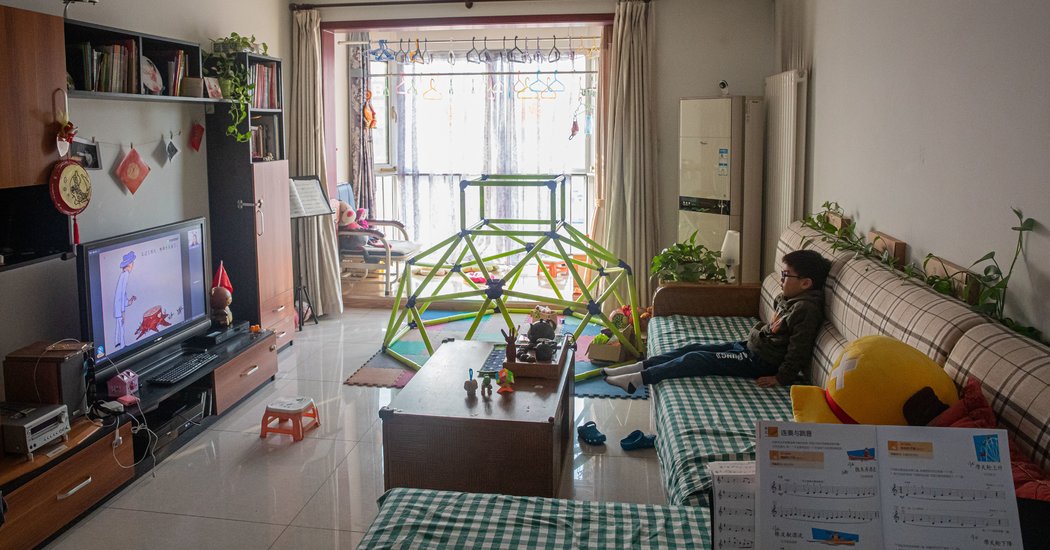 BEIJING — Like hundreds of millions of other children worldwide, Liu Chenxinhao and Liu Chenxinyuan were getting used to doing class work online. After their elementary school closed because of the coronavirus outbreak, the brothers received their homework through a smartphone app.

Then their schooling screeched to a halt. Their father, a builder, had to go back to work in a neighboring province of China. He took his phone with him.

Now the only device on which the boys can watch their school’s video lessons is 300 miles away. Their grandmother’s $30 handset only makes calls.

“Of course it will have an effect” on their education, said their father, Liu Ji, 34. “But I can’t do anything about it.”

For all of China’s economic advancements in recent decades, the rudiments of connected life — capable smartphones, reliable internet — remain out of reach for large segments of the population. As the virus has turned online conveniences into daily necessities, these people, most of whom live in China’s rural hinterland, have been cut off from their regular lives, especially when it comes to education.

The epidemic’s disparate impact on rich and poor, city and country, is a reality that more of the rest of the world is fast beginning to confront. More than 770 million learners worldwide are now being affected by school and university closures, according to the United Nations.

In China, many parents cannot afford to buy multiple devices for themselves and their children, even though many of the world’s cheapest smartphones — and most of the fanciest ones, too — are made in China. The nation is blanketed in 4G service, yet the signal is spotty in parts of the countryside. Home broadband can be expensive outside big cities.

Between 56 million and 80 million people in China reported lacking either an internet connection or a web-enabled device in 2018, according to government statistics. Another 480 million people said they did not go online for other reasons — for instance, because they didn’t know how.

It is one thing for this digital divide to prevent people from streaming movies or ordering barbecue during the coronavirus. It is another for it to disrupt young learners’ educations.

Students in some places have hiked for hours and braved the cold to listen to online classes on mountaintops, the only places they can get a decent cell signal, according to Chinese news reports. One high schooler in Sichuan Province was found doing homework under a rocky outcropping. Two little girls in Hubei Province set up a makeshift classroom on a wooded hillside.

For children of the millions of migrant laborers who work far from home to keep China’s cities cleaned and fed, another problem is a lack of supervision. These “left-behind children,” as they are called in China, are raised mostly by their grandparents, who are often illiterate and cannot help with homework even when it is not delivered via smartphone app.

Wang Dexue, an elementary school principal in hilly Yunnan Province, said that in some classes, half the students cannot participate in online lessons because their families lack the necessary hardware.

For households that can connect, parents are not always invested in helping their children with remote learning, Mr. Wang said. His teachers are still figuring out how to teach with video apps. “Teaching progresses much more slowly sometimes,” Mr. Wang said.

The virus has come at a delicate moment for China’s efforts to help its least fortunate. This is the year the Communist Party has vowed to eradicate extreme poverty. The country’s top leader, Xi Jinping, has held fast to that goal despite the public health emergency. But raising people’s incomes above the level of deprivation was never going to be as tough as providing them with better educational opportunities.

China ordered all schools shut in late January, as coronavirus infections began spreading quickly. The authorities have not required schools to hold online classes in the interim. But they have encouraged it, starting all-day TV broadcasts of state-approved lessons in math, language, English, art and even physical education. The official mantra: “Stop classes but don’t stop learning.”

With no common standards for that learning, however, the results have varied wildly. Teachers have experimented with apps and formats — live streams, prerecorded lessons or a mix. Many teachers are holding web classes now but plan to go over the same material a second time when normal classes restart. For some students, distance learning means switching to different class materials than they had been using before.

“It’s a big mess, that’s all I can say,” said Huang Ting of PEER, an educational nonprofit.

This month, schools are beginning to reopen in parts of China, mostly in the country’s more sparsely populated west, where the outbreak is deemed to be under control.

For students like the Liu brothers, the disruption has been profound. They are among the best students in their class, their father says proudly.

Like many other adults in rural Anhui Province, Mr. Liu and his wife work far from home most of the year. Mr. Liu can afford another smartphone, he said, but he doesn’t want to get his sons hooked on video games. Installing home broadband so the boys can watch classes on their television, as their teacher suggested, seems like a wasteful luxury.

Still, Mr. Liu regrets that he cannot do more to help his sons learn. When he called them at home recently, he urged them to read more and practice their penmanship.

Li Xingpeng teaches at a village elementary school in the remote northwestern province of Gansu. With his phone mounted on a wobbly plastic holder and its camera pointed at a notebook, Mr. Li has been holding classes via group video chats on DingTalk, a messaging app owned by the e-commerce giant Alibaba. The experience, it is fair to say, has been mixed.

On a recent morning, Mr. Li’s 9 a.m. fourth-grade English class began with a quiz. He read out vocabulary words in Chinese, and his eight or so students wrote them down in English.

He had just read out the third word — chufang, or kitchen — when a loud conversation drifted into the call.

“Hey, whose family is watching TV?” Mr. Li said. “Turn the volume down.”

When the quiz was over, he asked the students to check their answers then read them aloud, causing the group chat to erupt in a cacophony of vocabulary: HOUSElivingroomREADeatcooklistenSITBEDROOM.

At one point, one student disappeared from the call. She later messaged the group to say her phone had crashed. But by then, class was over.

Fifth-grade math was next. As Mr. Li went through the multiples of two and five, the video chat was filled with loud scraping sounds and electronic buzzing. He explained odd and even numbers to a screen full of bored stares. One student experimented with turning his webcam on and off, on and off, on and off.

Mr. Li knows that some of his students use such lousy phones that the video chats are a fog of pixels. But the deeper problem, he said, might be that many parents do not care about their young ones’ schooling. That goes for poorer families and better-off ones alike.

Some parents, he said, are even annoyed that their children use their phones to join online classes. Why? Because they — the parents — cannot spend as much time on Douyin, the Chinese version of TikTok.

In the mountains of Gansu, the parenting tends to be “free range,” Mr. Li said. He sighs.

Recently, Mr. Li became concerned when one of his fifth-graders, a boy named Xie Dong, didn’t join his online classes two days in a row.

Mr. Li first called Dong’s grandmother to ask after his whereabouts, but she didn’t pick up her phone. The boy’s mother works in Xi’an, a city 180 miles to the east. Eventually, Mr. Li found out through a neighbor that Dong had grown frustrated trying to download DingTalk on his family’s $100 smartphone and gave up.

Of all Mr. Li’s students, Dong worries him the most.

“If he doesn’t do better in school and doesn’t have anybody watching over him, just think of how bad things could get in the future,” Mr. Li said.