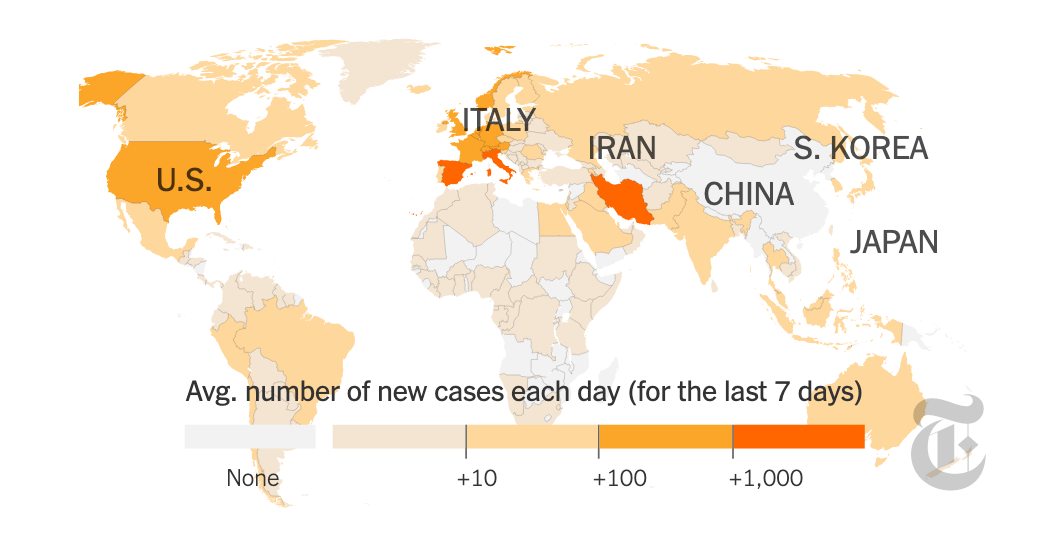 Checks may come to Americans as jobs vanish

With big pieces of the U.S. economy rapidly shutting down because of the coronavirus outbreak, President Trump urged Congress to “go big” with a stimulus package that would include sending checks directly to many Americans.

The details were in flux. Steven Mnuchin, secretary of the Treasury, told Republican senators privately that the administration wanted to pump about $850 billion more into the economy. About $250 billion would be used to give all but the highest earners about two weeks’ pay each. The checks would go out sometime in April.

The pandemic is beginning to hit workers hard. Restaurants, coffee shops, gyms and other businesses are laying people off. So are hotel chains: Marriott International is furloughing tens of thousands of employees. A flood of people inquiring about unemployment insurance in New York State crashed the website.

In less directly affected industries, employers are largely trying to keep people on the payroll, even if it means cutting hours. But many lack the means to keep that up for very long.

“It’s simple math,” said Deborah Weinswig, founder of Coresight Research, a business consulting firm. “You can’t have all expenses and no revenue.”

Kevin Hassett, a former top economic adviser to Mr. Trump, thinks the U.S. economy could shed as many as a million jobs in March because of the coronavirus. The left-leaning Economic Policy Institute projects up to three million jobs lost by summer.

One bright spot: Amazon said it would hire 100,000 workers to handle an expected surge in demand for home delivery of household goods.

Laid off because of the virus? There’s a good chance you qualify for unemployment benefits. If you’re new to all of that, here are the basics.

The race to find a treatment

Researchers are racing to come up with a drug to fight the coronavirus, either by destroying it or by interfering with how it attacks the body, our science correspondent Carl Zimmer reports. At least 50 possible drugs are being studied.

Scientists at Mount Sinai Hospital in New York and the Pasteur Institute in Paris are already testing some drugs on coronavirus grown in their labs. Findings are expected at the end of the week.

A key piece of the puzzle is understanding exactly how the virus hijacks host cells. For that, researchers at the Quantitative Biosciences Institute at the University of California, San Francisco, have drawn a map of the coronavirus. That job, which might typically take two years, was done in a few weeks.

“I got to the lab and said, ‘We’ve got to drop everything else,’” said Dr. Nevan Krogan, the institute’s director. “Everybody has got to work around the clock on this.”

There’s work on a vaccine, too. The first human testing of an experimental vaccine began Monday in Seattle, with 45 healthy adult subjects ages 18 to 55. The trial is expected to take at least a year.

Strict new rules at the border

The Trump administration plans to immediately turn back anyone attempting to illegally enter the United States from Mexico in an effort to limit the spread of the coronavirus, several officials told The New York Times.

The administration officials said ports of entry would remain open to American citizens, green-card holders and foreigners with proper documentation, as well as to commercial traffic.

But the order calls for anyone found to have entered the United States away from a legal crossing point, including asylum seekers, to immediately be returned to Mexico, and not be detained or given any hearing in the United States.

Officials said the effort was intended to prevent a virus outbreak inside border detention facilities, which they feared could spread quickly among the immigrant population and border patrol agents.

President Trump has already announced restrictions on travel from China and numerous countries in Europe, where there are large outbreaks of the virus. But Mexico has had only 82 confirmed cases to date — far fewer than the United States. The measure would not affect the border with Canada, which has more than 470 cases.

A new project from The Times’s graphics team explores just how far coronavirus testing in the United States has lagged behind other countries. Recent data shows that about 125 people per million have been tested in the United States; Italy has tested more than 16 times as many, and South Korea more than 40 times.

Survive your self-quarantine: Here are our suggestions for what to watch, listen to, cook and do with your kids.

Manage your anxiety: A psychiatrist explains how simple awareness training can hack your brain to keep panic at bay.

Don’t fall for myths: Vitamin C won’t ward off the virus; neither will zinc, echinacea or green tea. And wearing gloves may not be protective as you think.

Master hand-washing: Experts taught us the proper technique for keeping your hands clean, including how to turn off a faucet and to scrub often-overlooked areas like fingertips and wrists. They recommend liquid soap over bars, and clean cloth or paper towels over hand dryers.

My three kids and I are using the time to get creative together in the kitchen and reconnect with “from scratch” cooking. We kicked things off this morning with colorful new drinks using fruits and herbs. Tomorrow, I’ll be baking my first homemade bread — I found a two-hour recipe that looks amazing!