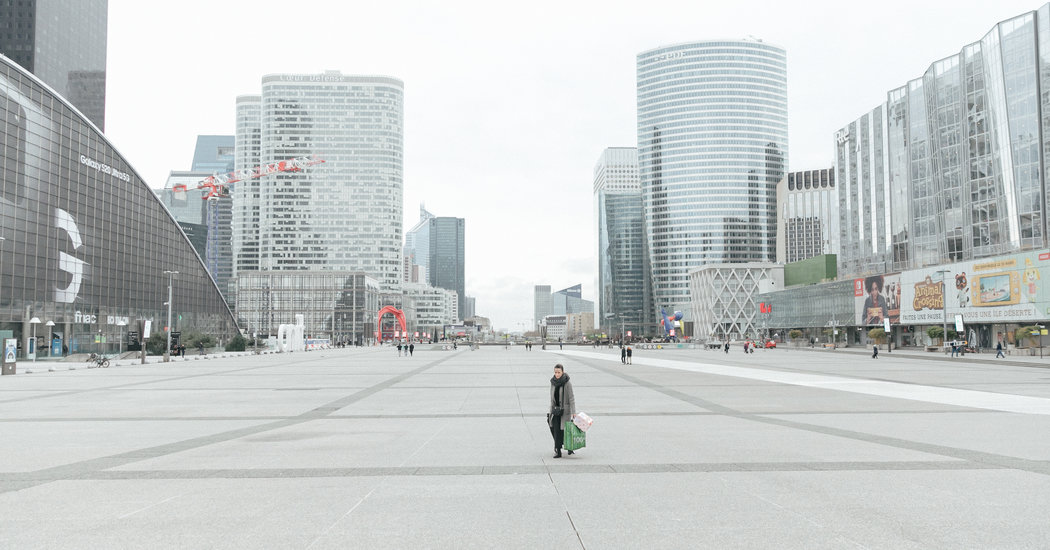 It’s becoming harder by the hour to find the new normal.

We need each other in a crisis like this, but we rightly fear congestion. France and Spain have ordered all cafes and restaurants shut down. In New York, it’s the same, with museums and Broadway theaters on hiatus. Mosques have closed in several countries, churches have canceled masses, and the pope prohibited the public from Holy Week celebrations.

Traditionally, we seek solace in religion, sports, entertainment and in the promise that modern science and societies provide all the tools needed to solve any problem.

But the coronavirus undermines our most basic ideas about community and, in particular, urban life. Historians tell us that cities emerged thousands of years ago for economic and industrial reasons — technological leaps produced a surplus of agricultural goods, which meant not everyone had to keep working the land.

Still, cities also grew, less tangibly, out of deeply human social and spiritual needs. The very notion of streets, shared housing and public spaces stemmed from and fostered a kind of collective affirmation, a sense that people are all in this together.

Pandemics prey on this relentlessly. They are anti-urban. They exploit our impulse to congregate. And our response so far — social distancing — not only runs up against our fundamental desires to interact, but also against the way we have built our cities and plazas, subways and skyscrapers. They are all designed to be occupied and animated collectively. For many urban systems to work properly, density is the goal, not the enemy.

Of course, we now have teleconferencing and an abundance of social media and other forms of remote, digital interaction. We had already drifted toward a kind of social distancing by living increasingly on our phones and in virtual communities, bingeing on Netflix.

The technology we consume today increasingly consumes us, for good and ill. It is escalating our anxieties with unending access to information and misinformation alike. But technology is also allowing many of us to carry on with certain kinds of businesses and act globally in ways we couldn’t have imagined a generation or two ago.

Even so, we still need one other, not just virtually. Ezra Klein in Vox raised the prospect of social distancing causing a “social recession,” a kind of “collapse in social contact that is particularly hard,” he wrote, “on the populations most vulnerable to isolation and loneliness — older adults and people with disabilities or pre-existing health conditions.”

There is evidence for this. Eric Klinenberg, a sociologist at New York University, wrote a book about a heat wave in Chicago in 1995, during which 739 people died. That event proved lethal among elderly Chicagoans living in poor, segregated neighborhoods that afforded residents little social contact.

But older Chicagoans living in similarly poor, crime-ridden communities who had access to what Mr. Klinenberg calls a robust “social infrastructure” — a network of “sidewalks, stores, public facilities and community organizations that bring people into contact with friends and neighbors” — died at a markedly lower rate.

Now those very forms of social interaction put people at greater risk. That’s one reason affluent New Yorkers with second homes in the countryside have been quitting the city in recent days like medieval characters in Boccaccio’s “Decameron” facing the Black Death.

During the last century, millions of urban-dwelling Americans fled to the suburbs. Cities cleared old neighborhoods and replaced them with giant housing projects in vast empty spaces, arguing that crowded urban slums had become petri dishes for disease.

But people have been moving back into cities even as technology has created myriad new ways of connecting remotely. Cities have become epicenters of new capital and creativity, because proximity breeds serendipity and strength, from which new ideas and opportunities arise.

Economists have talked about this urban migration in terms of dollars and cents. But the human value of shared space is ultimately incalculable. After 9/11, I visited the Islamic galleries at the Metropolitan Museum, where crowds had gathered. I asked some people there what brought them to the museum. They said they wanted to remind themselves of life and beauty and tolerance, and to seek strength in one another.

During the blitz of London, in World War II, the British Home Office ordered all theaters, concerts halls, movie houses and other public gathering spots shut, leaving residents to meditate on their grim fate at home.

The exception was London’s National Gallery, whose director persuaded authorities to let him keep one painting on public view (the picture was periodically changed, so people had reason to return). The gallery also organized a series of lunchtime classical music concerts.

Going out meant risking life and limb. But Londoners waited in lines that stretched out the front door of the gallery and across Trafalgar Square, hoping for seats. When a German munition fell on the gallery shortly before one concert, the audience and musicians relocated across the square to South Africa House. A few days later, when a 1,000-pound unexploded bomb was discovered in some rubble outside the gallery, the event was moved to a distant room and no one budged when the device was detonated during a Beethoven quartet.

The war shook the confidence of free and open democracies to survive a grave global threat. Modest though they were, the concerts gave Londoners hope, reminding them why they lived there and together.

Today’s threat is altogether another sort of challenge to solidarity and our way of life. It is not a heat wave or a blitz. It can’t be mitigated by going to concerts or museums. It requires isolation.

We will need to figure out a different approach, together.