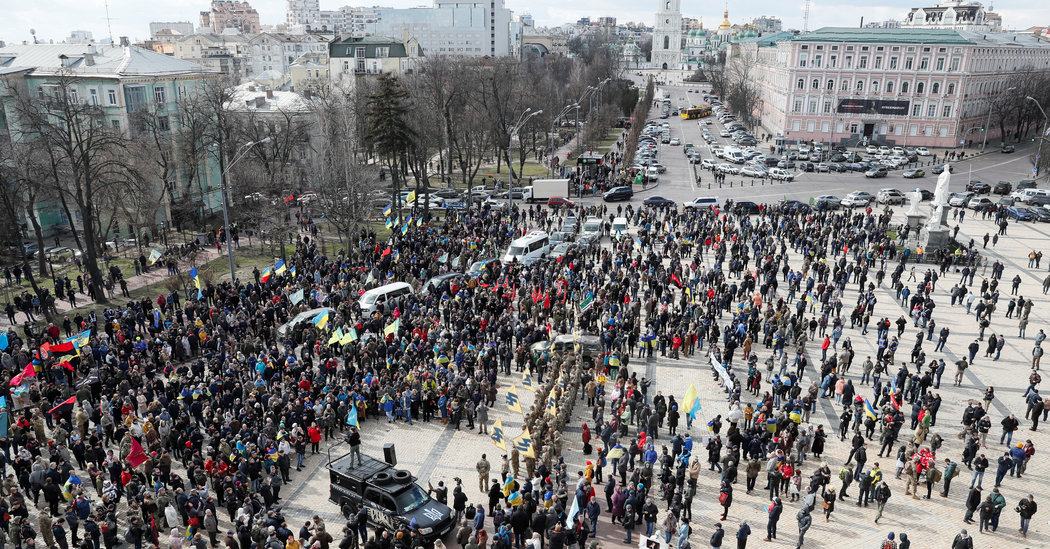 MOSCOW — Ukraine, like many countries, has closed schools and banned mass gatherings to combat the coronavirus. But unlike others, it has struggled to tamp down street protests, which persist over the war in the country’s separatist east.

At demonstrations over the weekend, several thousand people turned out in Kyiv, the Ukrainian capital, to protest what they perceive as a concession to Russia in talks to end the fighting. In so doing, they first defied a ban on gatherings of more than 200 people and then, as the prohibition was tightened, gatherings of more than 10 people.

“What the Ukrainian government is doing in terms of the national interest is more dangerous than the virus,” Yulia Kovtun, a graphic designer, said of her decision to join an opposition rally on Saturday.

In the former Soviet states, street protests play a pivotal role in opposition politics, one that is threatened by the new restrictions on gatherings brought about by the virus threat.

In Ukraine in particular, street protests are viewed as central to the country’s politics and a last line of defense against the influence of Russia, which backs the separatists. In 2014, street protesters toppled a pro-Russian president. Today, opposition groups say they are keeping a check on President Volodymyr Zelensky in the settlement talks with Russia.

On Wednesday, Mr. Zelensky’s government agreed to open direct talks with separatist leaders in eastern Ukraine, something the previous president had resisted for years and a potential breakthrough in negotiations.

The conflict has ground on as usual, with three Ukrainian soldiers dying in artillery strikes last week and tens of thousands more on both sides of a front line living in dank, packed barracks where social separation is out of the question.

Nevertheless, it remains unclear how the spread of the virus will affect the conflict, for now, said Anna Arutunyan, a senior analyst at the International Crisis group in Moscow. “Maybe there’s a shift in thinking about war,” she said. “What is the point of fighting now? Maybe it’s better to self-isolate, rather than sit in trenches.”

The policy shift by the Zelensky government, though, touched off several street protests in Kyiv, including one on Monday where a group turned up in white protective suits and masks.

Ukraine has seven reported cases of coronavirus. The Ukrainian National Security Council has said its intelligence reports show one case of infection in the separatist regions.

The government has acted quickly to close schools and the border to foreign travelers while the numbers of infected remain low.

The ban on street protests has been harder to enforce. At Friday’s protest, demonstrators carried signs reading “Don’t shake the Kremlin’s hand!”

“I am afraid of the virus and I think that Ukraine is not ready for the epidemic, but coming here is still my priority,” said Ms. Kovtun at one of the protests on Saturday. Despite the ban on public gatherings, the police made no attempt to disperse the crowd. But the Interior Ministry on Saturday proposed a new law that would criminalize “conscious endangerment of another person with a dangerous or very dangerous infection.”

Pavlo Bilous, a war veteran and one of the organizers of Saturday’s protest, said demonstrations must continue because the government would otherwise use the period of quarantines to ram through measures that would otherwise spark large rallies.

“We will come to the square to commemorate those who fought and died,” he said. “We risked our lives back then on the front line, so why should we be scared of some virus?”