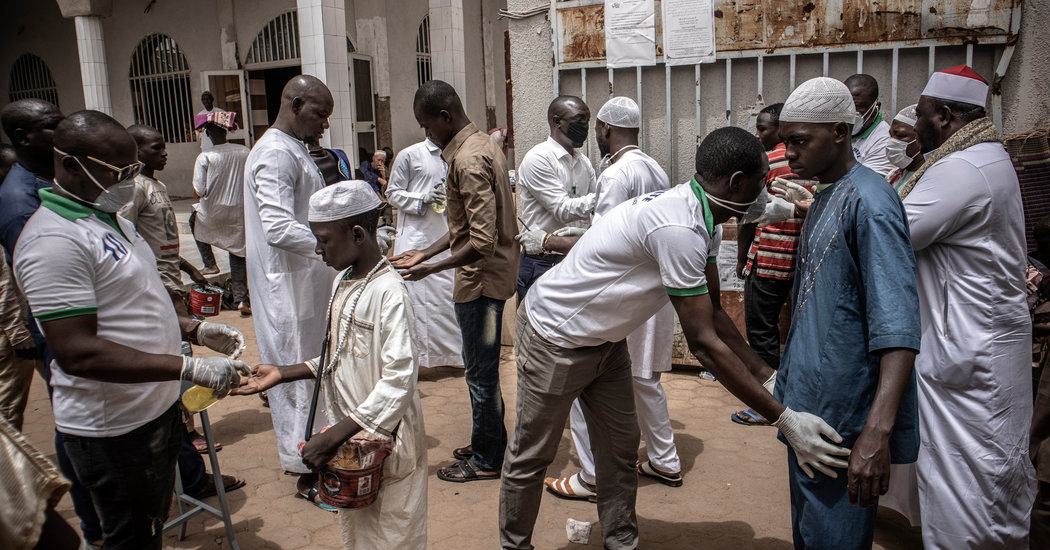 OUAGADOUGOU, Burkina Faso — Commuters on bicycles and motorbikes wove through traffic in this West African city wearing face masks to protect their lungs — but not against coronavirus. They were protecting themselves from the fine dust blowing in from the Sahara.

Widespread panic over the coronavirus has not yet arrived in this country and many others in Africa, even as the pandemic has swept across China, and now Europe and the United States.

Sub-Saharan Africa has not been hit as hard or as early by coronavirus, despite predictions by many experts who had warned that the high traffic between the continent and China, where the outbreak started, would set off the infection in Africa. Instead, it has been mostly people coming from Europe and North America who have carried the virus to Africa.

The first two cases in Burkina Faso were a husband-and-wife team of megachurch pastors, local celebrities, who contracted the virus after attending a Lenten prayer conference in France. Of the 20 cases now confirmed in Burkina Faso, two are members of the couple’s megachurch — and both are from France.

Several African nations, including Uganda, Ghana, Kenya, South Sudan and South Africa — the sub-Saharan country with the most cases — recently imposed travel bans on swathes of Europe and on the United States, countries that for years have set strict limits on Africans entering their borders.

But some experts said that people across the continent had yet to take the threat of coronavirus seriously enough, even though African presidents have begun announcing strict measures to try to prevent its spread.

“That’s the danger I’m worried about. We can’t wait for a repeat of what happened in China,” said Oyewale Tomori, a professor of virology and former president of the Nigerian Academy of Science.

As the number of cases on the continent has slowly climbed, reaching more than 410 across 30 countries on Tuesday, some African leaders tried to prepare their countries to prevent the spread of the virus. Senegal banned public gatherings, including religious ones. South Africa declared a national disaster and closed half its borders. Libya closed its airspace.

President Paul Kagame of Rwanda and Prime Minister Abiy Ahmed of Ethiopia posted videos on social media of themselves washing their hands, and challenged others to do the same.

In Burkina Faso, the government has closed schools and universities and banned public gatherings, but has enforced the measure haphazardly, and did not apply it to religious meetings.

The celebrity pastors, Mamadou and Hortense Karambiri, and their health were the talk of the open-air casual restaurants and mango tree-shaded drinking spots that dot Ouagadougou, a sprawling, sociable city. The couple leads a church of 12,000 members, and had held a service before coming down with symptoms. But the country is not in panic mode. Not yet.

On Friday more than 5,000 people gathered for prayers at Ouagadougou’s Grand Mosque, where men in face masks and latex gloves pumped disinfectant and soap into the hands of attendees.

On Sunday, services were canceled at the Karambiris’ megachurch, Bethel Israel Tabernacle, the streets around it deserted.

But elsewhere across the capital, thousands of men and women put on their Sunday best, climbed aboard their motorcycles, and zoomed to church.

Worshipers arriving at the central Assemblies of God church put their tambourines down to have their hands spritzed with sanitizer. The air conditioning was turned off and the windows opened. Communion was canceled.

“Don’t give in to panic, don’t give in to fear,” Rev. Jean-Baptiste Rouamba told his congregation, after a special announcement about hand washing, coughing into elbows rather than hands, and avoiding contact with sick people. “Fear is another kind of sickness.”

After services, he said in an interview at the gate of his church that he would cancel worship services if the government ordered it. But he said that his services had been more popular than ever since the outbreak, attracting up to 2,000 people.

If things got worse, he said, he would hold two Sunday services instead of one so that people could sit with a seat between them. Choir practice, Bible study groups and morning prayers were to go ahead as usual. But he said he was taking the threat of the coronavirus very seriously.

“If it got the Karambiri couple, nobody is safe,” he said, putting his hand on the shoulder of a young congregant who wore an airline eye mask over his mouth.

It has not gone unnoticed on the continent that the preponderance of cases originated from Europe and the United States. Last week, after Kenya announced that the country’s first case of coronavirus was a woman who had traveled from the United States through London to Nairobi, rumors began circulating on social media that Africans are immune to the virus.

“I would like to disabuse that notion,” said Mutahi Kagwe, Kenya’s minister of health, at a news conference. “The lady is an African, like you and I.”

Some warn it is only a matter of time, and that if and when it gets into the crowded residential areas of cities like Kinshasa, Lagos and Addis Ababa, the results will be disastrous.

Many African countries set up public health institutions in the wake of the Ebola outbreak that began in West Africa in 2013, and the African Union established the continentwide Africa Centers for Disease Control and Prevention, which coordinates the fight against outbreaks of disease.

“The Ebola outbreak was a wake up call for the entire continent that our public health systems and health systems as a whole were weak,” said Dr. John Nkengasong, director of the Africa C.D.C.

However, the continent’s public health systems have never been well-funded, and experts warned that this vulnerability, along with crowded conditions and poor sanitation in cities, and the unpredictable movement of populations, could make outbreaks impossible to control.

“I don’t believe, if we have a large influx of people with the virus, we can cope,” said Dr. Tomori.

Nevertheless, in Ouagadougou in recent days, life continued almost exactly as normal. Photographers jostled a stream of wedding parties into position in front of Ouagadougou’s fanciest swimming pool. Strawberry hawkers elbowed each other to get the best position to sell their wares at car windows.

More than 500 men gathered on Saturday in Samandin, a neighborhood in the capital city, for the inauguration of a new local crime-fighting group. Seeking shade in the 104 degree heat, they sat close together on plastic chairs under tarpaulins for more than three hours. There were no hand washing facilities, hand sanitizer or disposable masks to be seen.

Presiding over the ceremony was the Malgré-Naaba of Samandin, a traditional chief, who gave up his personal name when he assumed the role.

“I think we can manage it if we practice the correct behavior,” he said. He then warmly shook the hands of a dozen supplicants.

The Malgré-Naaba acknowledged that the government had forbidden such gatherings, but said the event was an exceptional case.

“This was planned in advance,” he said. “But coronavirus — that was not.”