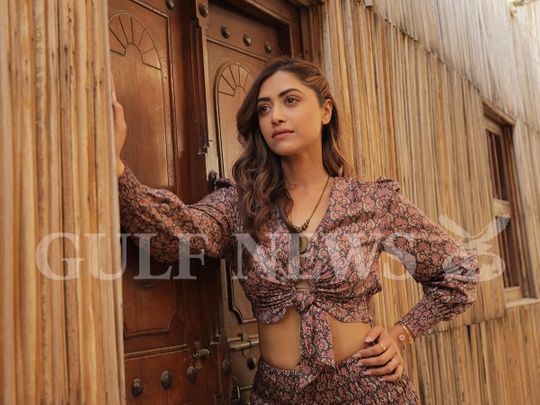 You can’t be too careful in the times of the corona outbreak in the UAE. Or so we learnt yesterday.

What was planned as an exclusive face-to-face interaction with South Indian actress Mamta Mohandas at her suite at a plush hotel in Business Bay on March 17 to discuss her experience of filming in Dubai was swiftly changed into a phone interview to ensure social distancing and safety of the actress as well as the Gulf News crew.

“It was super unfortunate that our plans changed at the last minute today. But we are living in the times of Corona and we have to be very careful in these times … Honestly, we did cancel some of the busy streets that we wanted to shoot in to avoid any possibility of exposure to the virus,” said Mamta Mohandas over the phone. She was merely five kilometres away from Gulf News, but we took a call to be cautious.

Mohandas was filming the music video of ‘Thedal’, a romantic song that chronicles the highs and lows of a couple living in Dubai, for the last three days in the UAE.

The ‘Forensic’ star shot in locations including The Paramount Tower & Hotel Residences, Palazzo Versace at Al Jaddaf, Barsha and areas near Zabeel Park.

“I am basically wiping down any door handle that I touch or any lift button I touch. I am using my elbow and the back of my palm to avoid any exposure … Filming in Dubai has always been fun, but right now we were working during a very sensitive period. Sanitising every surface that you touch and washing our hands thoroughly is all we can do,” said Mohandas.

The award-winning actress, whose credits include Malayalam blockbusters such as ‘Cellulloid’, ‘Passenger’ and ‘Kadha Thudarunnu’, is a cancer survivor. Her battle with Hodgkin Lymphoma (cancer of the lymph nodes) is well documented and she’s the poster child of being fierce in the face of adversity.

“People around me keep telling me that I need to be more careful … I get that and I am not being irresponsible about my safety either,” said Mohandas, who shuttles between Los Angeles and other parts of the globe for her work.

Her UAE-based producer of her recent music video filmed in Dubai, Mini Sarma of 7 Media, was equally particular about the safety of Mohandas and her crew. The music video was directed by Fujaiah-based director Sachin Ramdas.

“We kept our crew during the filming minimal. It was just 25 people who are based in the UAE itself and there was no foreign crew who worked on our music video. Our filming was very smooth and swift. There was no crowd in any of our shots,” said Sarma in a separate interview.

Sarma has been in the business of film production for over a decade and is the line producer of Bollywood blockbusters including Shah Rukh Khan-starrer ‘Happy New Year’ and Akshay Kumar’s ‘Laxxmi Bomb’, both of which were filmed in the UAE. Her crew took all the necessary precautions to ensure a smooth production.

For Mohandas, it wasn’t just her filming that came under the scanner due to the coronavirus pandemic. Her recent thriller ‘Forensic’ starring Tovino Thomas was showing in UAE cinemas until the shutters came down due to the outbreak.

“We had amazing initial collections for ‘Foresnic’. But coronavirus fears and this entire fear of pandemic has affected my Middle East release. But I have no complaints. This situation is a rare one that occurs. When people feel it is safe to return to the movies, we can always reopen our films … It’s unfortunate, but our safety comes first.”

While filming in the times of coronavirus is a sobering subject, Mohandas ensured that our conversation over the phone was upbeat. Here is her take on…

Singing and being a part of the music video Thedal:

“I recorded the song and my team thought I will be too busy to feature in the video or that I would charge a bomb. But I turned around and said that I am going to take complete ownership of this. I did not want my voice and have somebody else say my lines. But this was my single and I thought it was the right opportunity to take ownership of it… From my heart, I am a singer. I used to be all about music before I entered films. I didn’t know the difference between a producer and a director back in the day, but I knew all about songs. I used to spend my free time writing songs and printing out lyrics.”

“Filming in Dubai is always fun. I have been here for work several times for Malayalam and Telugu films… But working in a music video gives you a lot of creative space and gives you a lot of scope to experiment. The world’s a stage for us actors finally.”

Being the queen of evolution in Malayalam cinema:

“I had a lot of hiccups in my career because of my health. Had it not been for that I would have been able to use that time to do a lot of things on my career front in terms of exploring different mediums. But I am happy to be still here. I promise to be a part of this evolution.”

Playing a fierce-but-glamorous cop in her latest thriller ‘Forensic’:

“The idea was not to be glamorous… Many give the word ‘glamour’ the wrong meaning. Why is that they don’t see the acting behind a pretty face or the efforts that go behind our roles. I was telling my director that I wanted Hrithika to look haggard, tired and overworked … Besides, we have so many conventional ways of presenting a Malayalam-speaking female cop in our films, I wanted to do it differently and I am happy with the way my role turned out.”

“I live in gratitude for every moment of my life. It doesn’t feel like 15 years though. There were years in the early days of my career where I lived my life in a haze. I have subtracted those years mentally where I was absent in many ways. Overall, my career, my life and my work has been a lot more relevant after 2009. 2009 was the year when cancer appeared for the first time in my life and I turned my life around since then.”

Being a cancer warrior that millions look up to:

“Just wear your heart on your sleeves and live your life to the fullest while you are still here. Cancer makes you love life to its fullest and it makes you less needy for a lot of things. I also think cancer teaches you a certain sense of safe detachment. You learn to be more pragmatic about things and you are more aware of your emotional intelligence. My silence is very important to me.”

Being silent about political issues or not using her voice like Deepika Padukone or Sonam Kapoor from Bollywood to weigh in on important issues around the globe:

“I am someone who keeps quiet very often when there’s issues raging on social media. My question is, ‘Do we really need to give an opinion on everything? Do we all need to be Donald Trump?’. Also, certain issues in India reach me after it has died down as I live in Los Angeles, another part of the world. Sometimes, I am simply not aware of it or I am busy with my own life. I don’t feel the need to be constantly relevant… You are the best judge of when you want to speak. I don’t want to comment on something because very often I don’t have a black or white answer to those questions. If I cannot have a dialogue then I may as well shut up and mind my own life.”

Being blasted for her statement that was perceived as victim blaming in sexual assault crimes:

“It was different from what a woman would normally say and the whole world pounced on me … I reacted to it once and if they completely twist my words, what can I do about it? I am here to act in films.”