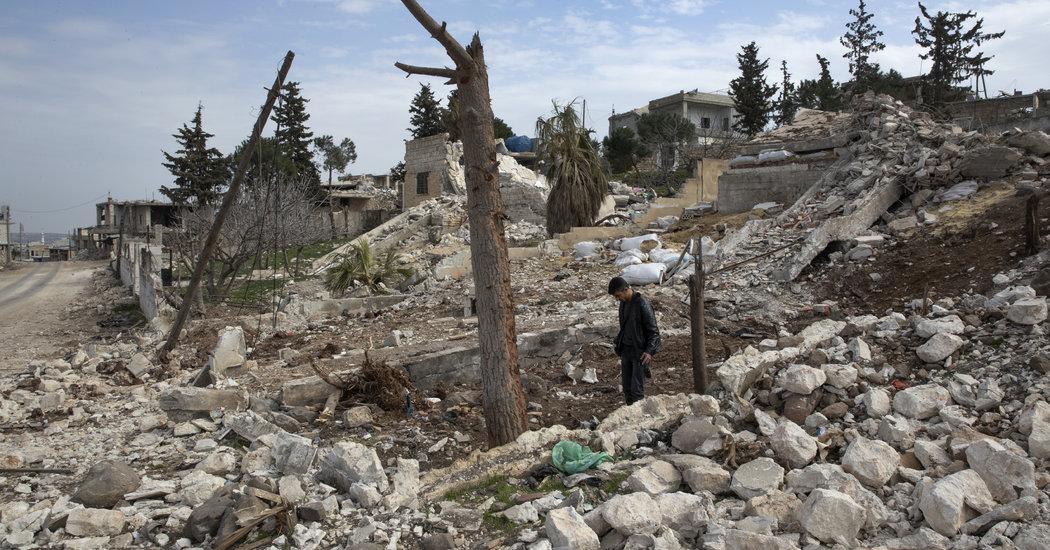 BALYOUN, Syria — Families sifted through the bombed-out ruins of their shops and homes on Thursday in the front-line Syrian town of Balyoun, using a fragile cease-fire between Russia and Turkey to retrieve their belongings but voicing little trust that it would last.

“We will never come back,” said Isam Alloush, a flash of sorrow crossing his face.

His truck was piled high with mattresses and a galvanized water tank he was taking to a camp near the Turkish border, where eight members of his family are living in a tent. “It’s a big lie,” he said of the cease-fire. “They have been cheating us for years.”

Balyoun is one of a line of ghostly, battered towns and villages across the southern half of Idlib Province, emptied of their inhabitants over three months as Syrian government forces, backed by Russian air power, blasted their way northward in an effort to seize control of the last rebel-held region in Syria.

South of the city of Idlib, the towns and villages were mostly deserted, the smashed buildings and shrapnel scars on walls clear signs of the heavy aerial bombardment and artillery fire over the last several weeks.

Residents gathering their belongings said they had fled the bombardment in a rush and were now living in tents or the shells of buildings near the Turkish border. Nearly one million people have been displaced in the past three months, most of them now crammed into a narrow stretch a few miles deep along the border.

The onslaught ceased 11 days ago, when President Vladimir V. Putin of Russia and his Turkish counterpart, Recep Tayyip Erdogan, agreed on a cease-fire, spurring Syrians to race back to their villages to salvage what they could.

A Russian surveillance drone buzzed above for several hours, forcing people to seek cover in the ruins, but otherwise the skies were quiet. The crash of a single artillery shell sounded in the distance — fired by Syrian government forces, civil defense teams said.

Civilians said they hoped the cease-fire would turn into a lasting peace, but few said they believed the Russian-Syrian offensive was over.

“If there is a real cease-fire and a real agreement, we will move back,” said Mahmoud Masri, 42. “We trust the Turks, but we don’t trust the Russians because they slaughtered us.”

The situation in Balyoun exposes the flaws in the cease-fire agreement. The town remains in rebel hands and marks the front line of the Syrian forces’ advance.

But it lies six miles south of the M4 highway, and so is excluded from the de-escalation zone that is to be jointly patrolled by Russian and Turkish troops.

Residents overwhelmingly said they would not stay if the Russians brought Syrian government forces to the town.

Backed by Russia, the government of President Bashar al-Assad of Syria has been set on regaining control of two strategic highways that cross Idlib Province: the M5, which runs between the capital, Damascus, and the northern city of Aleppo, and the M4, which links eastern and western Syria.

Mr. Erdogan, who backs Syrian groups opposed to Mr. Assad, had insisted that government forces withdraw to positions agreed to with Moscow in 2018 that planned for both highways to be demilitarized zones.

Mr. Erdogan has deployed close to 10,000 troops and armor into Idlib Province in the last three months to try to stall the Syrian advance, which threatens to force several million Syrians into Turkey.

Yet the March 5 cease-fire agreement has fallen far short of Mr. Erdogan’s stated demands. It essentially recognizes the new reality, ceding control of the M5, and the towns along it, to the Syrian government and opening the M4 to Russian forces.

The deal has left hundreds of thousands of people unsure they can ever return home. The strategic cities of Maaret al-Numan and Saraqib on the Aleppo-Damascus highway remain in Syrian government hands, and few residents will risk returning.

Under the terms of the agreement, the M4 highway, which runs across the lower part of Idlib Province, is to be a demilitarized zone, patrolled jointly by Russian and Turkish forces. Yet, the first patrol was abandoned on Sunday after protesters burned tires to block the road.

In Balyoun, sandwiched between the M4 to the north and Syrian forces to the south, the yielding represented by the latest agreement is particularly sharply felt.

“Of course it is worse,” Abdul Ghani al-Huqman said as he prepared to leave with his brother driving a truckload of furniture. “We are between the M4 and the regime. No one is living here.”

It was in Balyoun that at least 36 Turkish troops were killed two weeks ago in airstrikes. There was little doubt the strikes were delivered by a Russian warplane, according to members of an observation team that tracks the activity of planes over Syria and local civil defense teams who helped with the rescue effort.

A line of blasted rocks and craters gouged in the earth marked where 13 missiles had struck the Turkish soldiers as they sought cover in several stone villas. Shredded military uniforms and an army boot sliced in half lay on the ground in the yard of one house. Metal debris and the bulletproof windshield of an SUV, shattered but still in one piece, were across the street.

Analysts said the strike seemed intended as a sharp rebuke from an impatient Mr. Putin to deter Turkey from blocking Russian and Syrian forces from defeating the last vestiges of the opposition. Instead, it led Mr. Erdogan to reinforce his military posture in Idlib and appeal for support from NATO allies to prevent a refugee crisis as Syrians threatened to flood the Turkish border.

Yet, Syrians remain unsure whether Turkey can really hold off another Russian-Syrian advance.

“Tell your President Trump to stop this suffering,” Mosa al-Sheikh, 35, the owner of a furniture shop on the town’s main shopping street, said in English.

“Turkish soldiers died here,” he said. “The Russians and Assad are striking every day. They don’t let us live.”

In the city of Ariha, a conglomeration of concrete apartment buildings astride the M4, some people have dared to return but feel no more reassured.

Wahida Sankar Graibi came back with her family during the bombing because she could not bear camping with scores of other families in a school.

“We are very afraid,” she said, “but it is better to die in dignity than living that life.”

She stopped to talk on the main square of the city, where three men sat on plastic chairs selling cartons of cigarettes.

They had lived under bombardment, with little food or water, and had begged bread from the armed fighters, Ms. Graibi said. A few shops were opening, but there was no work and families were going hungry, she added.

“Tell the international community to send relief to the cities like Ariha,” she said. “We need it now, not later.”

And they remained poised for flight if the fighting resumed, she said.

“Now we understand that we have to just take one bag and run away,” she said. “We decided that if we are displaced again, we will go straight to the Turkish border. We will not go anywhere else.”