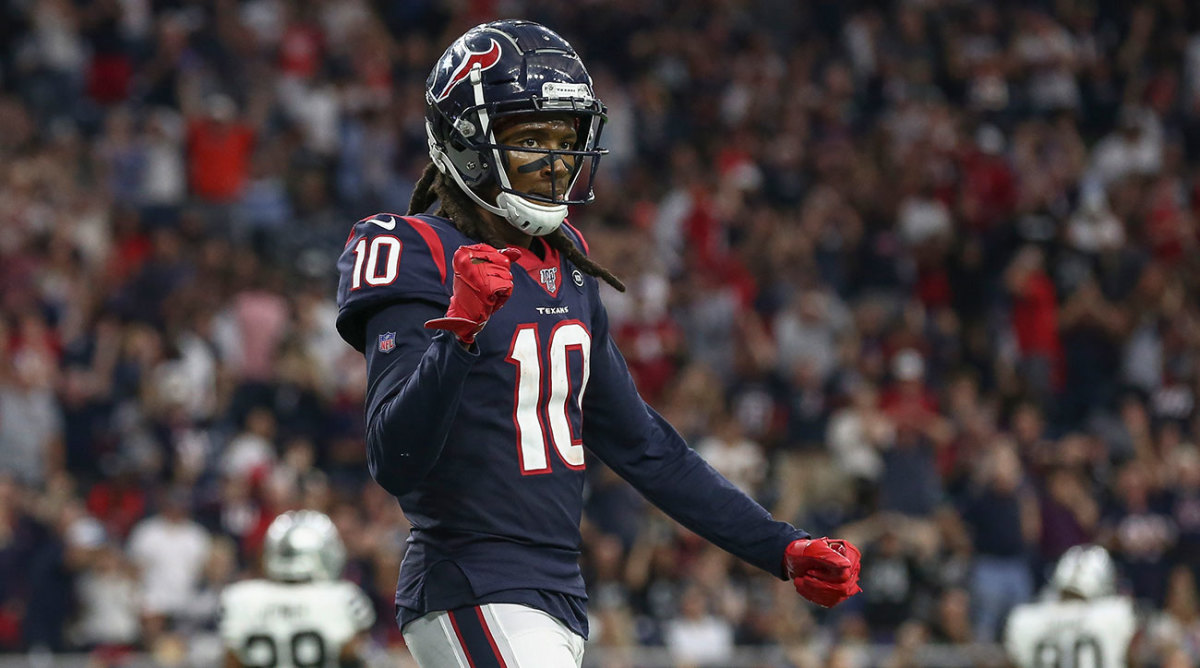 Sometimes I wonder if the league should just hire someone to swoop in at the end of any big decision-making process to ask, “Are we doing the right thing?” I think it would have saved them a lot of trouble the last few years…

• And while we’re there, I couldn’t find a single team official—not one—who thought the league did the right thing going forward with free agency on Monday. The work continued, of course, if it was a little disjointed. One team held a morning conference call with its football staffers to get its ducks in a row ahead of the tampering period opening. Another conducted some decision-making processes via video conference. To those I talked to, the whole thing felt weird and, as one NFC coach put it “totally unnecessary” to start free agency under these circumstances. But since it happened, we’re going to cover it.

• The jaw-dropper of the day, of course, was the Texans’ trade of star receiver and three-time First-Team All-Pro DeAndre Hopkins to Arizona. Houston packaged the 27-year-old with a 2020 fourth-round pick to the Cardinals for RB David Johnson, a 2020 second-round pick and a 2021 fourth-rounder. Sounds like a short return for a great player, right? Well, it is. But Hopkins’s name has been whispered as a trade possibility in NFL circles for two years, and part of it involves his feeling that he’s underpaid. And then there’s the relationship between Hopkins and the team. While things weren’t nearly as off-the-rails as they’d gotten with Jadeveon Clowney, I’m told there was friction between Hopkins and the coaches that contributed to all of this. Which sure seems like it’s Arizona’s gain.

• As for where Hopkins is going, there are three key points to make on the Cardinals’ big swing. First, assuming the receiver gets the new contract he wants, this is Arizona taking advantage of having a star quarterback on a rookie deal—an edge that the Eagles, Rams and Chiefs rode all the way to the Super Bowl over the last few years. Second, as good as Kyler Murray is in broken-play situations, Hopkins gives him a counterpoint that should be just as much of a problem. Imagine having to track Murray in the open field with Hopkins running through your secondary. That’s a problem. And third, the move frees GM Steve Keim and coach Kliff Kingsbury to augment the offensive line or bolster the defense with the eighth overall pick—where they’ll be prime position there to pluck one of the class’s elite tackles. All in all, this is a really, really nice move by Arizona.

• The other big trade of the day really illustrates how the 49ers do business, sending DeForest Buckner to Indy for a first-round pick. The team’s already got Dee Ford at $18 million per year, and knew they had three guys on rookie deals who’d wind up getting into that neighborhood eventually—Nick Bosa, Buckner and Arik Armstead. And going into the offseason, they considered trying to tag-and-trade Armstead, like the Seahawks did with Frank Clark and the Chiefs did with Ford last year. In the end? They could get more for Buckner, and bring back Armstead for a little less than it cost to keep him. So looking at it globally, the Niners keep one player from the strength of the team, albeit the one most believe is the lesser piece, and get the 13th pick in the draft. That pick will either be a high-end, cost-controlled player or, if they trade down, multiple guys who are economical. Altogether, I’m sure the Niners hated to move on from Buckner—for the first three quarters of the Super Bowl, he and Bosa were the best players on the field on either team. But as far as sustaining the roster, this was the best way for San Francisco to pull the levers it had available.

• And I like the move for the Colts, too. GM Chris Ballard has hoarded cap space the last three years, and moved judiciously with his money, doing well with second-tier signings on the veteran market. The reason? It’s hard to find true blue-chip players out there—mostly because teams hold on to players like that. And a player like Buckner wasn’t going to be there for him in free agency, nor was he going to be available with the 13th pick. So with a roster that’s pretty well-rounded, he filled a big need with a dominant player. Now, he’s got to find himself a quarterback. And there are options (Philip Rivers, Nick Foles and Marcus Mariota) that would be nice replacements or competition for Jacoby Brissett. Just look at the young talent on the roster. The Colts could be pretty good next year.

• The Bears’ quarterback situation remains muddled, but it may not be for long. My understanding is the focus has been on Cincinnati’s Andy Dalton and Jacksonville’s Nick Foles. And which one lands there as the competition/replacement for Mitch Trubisky could well boil down to where GM Ryan Pace finds a better deal. Foles played for new quarterbacks coach John DeFilippo in Philly, where the head coach, Doug Pederson, is a former Matt Nagy co-worker. And Dalton played for new offensive coordinator Bill Lazor in Cincinnati.

• Give new Browns GM Andrew Berry credit—the issues the “analytics” front office had coming out of the gate in 2016 in Cleveland (Berry was a top lieutenant to Sashi Brown) haven’t been apparent in 2020. Quickly, he was able to land a top tight end (Austin Hooper) and a solid tackle (Jack Conklin) with background in the Shanahan-style system that new coach Kevin Stefanski plans to implement. And they also brought in a quarterback, in Case Keenum, who has background with Stefanski and the Shanahan system and should be a fantastic resource for Baker Mayfield.

• Once again, offensive linemen got paid. Jack Conklin came in at $14 million per year, Graham Glasgow got $11 million per, and Halapoulivaati Vaitai and Ereck Flowers are now at $10 million, while guards Brandon Scherff and Joe Thuney got tagged at a franchise number driven by a more lucrative market at tackle. That’s following previous offseasons during which guys like Nate Solder, Trent Brown, Andrew Norwell and Ryan Jensen set new standards at their respective positions. The reason? There aren’t enough functional linemen out there. So if you’re even a good one, you’ve got a serious supply/demand dynamic working in your favor.

• It was four years ago that Titans GM Jon Robinson, still in his first year, dealt away promising, but troubled receiver Dorial Green-Beckham for Eagles swing tackle Dennis Kelly. Green-Beckham had 15 games left in the NFL. Kelly, conversely, has had incredible value as Conklin’s battled injury problems, and now figures to replace him at right tackle, coming in at half the price of Conklin for the next three years. Kelly’s still just 30. And at the very least, he gives Robinson and Mike Vrabel flexibility and time in finding a long-term replacement for Conklin. Which illustrates what a great under-the-radar move that 2016 trade was.

• Credit to the Saints for finding a way with David Onyemata. I figured he was good as gone, with New Orleans having so many mouths to feed over the next couple years. But the team got creative, and is keeping one of the more underrated picks in the string of stellar draft classes that Sean Payton, Mickey Loomis and Jeff Ireland have reeled off the last four years. (It also makes you wonder about Sheldon Rankins’s future with the team).

• Buckle up! More action left to be had on Tuesday…